If there is one book that really propelled me into studying the myriad issues of Topps Chewing Gum, the 3rd edition of the Sport Americana Baseball Card Price Guide (Beckett 3) is it. 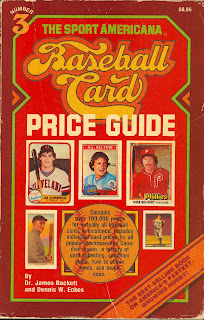 To be fair, everyone calls these "Beckett" books but Denny Eckes was the man behind the card research and Dr. Jim was the numbers guy; Beckett just had a better PR machine! As an aside, I received a very informative e-mail from Mr. Eckes' daughter after he had passed away, which led me to the conclusion he was an extremely nice and gentle man with an unabiding love of the hobby.

Within its pages were some great shots of rare cards in full color and, more intriguingly to my oddly focused nineteen year old mind, an article on old Topps uncut sheet quadrants from 1952 and a 100 card '54 sheet. The '52 sheet (high numbers, no less) captured my attention to be sure, but the writeup on the '54 sheet did not take hold for a while. Then one day, after sussing out a '67 high number sheet from a hobby article (remember, "oddly focused") I decided to work up the '54 sheet array from the photo in Beckett 3. What I found was that the numbering ran from #126-150 and #176-250. This left me somewhat nonplussed. 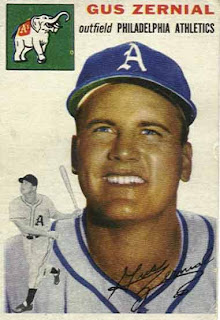 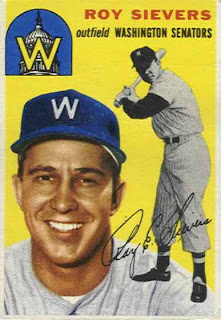 This is Sy Berger's favorite set by the way.

Now, did they issue packs with cards from only one 100 card half-sheet or were they mixed together? Mark Murphy's Unopened Pack, Wrapper & Display Box Guide details a fifteen card '54 cello pack with cards in the "4th" series, which could mean it spanned both sheets (see below). Unless a lot of '54 nickel or cello packs are opened someday (unlikely as so very few exist) we may never know.

The penny packs would not reveal the answer but their wrapper looks nice! 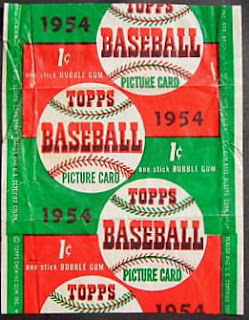 This is how the hobby papers and guides viewed the 1954 Topps series years ago, note the span of series 4:

Current thinking is that 1-50, 51-75 and 76-250 are three distinct series, with the middle being almost twice as valuable as the other two. I am not so sure about that. I think there were only two series: 1-50 and then all the rest came out in one big whoosh, possibly staggered geographically but maybe just box to box.

What is pretty cool though, is that some of the glass printing plates from the sheet shown in Beckett 3 still exist and were auctioned a little while back. These were described as from Lord Baltimore Printing, in Baltimore, MD. Half of the sheet is represented. Note how every other row is flipped due to full color bleed top borders: 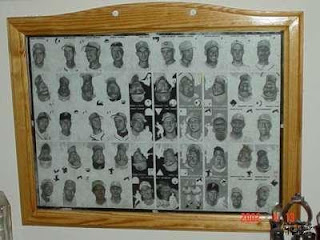 Some detail of the glass plate: 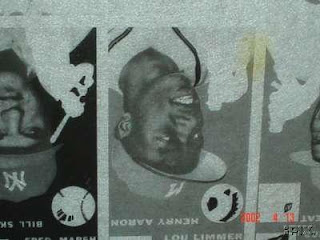 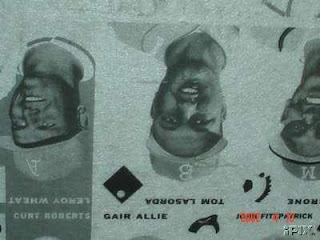 Not quite sure what this was, maybe copies of the cards on the glass plate? 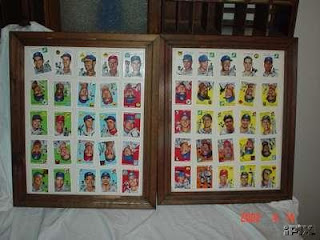 For those who are interested by such arcana, Topps baseball cards from 1952-54 were printed on 100 card half-sheets, in 1955 they were most likely printed on either 100 or 110 card half-sheets (possibly the first series was on 100 then the size changed to 110 for later series) before converting to the standard 132 card half-sheet in 1957 for the new, smaller (yet "standard") sized cards. 132 card half-sheets were used during the entire post '56 Topps vintage era for their annual sets, in arrays of twelve rows with eleven cards per row.

I would spend hours going through my Sport Americana Baseball Card Price Guide looking at all the different sets and making countless lists of cards I wanted to find.

I bought the 1st edition, and it became an annual purchase. Each year they had different things highlighted in the color section like wrappers and press pins.

I remember meeting Denny Ecks at a card show in the Baltimore area and asking him to autograph my Price Guide which I had with me at the show.