It recently occurred to me that I have not managed to show a full cover run of the Topps Rookie Banquet Programs from 1959-66.  Given out at the annual awards banquets hosted by Topps brass every fall, the programs from these events are coveted collectibles. 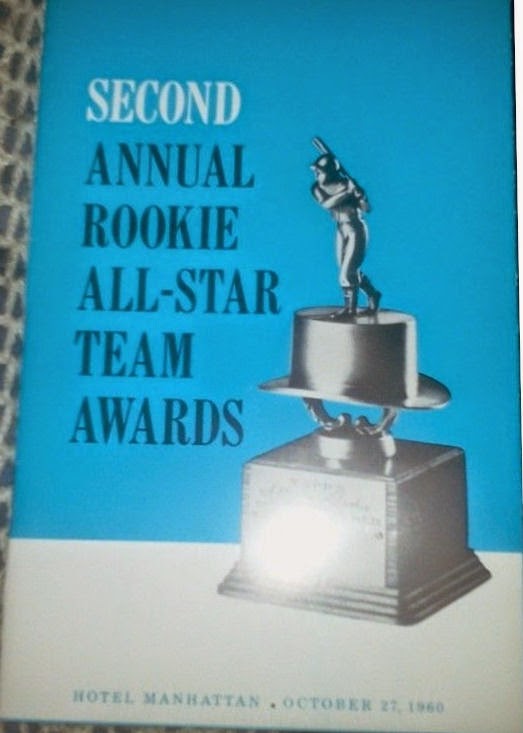 Not the best shot but it shows the trophy in great detail.

Our last missing piece is the 1965 version and it's a beauty, if slightly cut off in this scan I nicked from 4192cards.com. 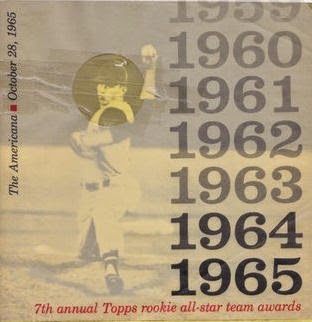 The interior is fairly typical: 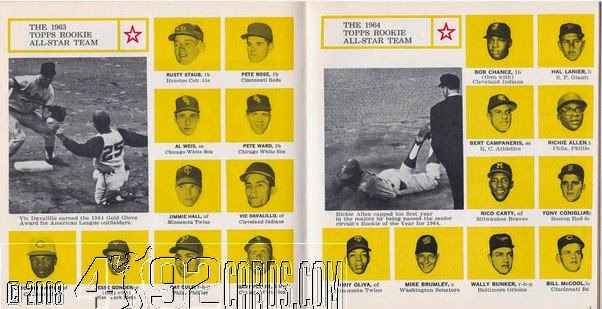 The venue was The Americana Hotel, which is now the Sheraton, just north of Times Square in NYC; a hotel where I have attended a few dinners myself over the years.

As noted in a previous post, these banquets turned into the Baseball Achievement Awards in 1967 and resulted in a much smaller (and cheaper) program being distributed. They still have the dinner every year from what I can tell and this will be the 55th year the rookie awards have been handed out.

Now the most famous banquet program in 1964's as Topps released a boxed card set that year.  36 oversized (3" x 5 1/4") cards came in a real snazzy foil enhanced slipcase and now go for quite impressive sums.  However, Topps also printed a program that year, it's just smaller than the other rookie banquet programs and fits in the slipcase that held the cards: 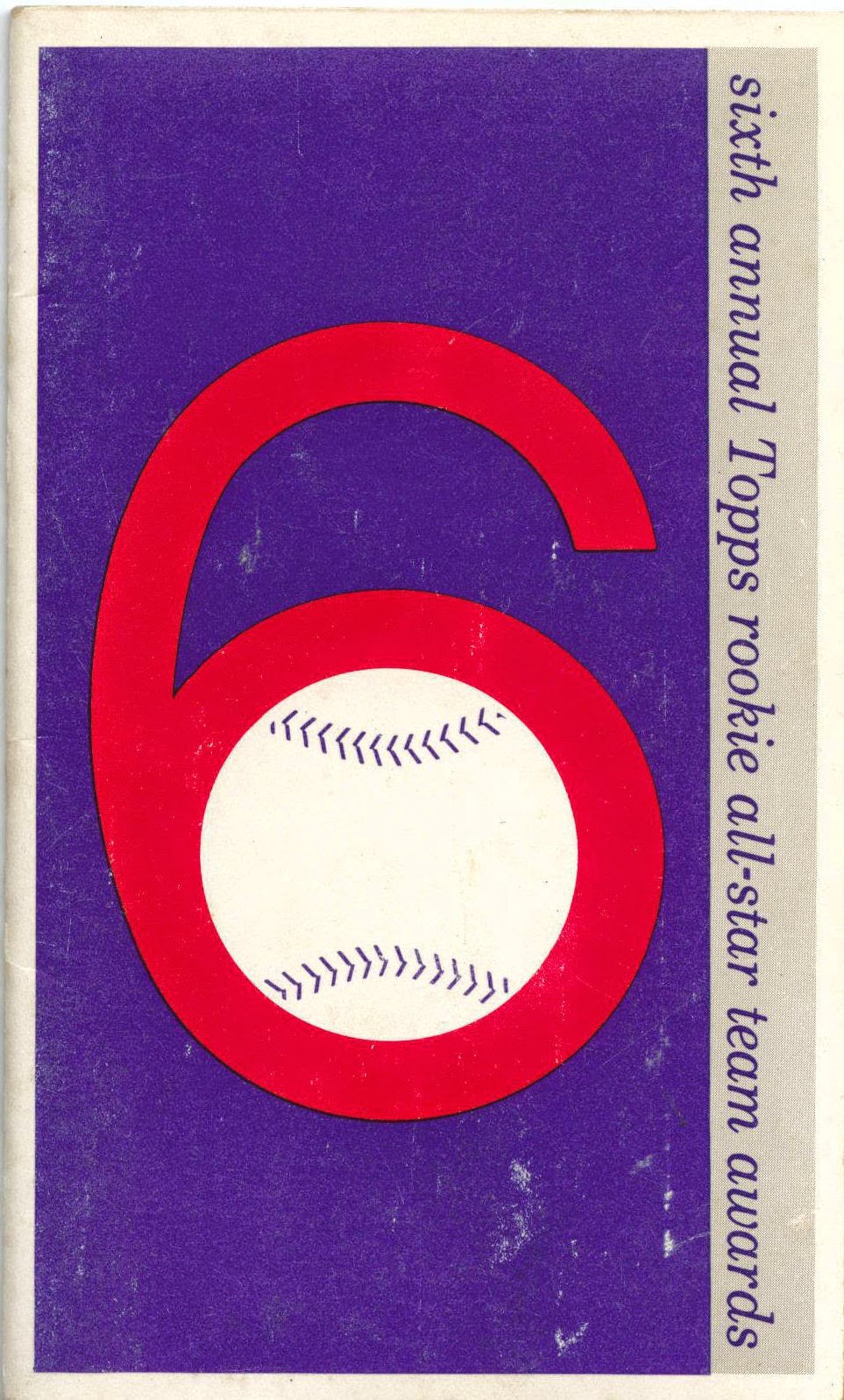 It is said the interior matches the card set with one exception - Luis Tiant, the Topps Minor League Player of the year (card 34A). I don't know if this is true or not so if anyone has the skinny, drop me a line.

Here is the slipcase for comparison: 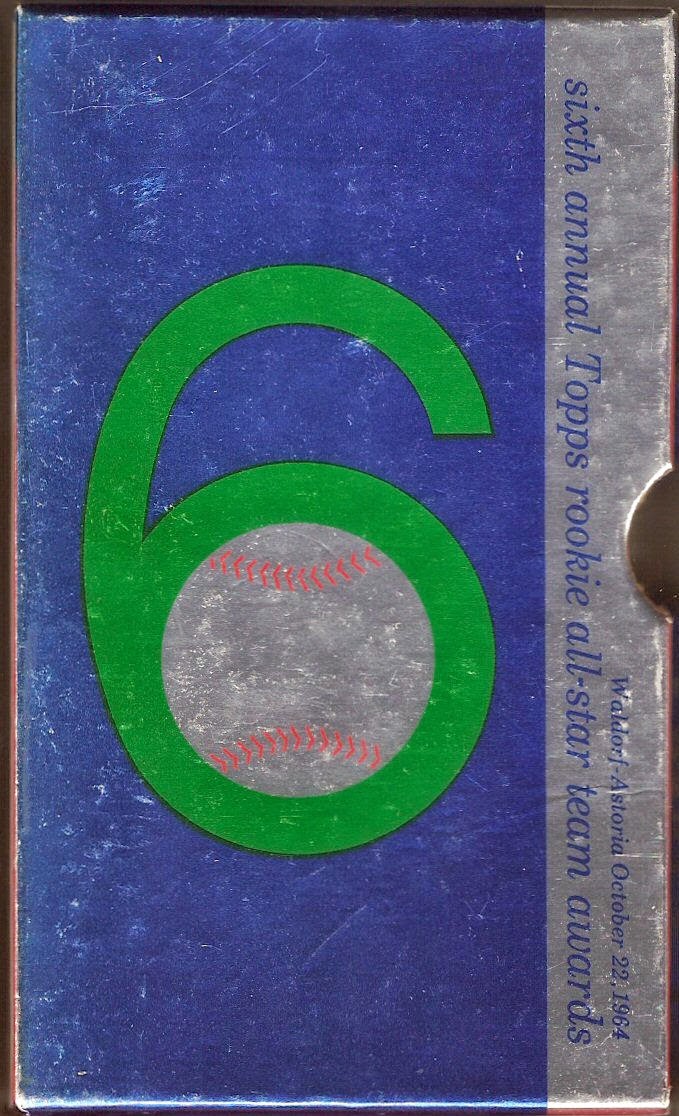 I believe the '64 program is the toughest one of them all-it rarely seems to come with the card set and not too many have turned up over the years. The 1964 "program" is one of the great all-time Topps items IMHO.
Posted by toppcat at 2:00 PM 2 comments:

Topps test issues from the 60's are tough buggers to track down, especially when they involve metamorphic cards such as today's subject: Fold-A-Roos. Generally ascribed to 1966, the actual date of issue is not certain. What is known is that they came in a typical Topps test pack: 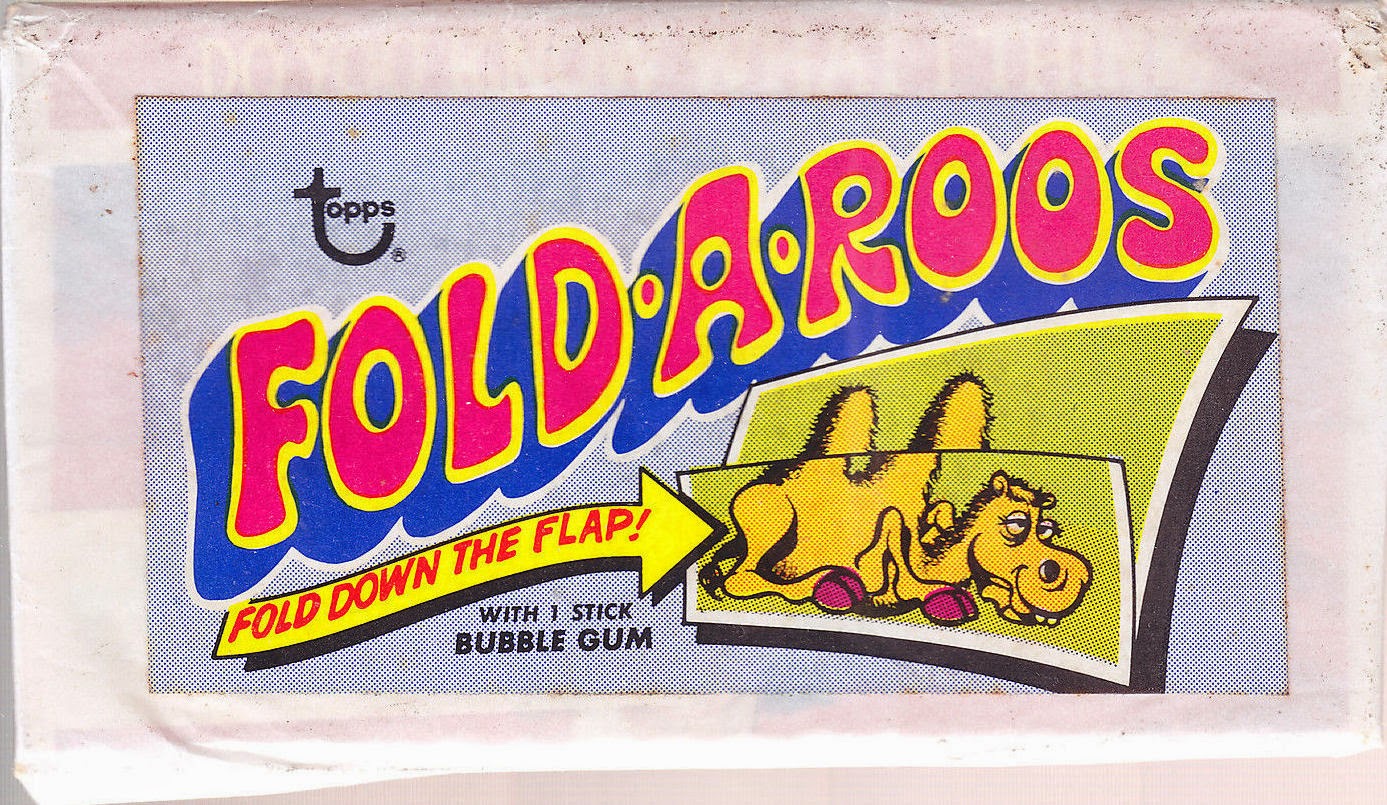 The curved-t Topps logo debuted in 1966 but I don't believe the little registered trademark symbol was added until 1967 nor did these style packs debut until then.  Given that and the slightly psychedelic lettering, I would place the date at 1968-69.

There are 24 known subjects, skip numbered to 36,which look like this in their folded state, as per a Legendary auction a while back: 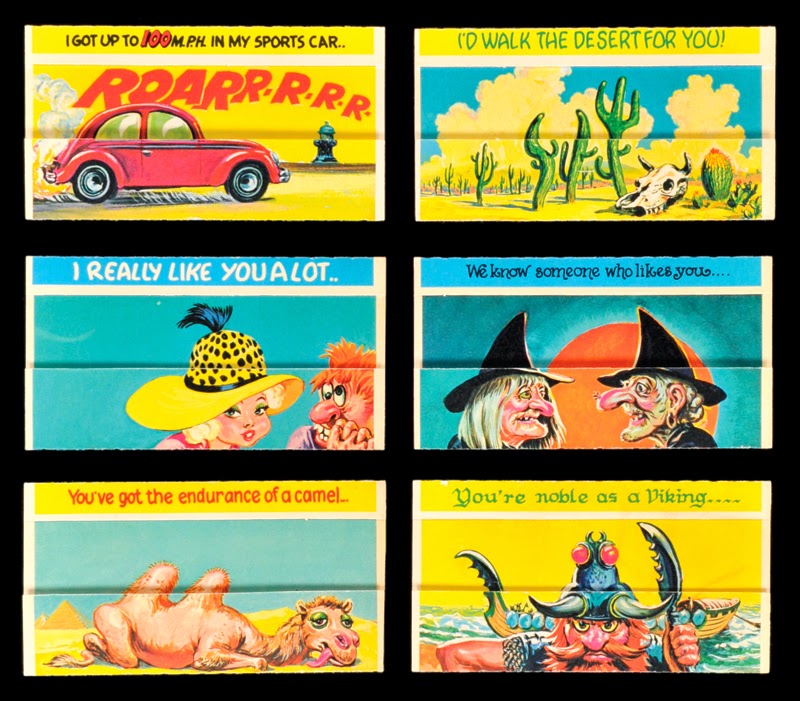 You would unfold the "card", which was made of paper, to reveal a funny response.  For instance, the "I got up to 100 MPH in my sports car" comment is followed by "...the day I saw a fire breathing dragon, as this illustration from Chris Benjamin's The Sport Americana Guide to the Non Sports Cards shows: 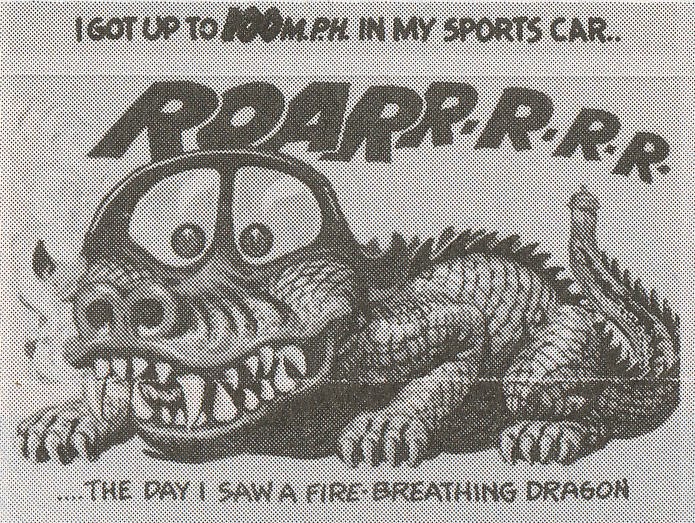 I've resorted to a b&w scan as these are scarce and I don't own one. I had to clip a reverse extract from Chris Watson's Non-Sports Bible:

Yes, they are numbered and examples are known up to #36, which appears to be the end number based upon the above scan mentioning "30 of 36".  Bob Marks wrote a great article in The Wrapper #68 about the set and noted original artwork was known for both issued cards and unissued ones. The amount of unissued artwork led him to believe there were more than 12 additional subjects being planned but if the first series was to consist of 36 only, that means a second series must have been contemplated.  Marks also noted the "answer" flap was part of the reverse as issued, lightly glued down until the card was opened. It would appear the flap would be brought around to the front and cover up the previous bottom part of the card, which would also unfold downward along the center fold.

The Fold-A-Roos gimmick essentially reversed Mad magazine's Fold-Ins, drawn by the inimitable Al Jaffee. They measure about 2 1/2" x 4 11/16" in its closed state and the height increases to 3 9/16" once unfurled, according to Benjamin. They must not have tested well and may have been a bit hokey, even by the standards of the day.

Posted by toppcat at 7:00 AM No comments:

Topps' seemingly never-ending quest to dominate at all levels of the "jobber" retail trade during the baby boom era led to some pretty bizarre doings at times. Some affinity program offers in 1963 perfectly illustrate this point.

Topps was clearly looking to increase their shelf presence in the drugstores of the day by putting three small bottle of Bufferin into their 240 count Bazooka boxes. Bufferin must have sent a lot of tiny bottles to Topps to make this work: 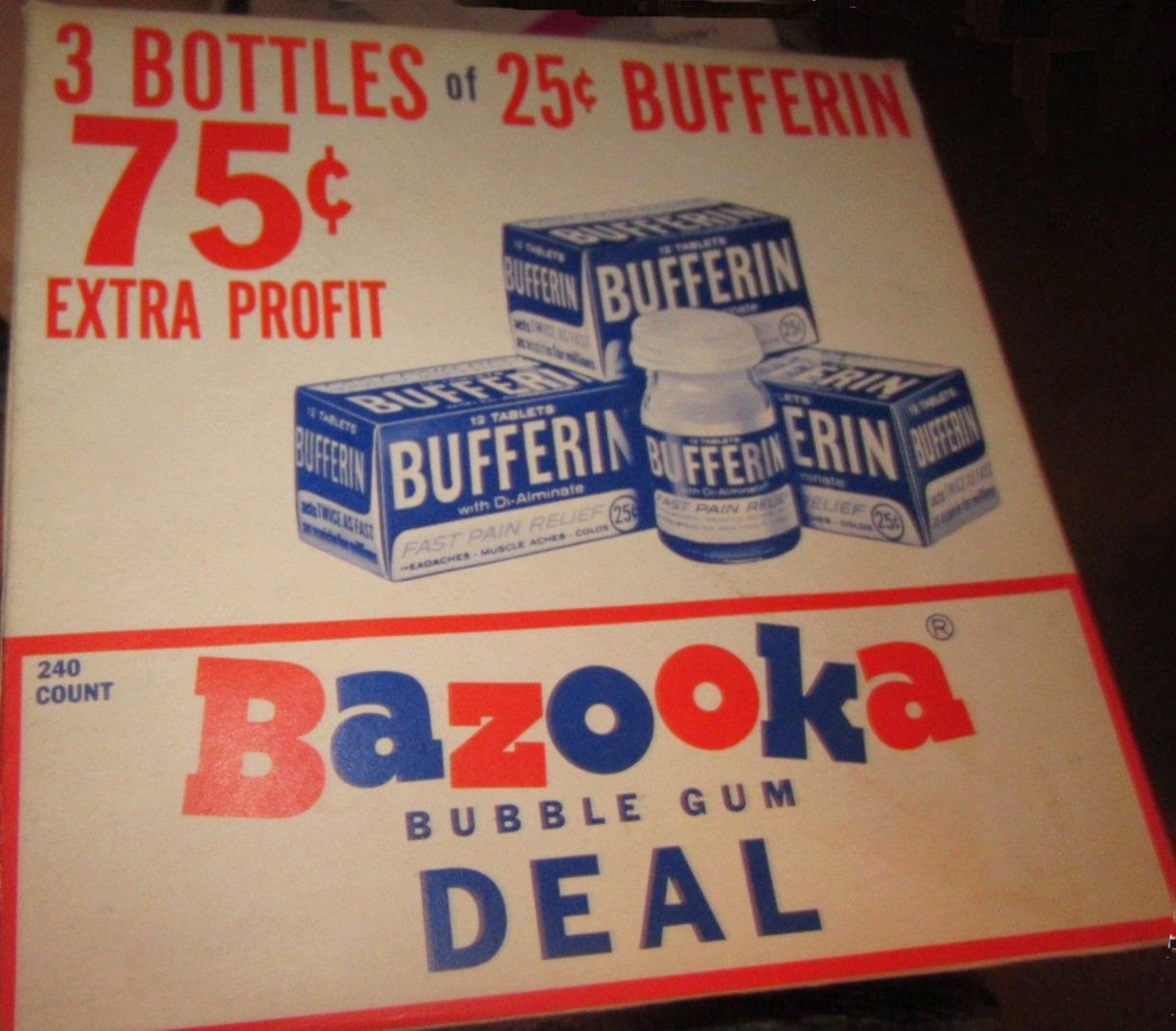 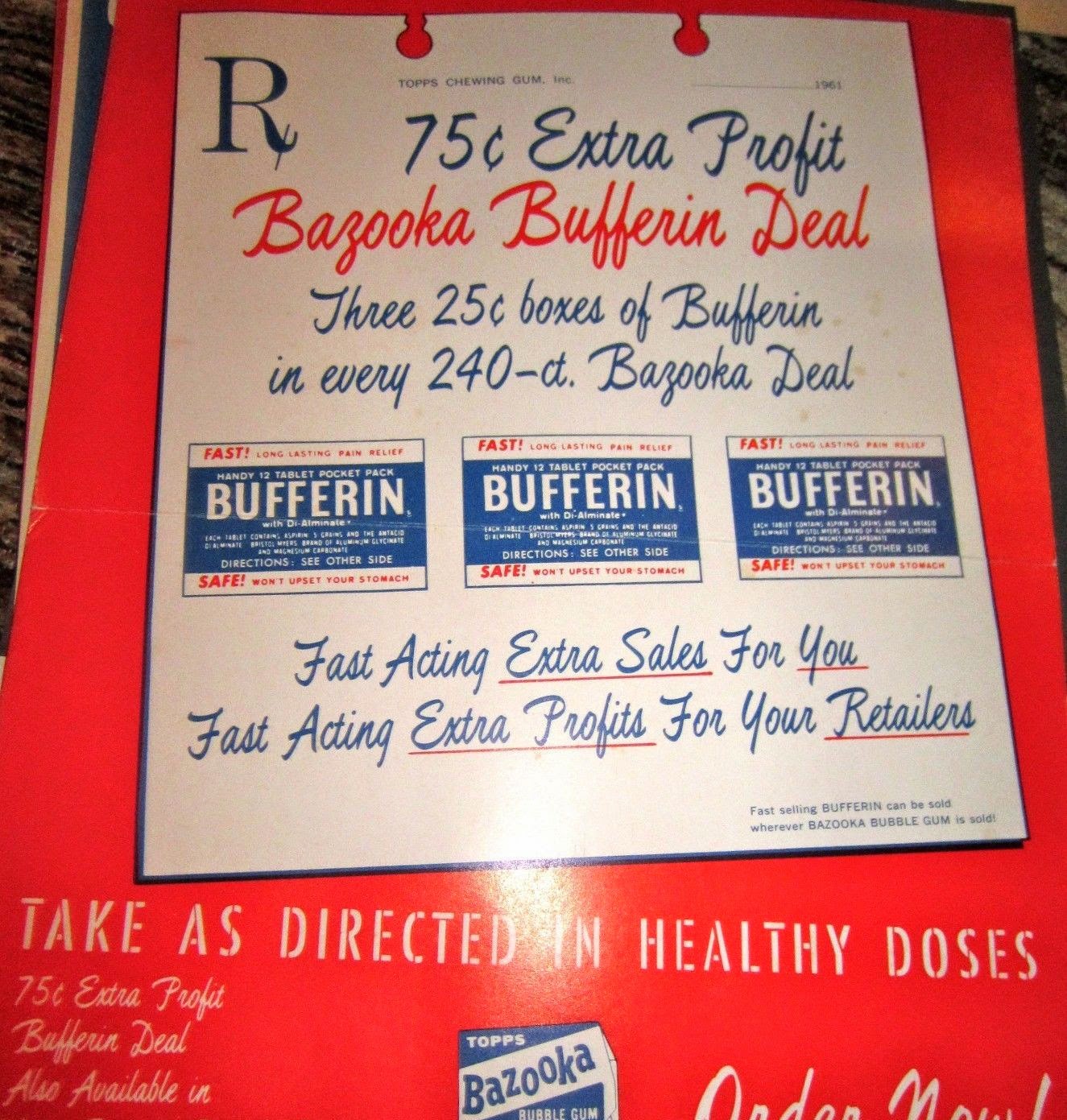 This is just the tip o'the iceberg though as a whole host of wellness and personal care products were inserted into Bazooka boxes in 1963.  Sore throat?  No problem: 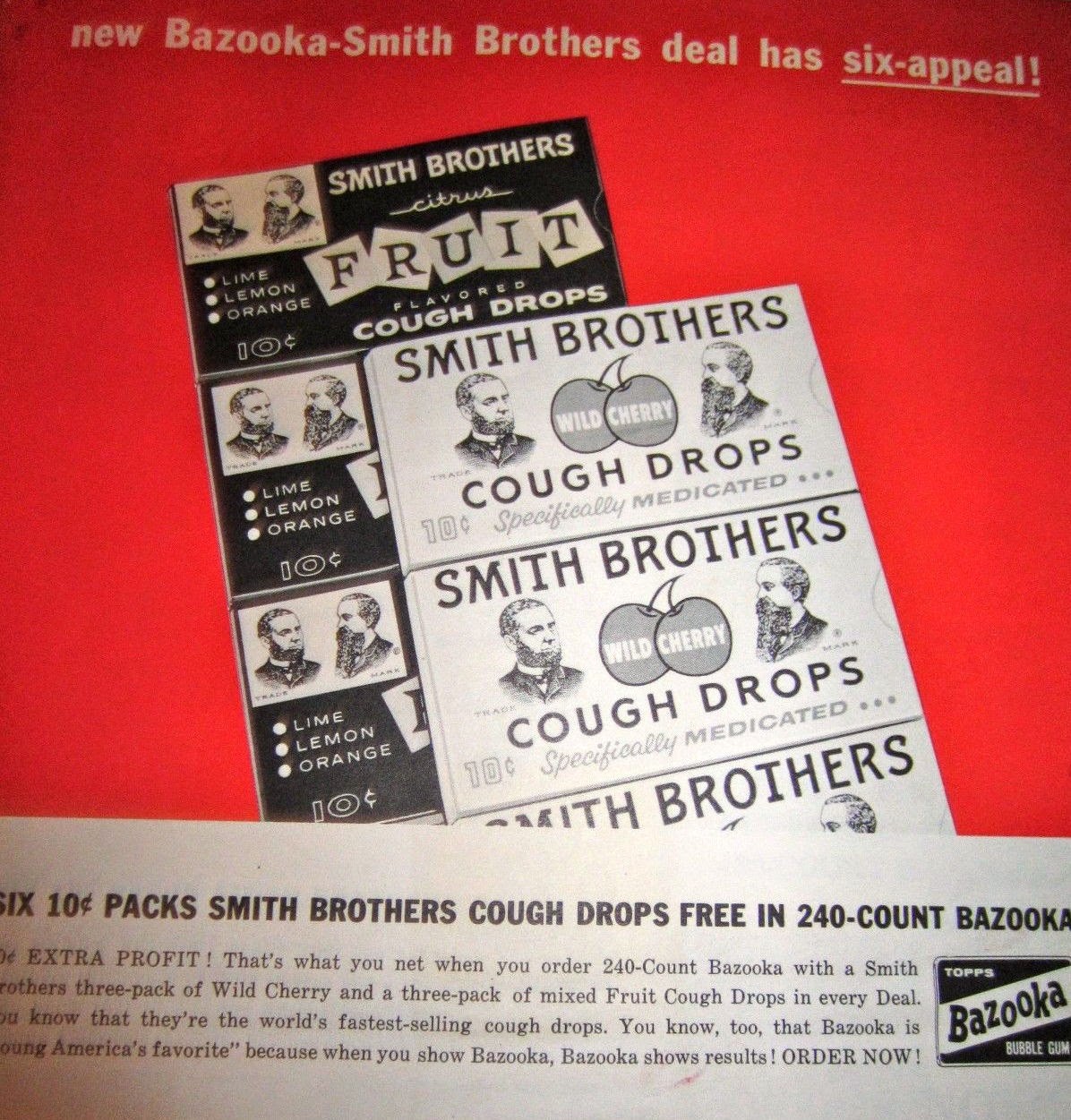 Five o'clock shadow got you down?  Bazooka to the rescue: 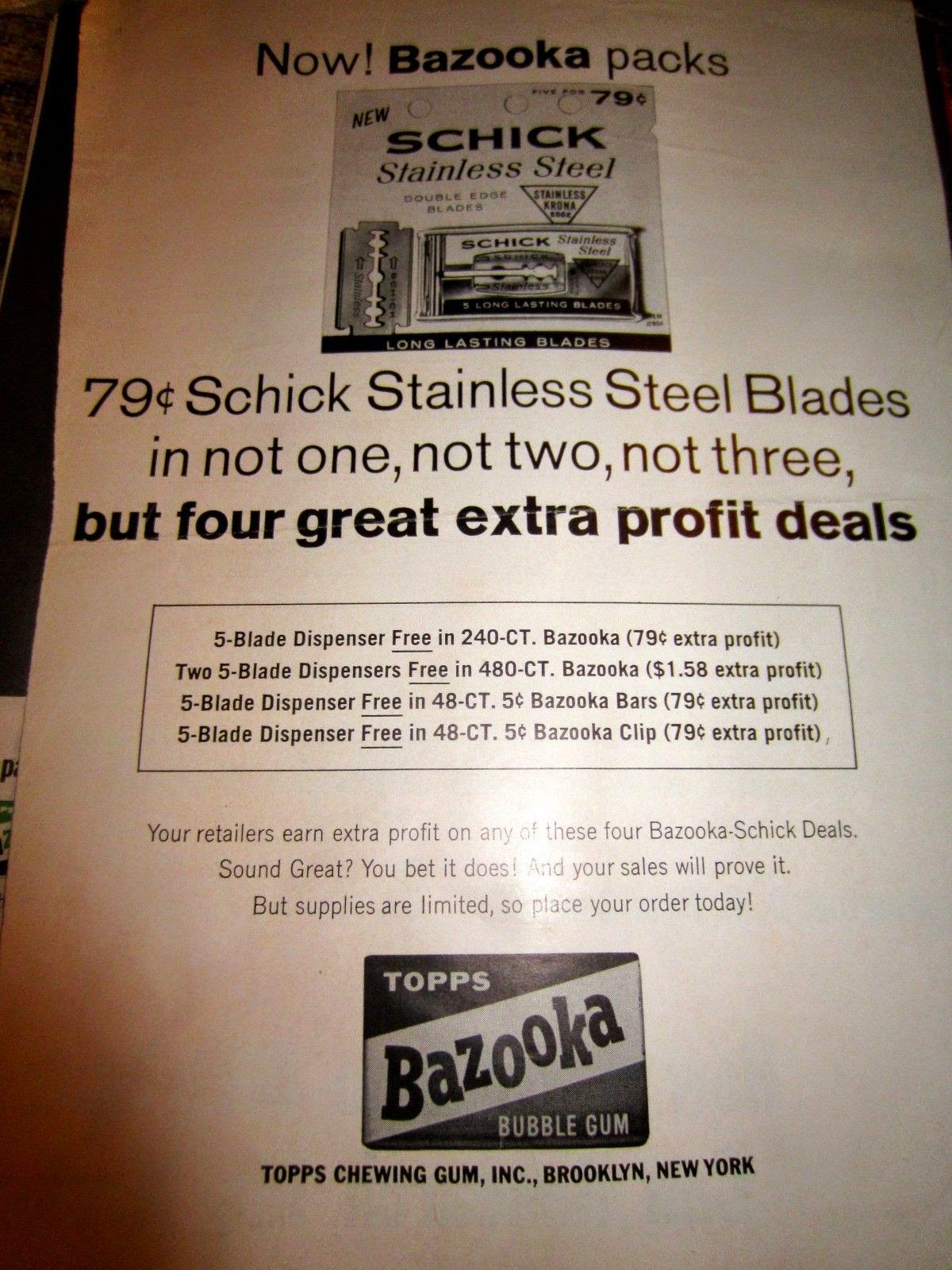 And if you cut yourself, these is relief close at hand: 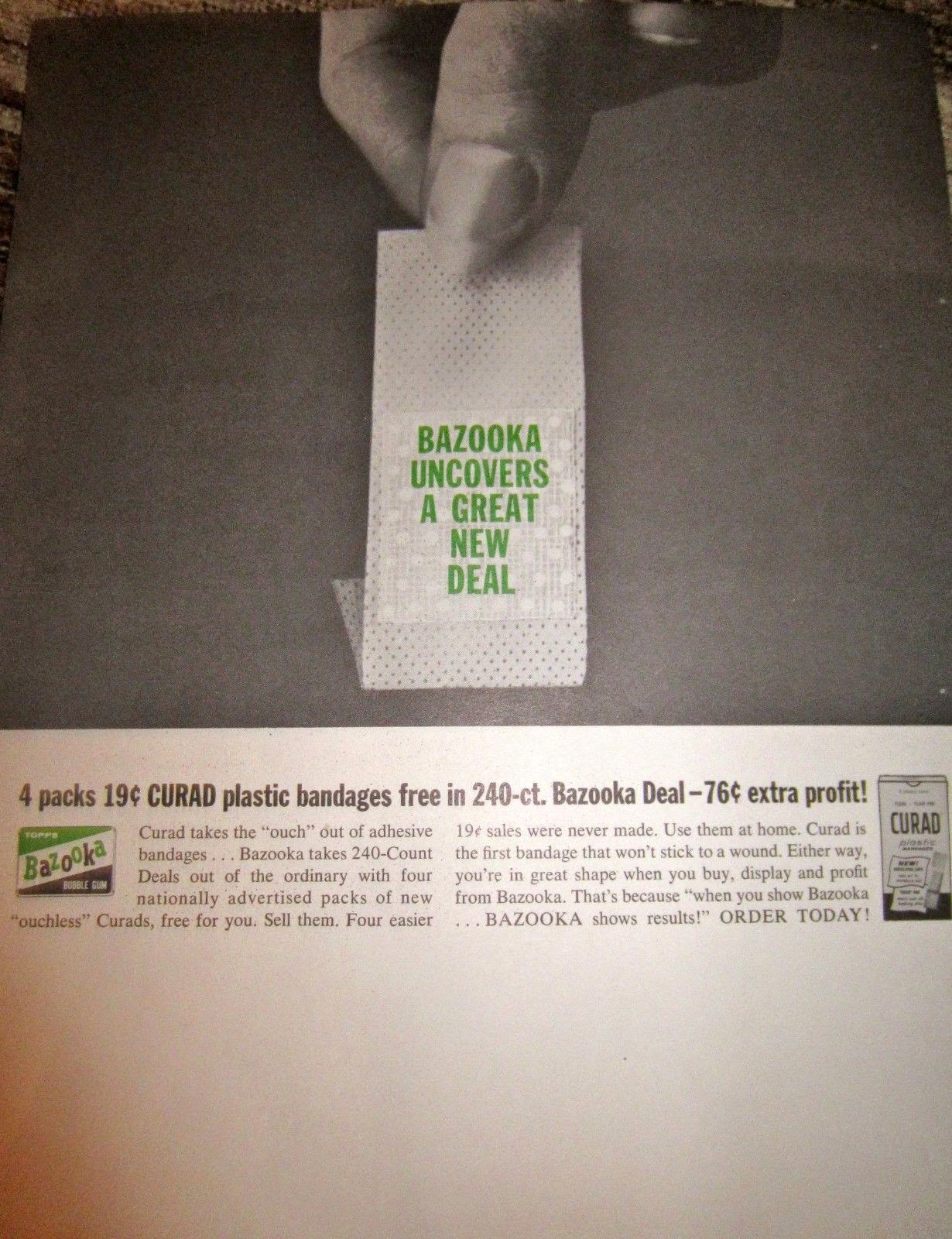 And let's not forget the pompadour: 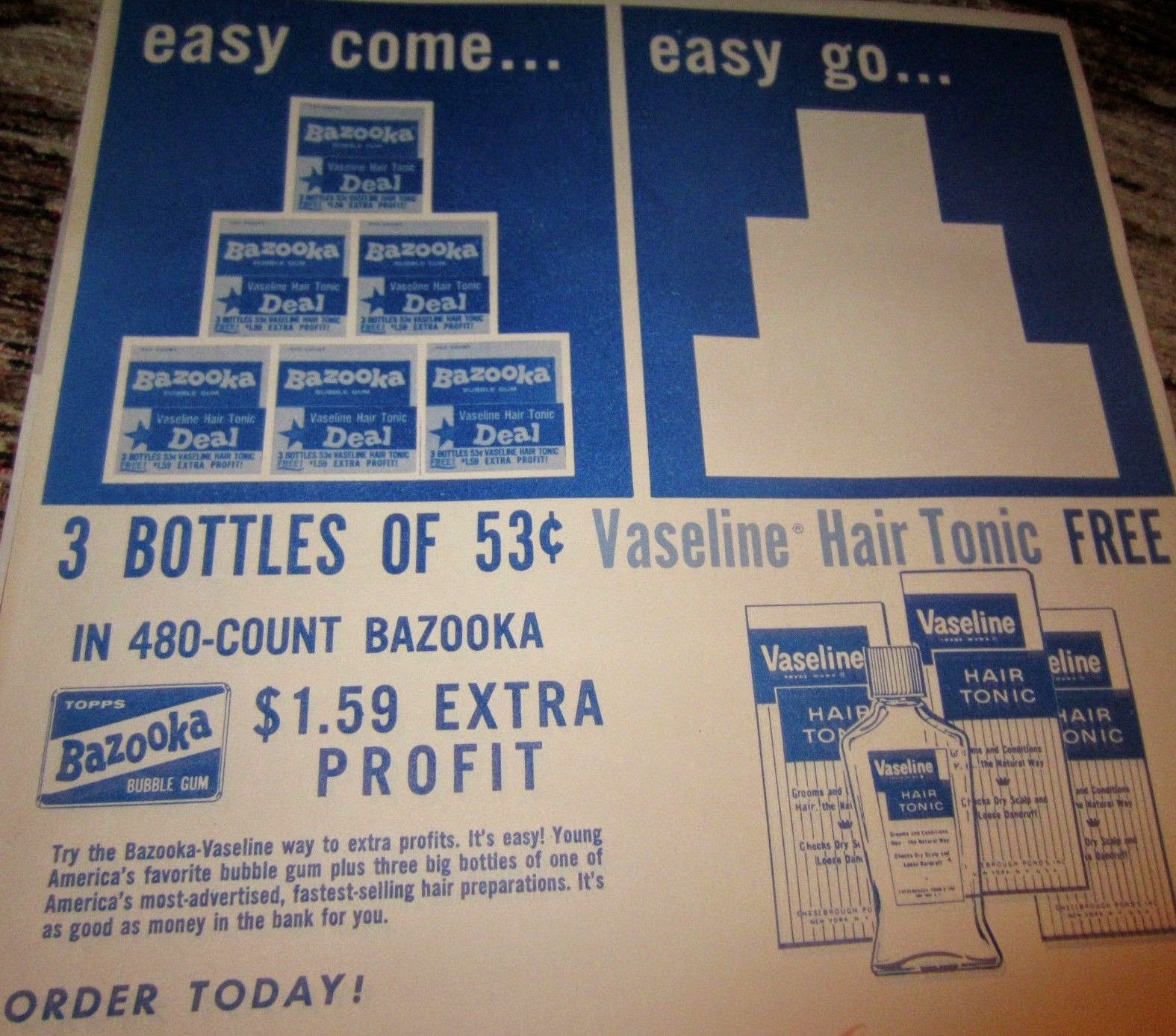 These various products seem to have had disparate owners; I was surprised when researching this post that one company did not own all these brands in 1963.
Posted by toppcat at 2:00 PM No comments:

Some sweet serendipity was at work recently as I managed to snag a series of photographic transparencies that apparently originated with Topps in the late 1950's and feature the irascible and recently deceased Don Zimmer.

The highlight of the lot was the transparency used to create his 1957 Topps card.  Here's the card, with a  typical '57 ragged cut no less: 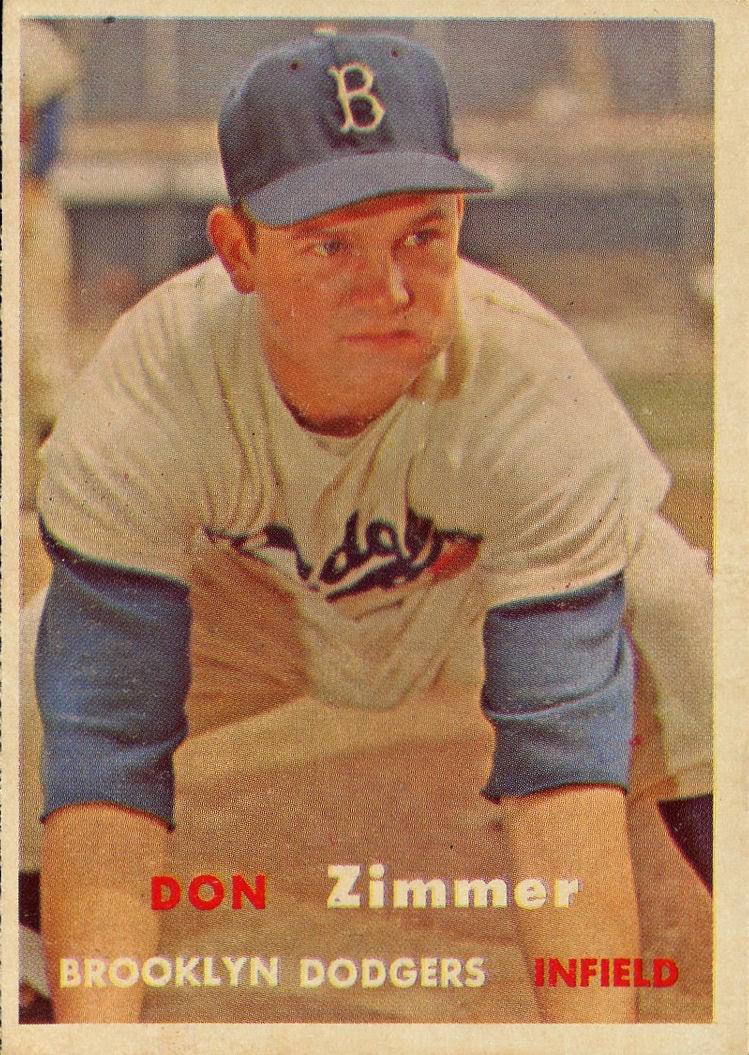 And here is the corresponding transparency: 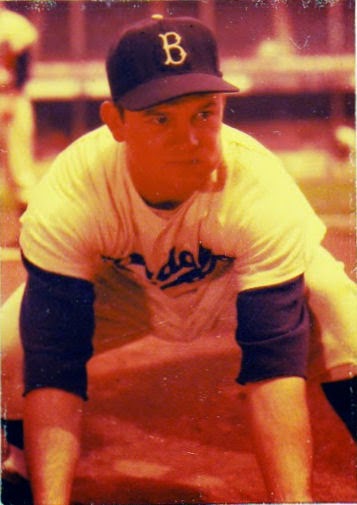 If you follow the white lines around the border you can see how the transparency was cropped for the issued card.  I assume those white lines are remnants of the production process.

The three other transparencies are also intriguing.  I can't help but feel I have seen this pose before, maybe on a Dodgers PC or something: 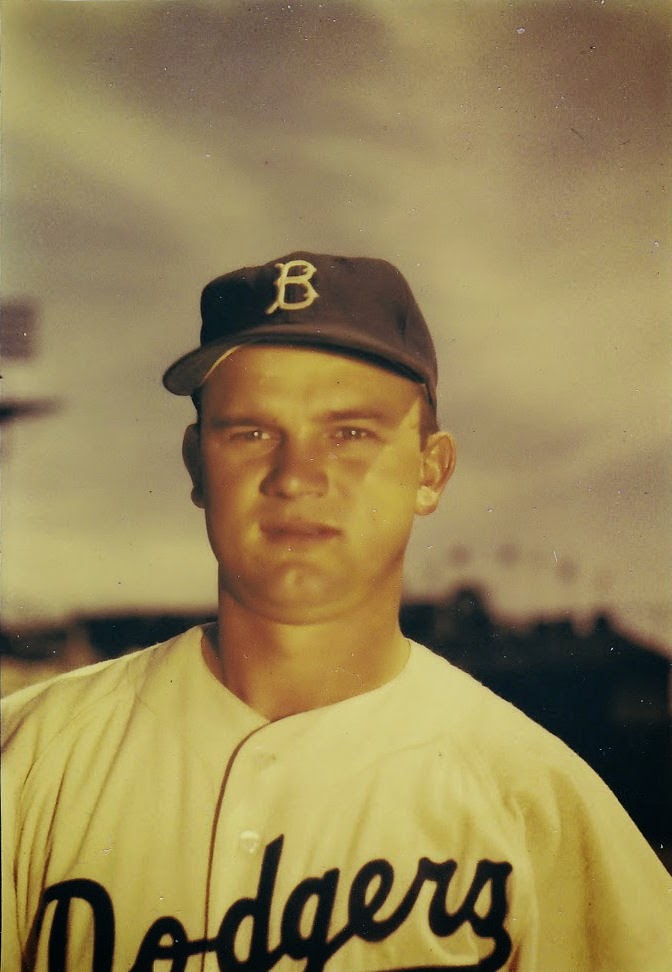 Next up is a great "action" shot: 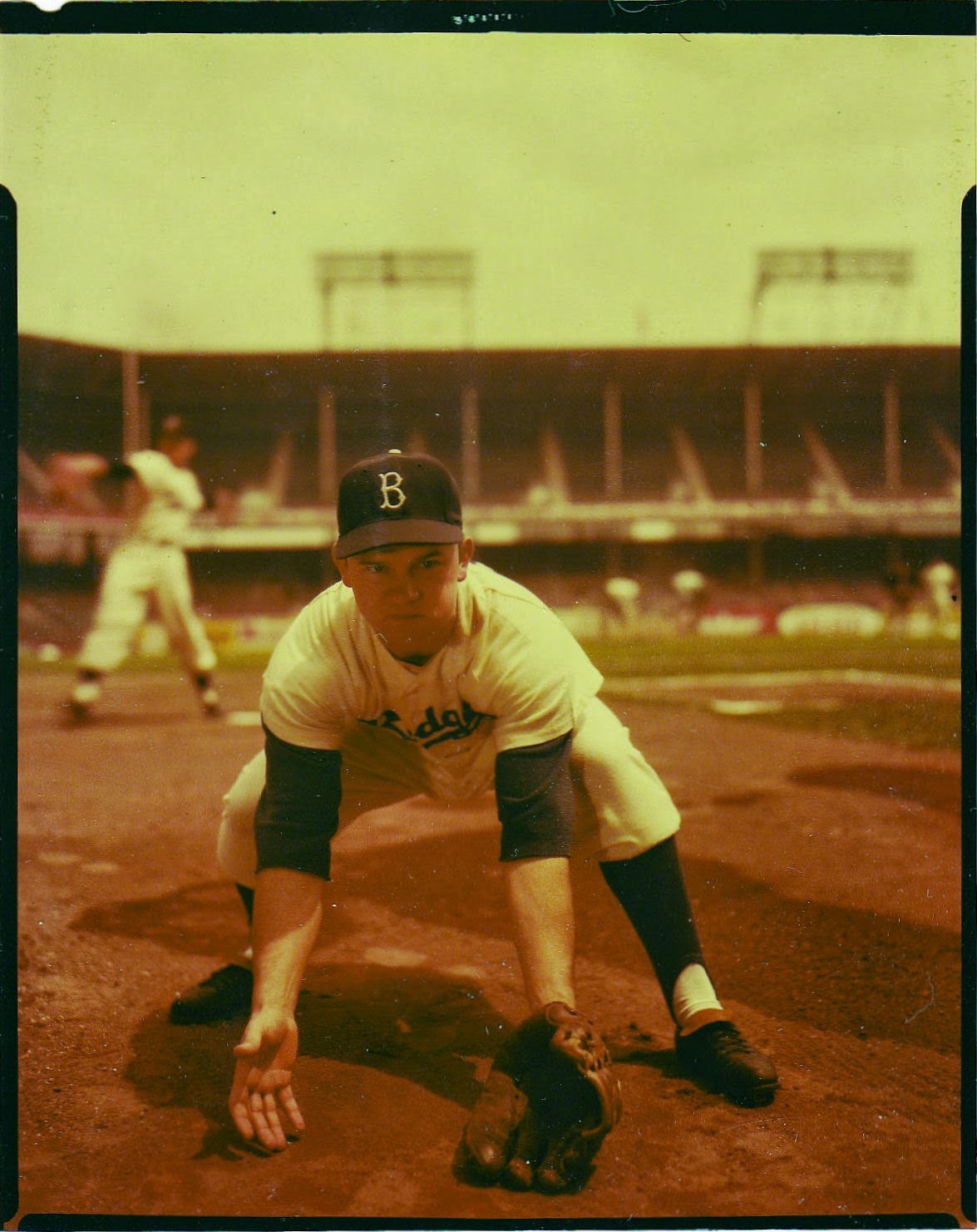 That is one fantastic Ebbets Field background, yowsa!  And last but not least,more Ebbets with a bit of a redshift: 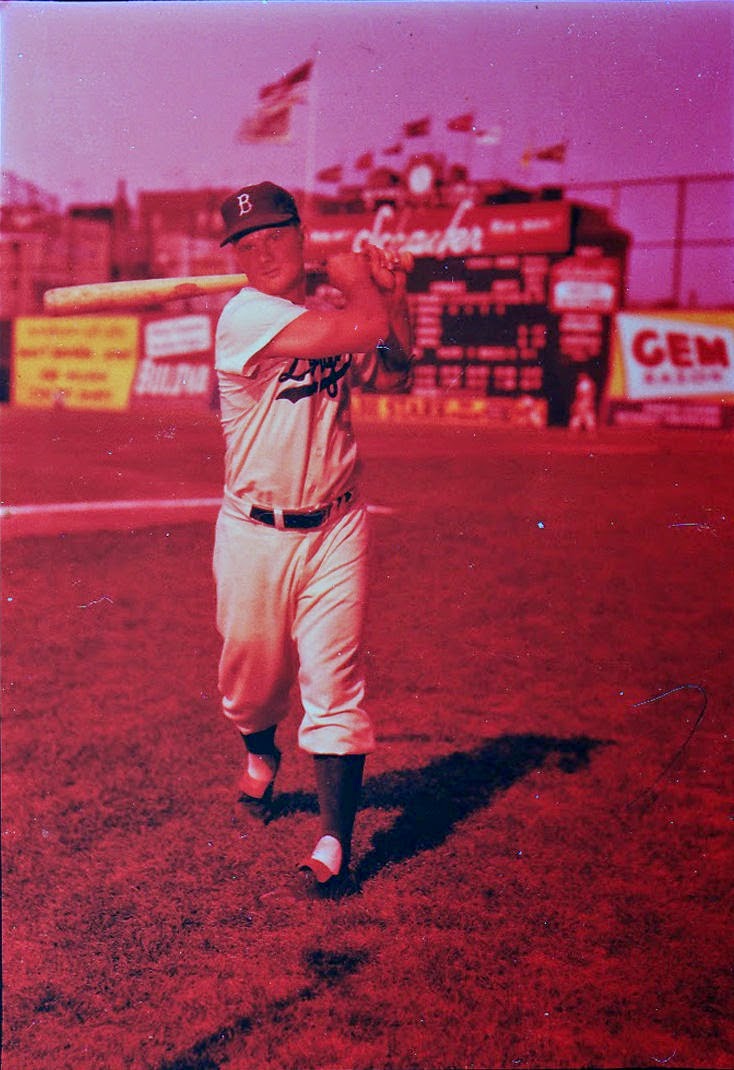 All of these exhibit some signs of hand cutting and all but the transparency used for the 1957 card have black borders from the film stock.  The sizing varies quite a bit as the production transparency is a puny 1 9/16" x 2 1/4" while other portrait, without the borders, clocks in at 2 5/16" x 3 1/4". The redshifted transparency is the same size as the portrait, sans borders, while the fielding pose with Ebbets background is a whopping 4 3/4" x 3 15/16" (roughly, as the border is protruding on the sides).

They all came in this envelope: 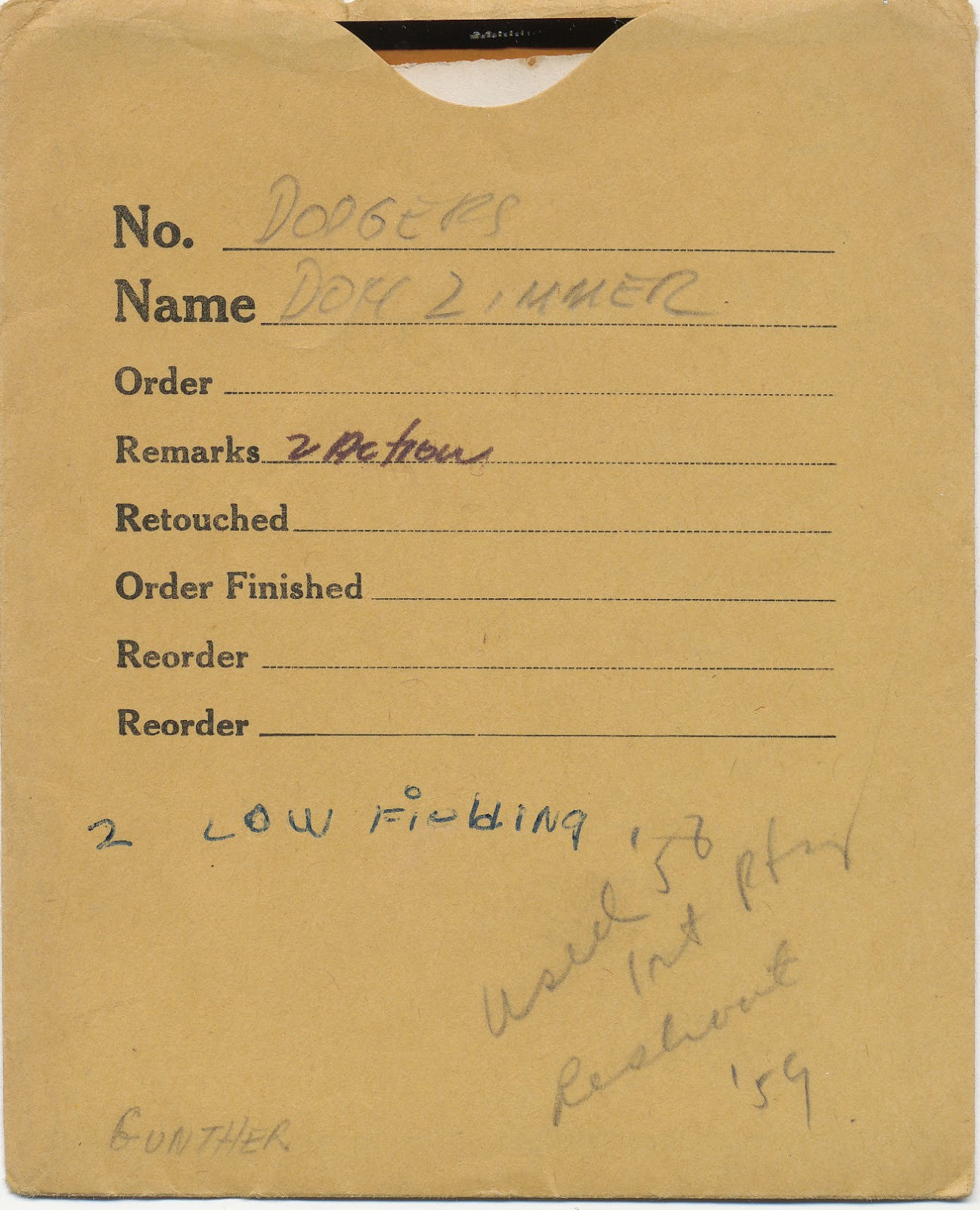 There are some bewildering notations on the envelope as there seem to three action poses but I can't swear what the original contents were while these were with Topps. Bob Lemke, from whom I won these on eBay, possessed these since the early 1980's and in fact on his blog has a few more things to say:

"The brown kraft file envelope in which the transparencies have been housed for decades has a number of penned and penciled notations. Besides his name and team there is written, "2 action" and "2 low fielding". Penciled notes read "Reshoot / '59" and "Used '58 / Int Ptg". Al least I think it says "Int Ptg". I have no idea what it means. Also penciled at the bottom-left of the envelope is "GUNTHER," which may be the name of the photographer."

Could "Int Ptg" mean interim or internal printing?  Perhaps that means it was used in a proof version or developmental phase before the LA Dodgers uniforms could be captured on film as Topps did not issue any inserts of ancillary sets in '58, which could also be what the abbreviations represents.  But really, who knows? The reshoot notation likely means newer photos were available in a different, newer envelope, deep in the vast recesses of the Topps filing system or, ahem, archives..

This is a really neat piece of Topps history and I am happy to be its caretaker for the forseeable future.