I talk a lot about uncut sheets here but never really show any. That will change today, with a short object lesson.

My fascination with uncut sheets began about 25 years ago when I reconstructed, using a grainy b&w photo from one of the numerous hobby papers at the time and my trusty Sport Americana Team Checklist, a 1967 Topps high number sheet, which had several anomalies when compared to the known list of short prints. A little while later it dawned on me that Topps had printed two sheets of high numbers, each different than the other.

What I did not realize at the time was that what I thought was a full uncut sheet of 132 (12 rows of 11 cards each) was actually a half sheet. A full Topps press sheet is actually 264 cards, divided into two halves.

Here is a fairly standard looking 132 card half sheet, from the first series in 1971: 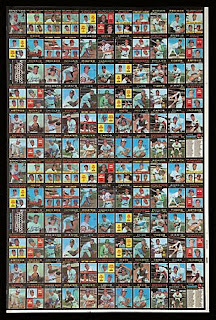 It looks a little weird due to the black borders. Now here is a full 264 card press sheet from 1964 (sorry about the duct tape), another first series beauty: 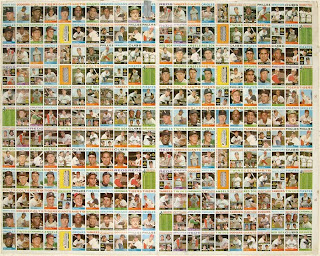 For some reason, more uncut sheets seem to survive from the first series of Topps baseball cards. I don't know why that is. You can see how the two halves would be separated into 132 card sheets. Also note the left and right sides, while containing the same cards, have different arrays. Topps would use different orders for the rows on each side. When you have a 66, 88 or 132 card series, then the different structure of each sheet would not matter (allowing for the next series checklist card "preview" usually printed with the prior series and likely the reason for so many checklist variations over the years).

However, when you had a 110 card series, you would get into "overprints", which are usually from first series sheets. An overprint is really a triple print in such circumstances. Where you had 55 and 77 card series the fun would begin as the opposite effect would take place and yield short prints.

A lot of this had to do with how Topps packaged their cards and I still do not know why those 1967 high numbers have such crazy quilt short prints, although I do have a theory which will be expanded upon here real soon.

I am fairly certain the 264 card full press sheets began in 1957, along with standard sizing. Working our way back, in 1955 and '56 a 220 card full sheet most likely was printed. In 1953 & '54 either two 100 card half sheets or 200 card full sheets were printed, I can't quite tell. In those four oversized years, the effect was the same no matter what, with planned overprints and also some intentional gaps in numbering on the sheets. The 54's have crazy holes that lead me to believe they only came out in two series. There is more on that story here.

1952 probably just had similar 100 card half sheets that almost certainly were printed in 10 x 10 format but the largest known uncut 52's are in 25 card quadrants, arrayed 5 x 5. A full uncut 1952 sheet would be quite the find!

As is stands, full 264 card uncut sheets are very difficult to find in the wild. I also have a theory many uncut baseball sheets that exist in the hobby (through 1965, when the last of Topps baseball cards were printed in Brooklyn) were either top and bottom protectors for pallets of uncut sheets where the top or bottom few sheets would bear the brunt of the metal or twine bands holding the stacks in place as they were shifted around. The sheets used for such purposes may have been rejected from earlier printings for whatever reason. These protective sheets were then discarded into the legendary Topps dumpsters, where friendly sanitation and production department workers salvaged them.

That's just my opinion, I could be wrong.
Posted by toppcat at 7:13 PM

Dave, great article, would love to see more of the uncut sheets.

This is a 1964 Topps Bazooka 10 player proof. Would like to know more about these proofs. Only seen one other Proof that anf it included Mantle.

Trying to a pic of the proof.

Sorry I don't know about the Bazooka proof.

The link works you just have to cut & paste