I thought I would continue my haphazard look at uncut Topps sheets and the 1958 printing arrays as I found this 55 card partial from the year Elvis got drafted lurking on my hard drive. There is a little bit of a tieback to the Series Preview and Checklist Relativity Theories as well!

Check out the murderer's row at the right side bottom portion of the sheet: 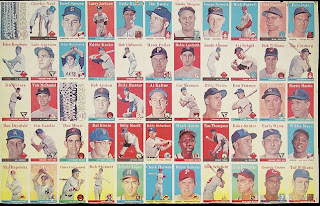 I believe Topps loaded up the first series with stars now that MLB was bi-coastal. That is not the most interesting thing about this sheet though. No, it does not have yellow letter variations either but what it does have is card #1 (Ted Willliams) and #110 (Johnny Logan) on the same partial sheet of 55. This clinches for me the fact Topps was previewing 22 cards from what they were calling the 2nd Series while printing at least 110 subjects on the first series sheet. I say "at least" but if I had a full sheet scan it would likely confirm 110 different cards.

See, here is a first series checklist from '58, courtesy of Doug Goodman: 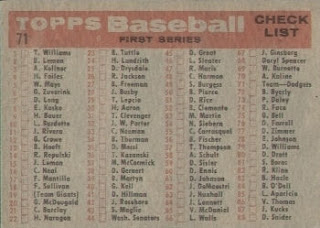 Just for fun,here is the 2nd Series Checklist (also a Goodman scan) showing the gap at #145 where Ed Bouchee should have resided: 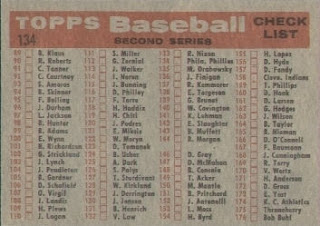 That would have been confusing as you had no idea what had happened or who it was supposed to be. If you do the math, you end up with five series of 88 printed over four sheets, ending at #440. A little teaser for the kiddies back in the day and some proof of my wacky theorems today!
Posted by toppcat at 7:17 PM