As many of you know, I consider the Topps Bonanza set to be the among the rarest of their many rare offerings and offhanded print jobs in a history littered with four figure commons and prized sets of rejected ideas that command five figures. It may even be #1 on on the rarity scale.

Rumor has it the set was created in-house as a kind of joke so I thought a look at the visual evidence was in order. Luckily there is an extant color scan of three fronts, I presume from a Topps Vault Auction:

There is the tiniest hint of red in the knot of the lariat near the lower right corner. A nice touch! Click to see more details.

The back of the card is described as being brown, although I only have a copy taken from the Non-Sports Bible, the excellent reference produced by Chris Watson: 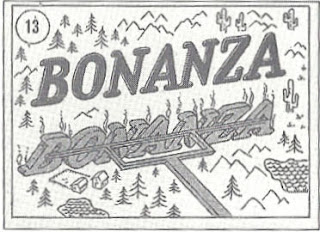 That is the back of the leftmost card in the trio #13 "Cheer Up, Hoss". In addition to the other two shown, the NSB lists two other cards: Adam Cartwright and "Private Talk".

I don't see any copyright information nor indications the cards were printed by Topps so the in-house theory looks good to me. Numbers up to 16 are known and I would not be shocked if 28 subjects exist (a common number for some of these sets). Like many other TV sets in B&W, the date of attribution is 1965, although take that with a grain of salt. Some if not all known examples have staple holes and there may only be one of each card in existence. Topps Vault auctioned off their stash and that is that, as they say. A lot of their historical information has vanished from their site so some mysteries will continue to command attention.

The Non Sports Bible can be ordered via this e-mail address: non-sportsbible@comcast.net
Posted by toppcat at 6:39 PM