Last time out (yesterday, actually) we explored the world of Bowman's salesman's sample strips and promised a peek at Topps own strip show. Well we're off!

Topps had salesman's sample strips produced for the 1952 baseball cards and so predated Bowman by at least two years. I am not aware of any earlier strips but it is possible they could have produced some, especially for 1951; maybe one will show up someday. The 52 strips look exactly as you would expect:

Those are numbered: #41, 42 and 43 which fits the known pattern of how Topps consecutively printed the 52's, row by row. The back touts the Giant Size theme that was starting "Taps" for Bowman.

Boy a box of those would be sweet!

The '53 strip adorning the header of this blog is not a sample, merely a remnant. No scan as of yet (I will do a catch up thread when I get ahold of scans for all the missing years).

There is a nice sea of white on this one from'54:

The back is getting to look like the "classic" samples, which have one facsimile back and some advertising but this one is transitional. Check out the truncated reverse of the middle card and note the flip flop, which is odd given that doubled rows of similar colors were how the 54's were arrayed.

By the way, the backs on the samples often did not match the card fronts. Sometimes a random back was used repeatedly.

Nice but the real eye-opener is on the back:

Yes, that is a 1955 Doubleheader card affixed! Here, we have a better orientation and an opened DH: 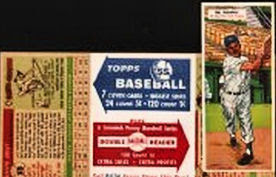 You can see the ad mentions the Double Headers in this blow up:

I guess calling the DH's a gimmick seemed like a good idea at the time! It seems like there is no hope of ever finding a 5 cent Doubleheaders pack; they appear to be solely a penny item to be sold alongside the regular issue.

The strip is horizontal but the back is vertical:

That is the "classic" look I referred to earlier. I can't quite make out the middle part as the scan is blurry but the middle would be used to good effect shortly.

No 58's either today I am afraid but we can close out the decade with a '59 strip:

Aside from having the fabulously monikered Gene Green on a pink card (?!), the back adds a new wrinkle:

That is the address of a grocery wholesale in Chicago added to the mix in the middle. I suspect Topps started personalizing samples for their wholesalers to hand out as order reminders while having their own samples going to the wholesaler (or jobber if my understanding of the nomenclature is correct). I think the 1959 sample is really sharp and like how the card back is so green. The premium offer reference is just icing on the cake.

Look for a look at the 1960's samples next time. Thanks to Anthony Nex (again) and Don Johnson (1959 collector supreme) for all the great scans!
Posted by toppcat at 5:56 PM