Generally speaking, if I own something discussed here I will use my own pictures or scans. Many times various Friends o'the Archive send along fabulous scans of cards and related pieces, many quite rare that I will use. Ebay is very useful for pictures of things I do not yet own or am not bidding on for various reasons. However, I just won an item that is too big for my scanner so I will have to use some pictures from the 'Bay, except from a different auction!

What is this gargantuan construct that has vexed me so? Why a Topps Hobby Card Album!

The album is designed to hold 208 cards standard sized cards. The cover will remind you of some earlier wrappings and trapping for the Trading Card Guild, so these must have been bouncing around the premium fulfillment warehouse for a good long time (more on this in a minute). The Topps shield logo is practically aboriginal. Here is the cover: 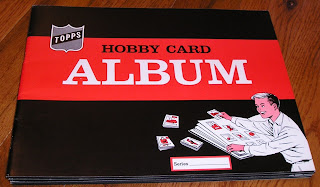 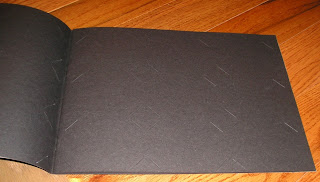 There was a handy do-it-yourself checklist on the inside back cover: 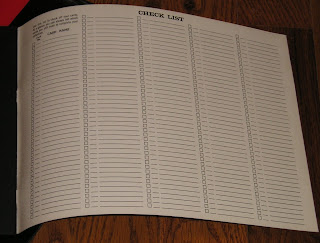 And some history and instructions on using the album and checklist on the inside front: 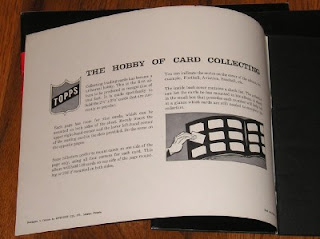 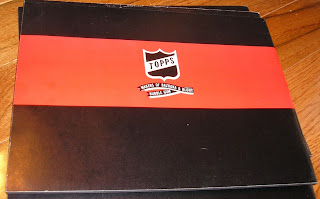 Blony is listed along with Bazooka and the inside cover also mentions the "2 1/2" x 3 1/2" cards that are currently so popular" giving us a date no earlier than 1957 for the album's first appearance. The Ebay auctions refer to this as a 1967 issue; I am not sure when the supply was finally exhausted but Blony was discontinued in the early 1960's. It is plausible Topps sent out the albums after Blony died out until no more were left.

I have a comprehensive list of the baseball wrapper side panel ads for this period and the album does not appear on nay of them. I have to believe it was offered on Bazooka comics and maybe on some non-baseball wrappers since clearly it was a by-request item. The album was certainly a mail in offer and four of them were apparently housed in this envelope from a Bazooka premium fulfillment warehouse: 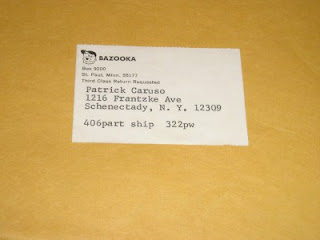 Topps certainly did a lot to promote the growth of the hobby itself back in the day. I am also aware of some generic knockoff albums from around 1965 so there was some competition in the field.
Posted by toppcat at 7:15 PM

Great post. Ive been collecting for 30 years and have never seen this.