Not So Fast, Eddie

Well campers, your humble blogger has returned from The National and a week's r&r refreshed and ready to go.  The National, which will unfortunately not return to Baltimore any time soon, featured a somewhat underwhelming array of test issues and the like this time around, reflecting last decade's trend of choice items going to catalog auction houses. I had previously been alerted to one such item, a purported 1951 Major League All Star card of Eddie Stanky that came from his estate and was chuffed to go see it at the Mile High Card Co. booth.

This is the card in question:

The reverse is bare cardboard:

It's quite clear the perforations do not show on the back, so those little black lines are copied as well. For comparison, here is a vintage Stanky MLAS, one of the rarest Topps card in existence: 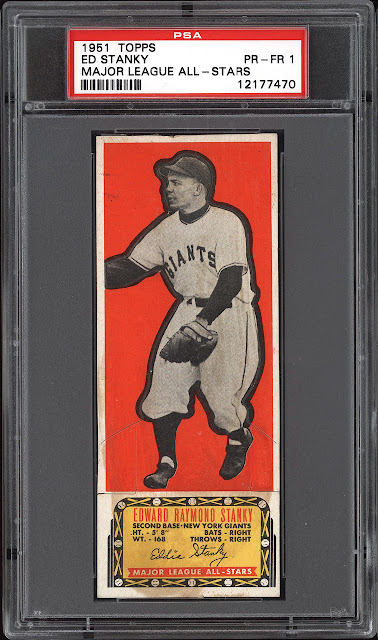 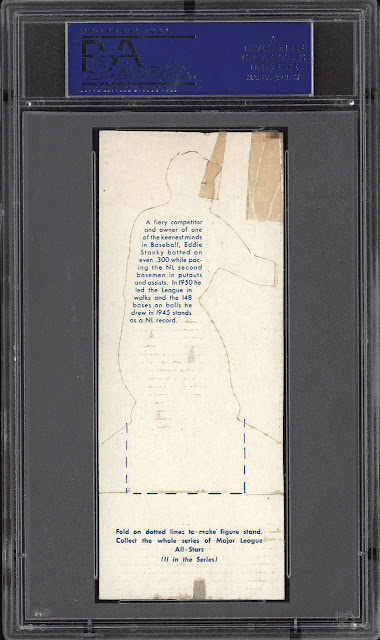 Mile High contacted me about two months ago about the top card and advised it was found with Eddie Stanky's personal effects, along with a number of other cards which I will leave for Mile High to advertise as there were some significant pre-war cards found.

I was not able to turn anything up on the Stanky. You can see it is hand cut and upon further inspection it is revealed to be a copy of the original card.  All of this was known before the National and I want to stress no one at Mile High was representing the card as an original.  Mile High was trying to determine if the card was a copy made by Topps.  At the National, I was able to view the card,  although not with the aid of magnification, which would have been helpful as I was told it was found to exhibit a dot pattern and not the moire pattern more properly associated with 1951 printing technology.

However, this does not answer the original question as to whether the card was produced, as a copy, by Topps at a later date.  There are a few more clues out there though, namely at this 1951 Bowman site: http://www.1951bowmanbaseballcards.com/1951ToppsMajorLeagueAllStarsPage.htm that lead me to believe it was not. I may or may not get into why in a later post but just take a close look at the short prints.

You can see a Roberts similar to the Stanky is shown there plus a Konstanty with two colors of print on the reverse.  I don't think those are originals but that part of the site is just a gallery page showing all 11 MLAS cards and doubt the webmaster there was concerned with questions of provenance.

I'd be interested if anyone out there has any more insight on this situation.
Posted by toppcat at 12:03 PM