I have been keeping track of all the various Topps issues from their first sets of cards in 1948 through 1980 (the last year of the old curved, lower-case Topps logo and also the final year before the Fleer and Donruss baseball hysteria ensued) and would say on average I add a new set to the database maybe once a year these days.  So it was quite strange to find two new additions in the same week.

Now it may be that I just missed these sets the first time they were discovered as I have found that many eBay sellers don't bother to identify what year their wares first became known in the hobby but I am not seeing either one listed in any known guides.  I'll be a tease and put one set off for next time as it's a bit of a lengthy story compared to the bad boy I want to discuss today.

There are some eBay auctions being run over the past month or so with a set that is unnamed but which I have dubbed Funny Flash Cards. Only a handful of cards have been auctioned (none successfully) and there are, maddeningly, no scans of the obverses.  Here is one: 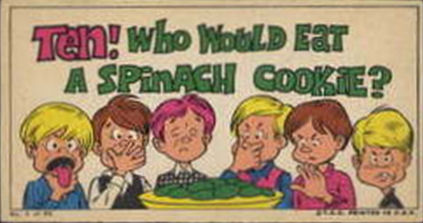 The artwork pegs it around 1968 to my eye and you can see the reverse answers a question on the front, hence my nomenclature.  It's hard to see but that bottom left indicia indicates 55 cards in the set.  There are some historical themes: 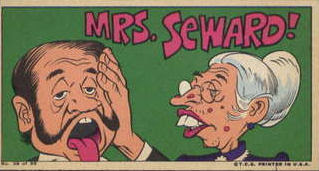 As well as riddles, although this could be math-themed: 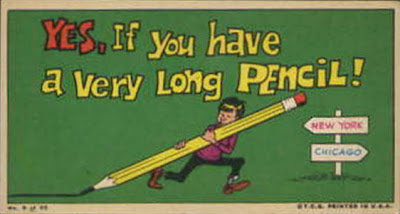 I would love to get some front scans.

Were these rejected test sets?  Am I missing something glaringly obvious?  I ran some scans by Friend o'the Archive Bill Christensen and he had not seen them before and he's seen a lot of obscure stuff!  Anyone out there know?
Posted by toppcat at 7:13 PM

I swear I've seen these before and I even want to say they are in the Benjamin guide, but I won't swear to it. I'll do some looking and see if I can find something or at least the set name.

I know, they do seem quite familiar.