Still cleaning up the hard drive kids and still finding treasure.  One of the enduring words in the printing business is "artwork", which these days 99.9% of the time means "Photoshop". However, back in the days before digital, artwork meant exactly what it implied.  If you wanted to print a baseball card, you needed to have the "mechanical artwork" ready and in most cases this involved the work of a few different folks, namely the artist who created the work to be reproduced and the paste-up artist who got it ready to print.

We have seen the 1953 artwork used by Topps to create that set of baseball cards here previously but the landmark 1952 set also used artwork extensively, especially so in the first three or four series.  Here is a 95% complete pasteup of card #130 in 1952, depicting Sheldon "Available" Jones: 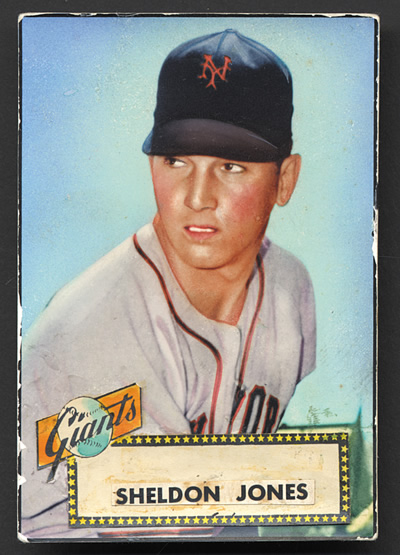 You can clearly see the buildup of the various layers (and evidence of rubber cement) from the bottom up, even the black neatline is there.  You have the photo (heavily Flexichromed) which then has the name box with stars added on top, although I can't quite tell if the layer of stars was added first and had a large, black interior section.  In turn, the nameplate (which ahs slipped) and team logo have been built up on top of that.  The border of stars looks like it was added in small strips of six or seven stars as well.  I never noticed it before but the top and bottom borders of stars are aligned :"straight up" while the left and right border's twinklers are off set and even more impressively, oriented left and right depending upon which side they were placed.

The facsimile autograph is missing and looks like it may have fallen off sometime in the last 60 years. I'm certain this artwork would have been pasted up by the art agency of Solomon & Gelman. 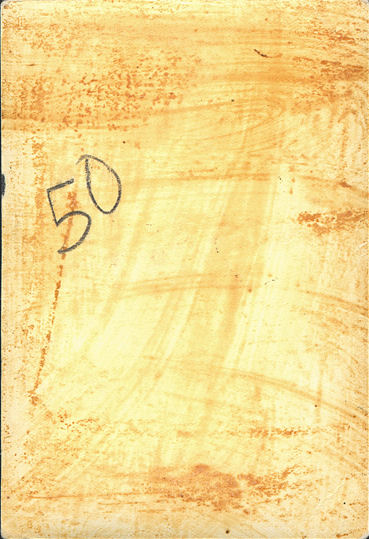 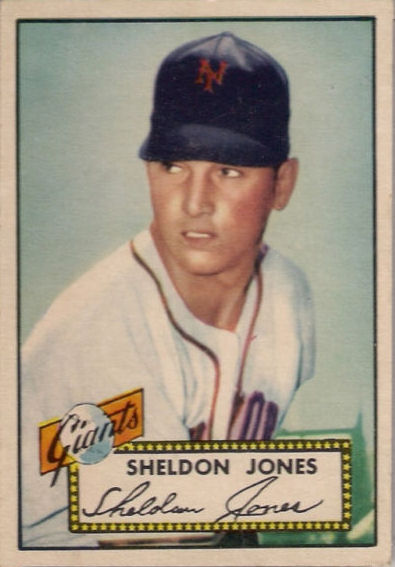 The nameplate obscures much of the detail in the background at the bottom.  The original photo, which looks to have been widely circulated, has some great stuff going on behind Jones and was also the basis for his 1948 Bowman card.  Here is the photo, from Wikipedia: 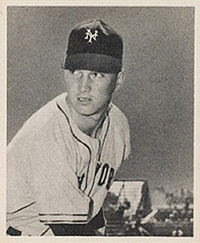 
Actually, I'm not so sure that isn't his 1948 Bowman card shown there. 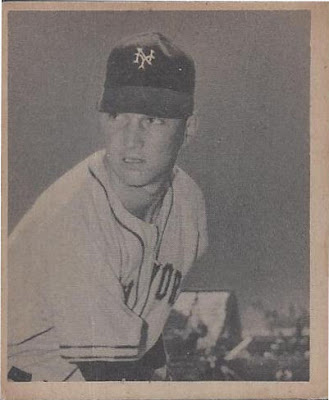 I think Topps either added some detail to the background or the knife slipped when the mask for the black process was created -check out the way the top of the grandstand looks in the Topps card vs. the view above:

It's clearly the same shot (look at the sunlight reflecting in the bottom right as well as the way his uniform is draped) but there's a little spire at the top right of the taller stand (Braves Field?) on the Topps version.

By the way, Jones got his nickname since he was always available to pitch, either starting or in relief. He was traded to the Boston Braves on April 8, 1952 so Topps must have finished the artwork for his card before that date, probably in very late March.

I really enjoy your looks back at the making of these classic sets, thanks for your work on these!