Sixty years ago a 3-D craze was weeping the nation.  Movies, mostly of the "B" (or lower) variety were manipulated to allow patrons to watch with special glasses to give a feeling of depth, while the occasional surprise, such as a snake suddenly rearing forth into the audience's field of vision, would make everybody jump. Topps took advantage of this pop culture fad by releasing a set in 1953 called Tarzan & The She Devil.

The glasses were quite tiny:

Based upon the movie of the same name, the card fronts in this 60 card set were not viewable unless you had a pair of 3-D glasses: 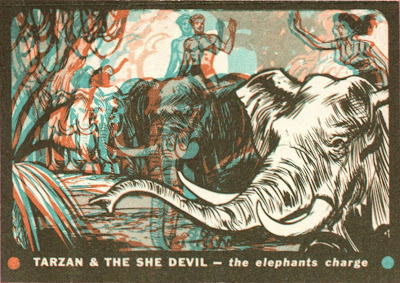 While not a high demand set, finding cards in top shape is tough due to full belled borders on the front and the back: 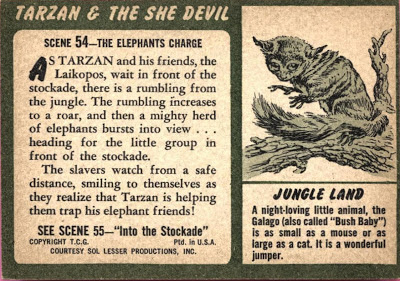 Intriguingly, Legendary Auctions just had a lot with the original artwork for this card and it's quite impressive: 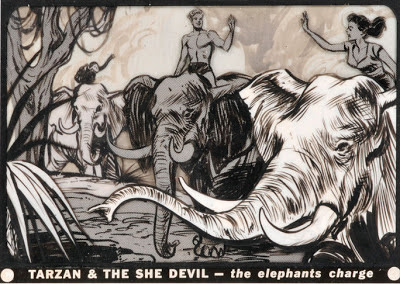 Take a look at the delicate wash-work in the background!

It took four layers, created as acetate overlays, to build up the card image before it could go into production.   You can see the depth this added quite easily. Topps enlisted Joe Kubert, the now famous comic book artist, recently deceased, to construct the set.  Kubert was involved with the first 3-D comic book as well and certainly would have been known to Ben Solomon and Woody Gelman, whose art  firm acted as intermediary for the set, despite their both being Topps employees at the time. Kubert was still dabbling in 3-D art as late as 2011, a year before his death.

Another set, called Tarzan's Savage Fury, came out after this one and did not sell  as well.  The format was exactly the same, Topps just changed the colors of the cards a little.  A tealish green on the front: 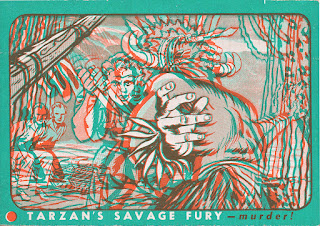 Orange on the back: 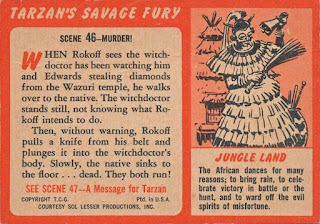 An alternate set of glasses is out there, almost certainly an O-Pee-Chee product.  Look how the font is different and the country of manufacture is shown:

There have been finds of these cards, especially in penny packs.  Glasses came one per nickel pack; I believe they were also packed loose in the one cent boxes.  Tarzan means "white skin" by the way.
Posted by toppcat at 8:30 PM

Email ThisBlogThis!Share to TwitterShare to FacebookShare to Pinterest
Labels: 1953 Topps Tarzan And The She Devil, Ben Solomon, Woody Gelman