It looks like we have another entrant or two in the list of firms that printed cards for Topps back in the 1960's.  In re-reading one of Keith Olbermann's Sports Collectors Digest posts about the 1967 Roger Maris Yankees card, I happened to notice a comment about some uncut proof sheets made up by a printer in Connecticut. I did a double take as I had missed this information the last time I had read Keith's article, which came out in 2008.

The Olbermann story is thus: a house being remodeled in Connecticut is found to have sheets of old cards being used as insulation in a false ceiling; in addition aluminum printer plates from some Topps sets were found in the void space as well; 1962 being the "year-zero" for aluminum Topps plates, this piqued my interest even more. It would turn out the previous owner had worked for a company that printed cards for Topps.

I still need to do a deep dive into the printing of 1962 Baseball Green Tints but there is a great article by Pete Putman that appeared on the PSA website a while back that delivers an in depth look you should go an check out. Pete mentions within his article the Rochester firm of Stecher-Traung, which I believe did overflow work for Topps in the early 1960's after Zabel Brothers of Philadelphia took over for Lord Baltimore Press (LPB). LBP was bought out by International Paper in 1958 and slowly transitioned out of commercial printing thereafter resulting in Topps utilizing Zabel Brothers, which had produced some of the best Bowman sets, as their main printers for decades (this comes straight from Irv Lerner, who used to do Zabel's tax work).

Stecher-Traung likely printed the green tint second series baseball cards in 1962 but this has not been definitively proven.  Pete also mentions they may have printed some 1952 Baseball high numbers, at least the ones that ended up in Canada and that theory makes a whole lot of sense to me. Anyway poking around after re-reading the KO piece, I stumbled upon a very, very interesting auction on eBay that concluded last month and has shed some additional light on this Connecticut firm, although a name has not yet presented itself.  What has presented itself is intriguing, namely a bootleg 1966 Batman Black Bat series Cinderella card featuring the Caped Crusader on the commode:

It's a little blurry obviously but I suspect that was a Norm Saunders creation: 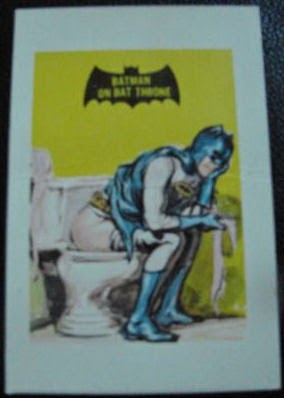 The back has some bleed through: 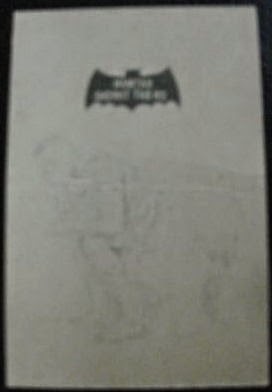 This creation, along with some cut up proof cards from the 1966 Batman Bat Laffs series were found together and originated with the family of an employee of the Connecticut firm.  Now get this, the family member's relative auctioning off this piece is domiciled in, you guessed it, Rochester, NY!

Stecher-Traung did have a corporate presence in Connecticut but I can't decipher if that was before their merger with Schmidt Lithographic of San Francisco (likely printer of Obaks) or after (merger was March 1, 1966) so there is more work to do. But there is no way the Rochester connection is meaningless or random.

Now, for a bigger issue.  It has long been suspected within the hobby that numerous test issues produced for Topps in the 1960's and 70's were specifically printed for sale via the Card Collectors Company and/or Bill Haber (long time Topps employee and early card dealer).  There are numerous black & white test issues from the mid 1960's that I have long felt were not produced by Zabel Brothers so I wonder if our mysterious Connecticut firm had a hand.

It gets even better-I have found some old news stories online suggesting another Baltimore firm also did some work for Topps, one A. Hoen & Company. Whether they did some overflow in the 1950's or other work is an open question but one I hope to answer as they were in business from before the Civil War until 1981.  That is a tantalizing thread to follow as it has been offered up by other writers and researchers that the 1967-68 Topps Action All Star Stickers saw limited distribution in the Chesapeake Bay area.

And we get into even another possible connection or two, namely a Grand Rapids, Michigan subsidiary of Stecher-Traung Schmidt called Wheeler-Van Label Company.  Let's not forget Michigan was a main distribution area for the 1975 Topps Mini Baseball cards, as was California (Schmidt's original base). So how many wheels-within-wheels are we dealing with? More to come...
Posted by toppcat at 8:00 AM

I had more than enough PayPal buyer credit to snag the "Black Bat" uncertainty but hesitated: Holy Joseph Addison!