Fighter Planes were issued twice, once in 5 cent packaging, with their Brooklyn address and once in 10 cent livery, using the Duryea address (according to Chris Benjamin). Topps was listed as a distributor as the planes were made in Japan (although I suspect the wrappers were produced in the U.S.) and the product contained no gum. I had originally thought the five cent version was an early 1960's issue based upon the artwork on the wrapper (which was an envelope) but the first item on the checklist:

I've shown those previously and they are courtesy of Howard Schenker. The set of 24 seems to consist mainly of a mix of World War 2 and Korean War fighter jets and newer planes introduced in the 1960's. If you look at the checklist carefully you will see the first plane listed is the F-111. This would be the "Aardvark", manufactured by General Dynamics and introduced in 1967.   Given the F-111's debut date, the set could not have been issued any earlier than 1967, which is my best guess as to a date right now. I suspect the Fighter Planes were issued after Marvel Flyers (which had a ten cent price point at a time when Topps was firmly entrenched with five cent packaging, maybe due to the costs of licensing) but before Flying Things (ten cents on all packaging for the first four series). In any event, Topps mostly dropped five cent pricing in 1969 (Stickers and Tattoos being the most common exceptions) so there is really a three year window in which they could have been distributed. Other companies offered similar styrofoam planes and indeed they were popular boys birthday party favors back in the day.

The ten cent version, which uses the same artwork but for which I do not have a back scan, alas, was given a 12 subject checklist by Chris Benjamin in his 4th guide and he seemed pretty decisive on the matter, so I assume he had seen the reverse of this particular wrapper.  For the record, he lists:

Topps reissued certain Flying Things series in similarly cut down fashion as time progressed, going from a high of 24 planes to a low of 6 by 1975. I'm not sure what year the ten cent version was issued though, maybe between the 1970-71 and 1975 Flying Things would be my guess but a product code would seal it.

Here is a nice flattened box, courtesy of REA: 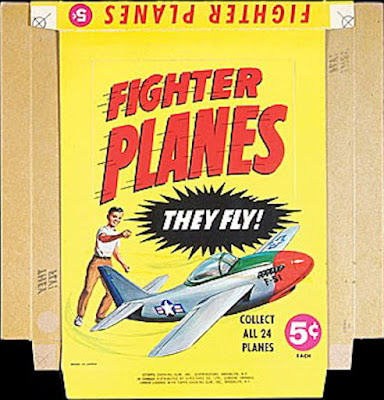 As well as a proof of the wrapper/envelope: 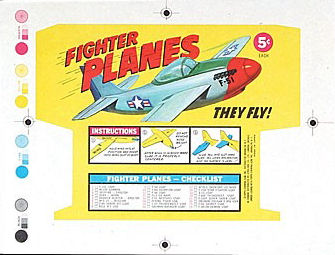 Not to mention some proofs of the planes proper: 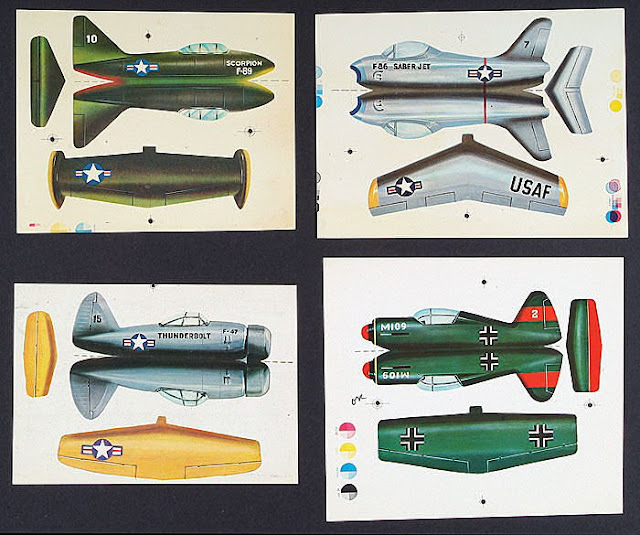 It's a neat set and a bit hard to find compared to Flying Things and Marvel Flyers.
Posted by toppcat at 8:00 AM