Topps had all sorts of creative ways to save money in the golden olden days, from repackaging unsold product and reselling it to having the Card Collectors Company sell overstock and returns that even the most wonderfully designed repackaging couldn't move. Topps even continued to use up stationery items with old logos and x'ing out information on their letterhead.  But one of their best ideas in this vein involved letting their athletes under contract select merchandise from a catalog instead of getting a check each time they signed or renewed.

After Sy Berger was hired in 1947 he used connections he had from his Army days to start procuring cheap trinkets for the Bazooka premiums Topps would unceasingly offer on their comics. Topps took that practice and just extended it to the athletes that comprised their sports offerings. Originally just offered to baseball players, likely beginning in 1957 (more on that in a New York minute), the process would become quite robust in later years. Thanks to a recent spin through eBay, I can give you a peek at how it all worked.

Here is the 1973/74 Gift Catalog that Topps gave to all their subjects: 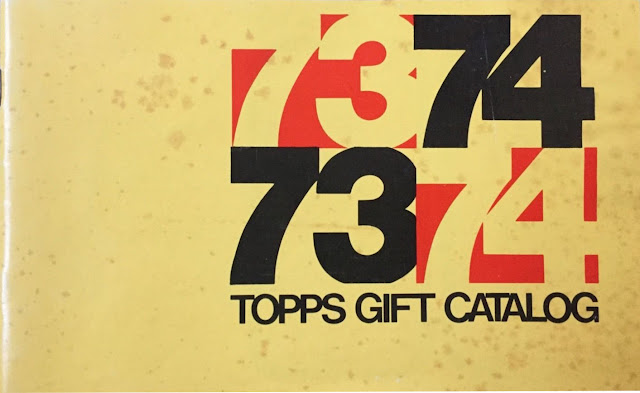 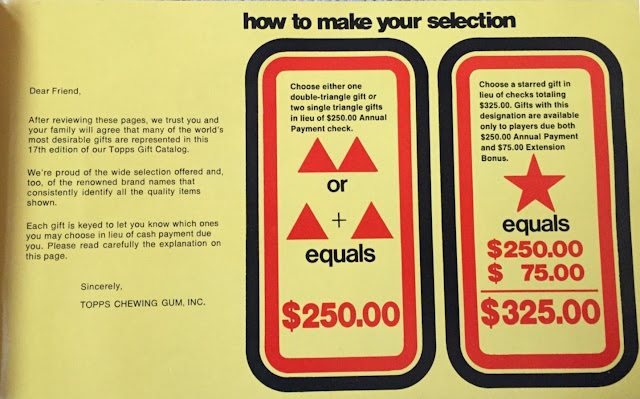 The dating of this one (by the way, nice graphics!) and the fact this was the 17th edition allowed me to guesstimate the first year of the catalog. Counting backwards you get 1957/58 as a starting point, a date which makes a lot of sense. In their earliest years of signing ballplayers to contracts (beginning in 1950) cash was king. Things must have changed with the assimilation of Bowman. Since Topps purchased their main competitor from Connelly Containers in early 1956 it would have taken them a little time to get the first catalog going. Topps was producing football cards by this time (and would dabble with basketball before relaunching hockey) but the first two or three years of football were procured by a deal with the league and not the individual players. I suspect it was the same with the NBA (and NHL two years prior).

As a bonus we also get a glimpse of the payments athletes could expect in 1973: $250 when they signed and an extra $75 as an "extension bonus", which must have functioned like the soon-to-be obsolete reserve clause in Major League Baseball contracts.

Some of the offered merchandise is a hoot: 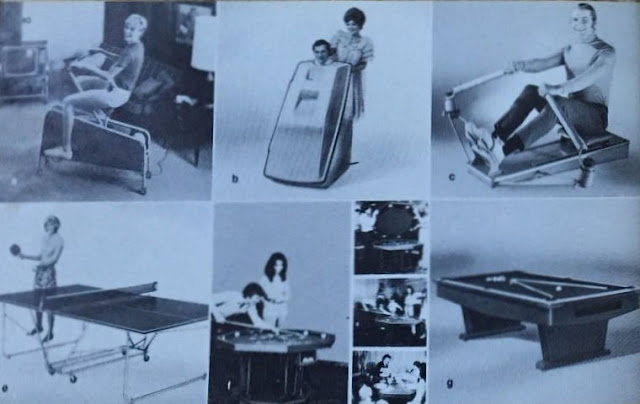 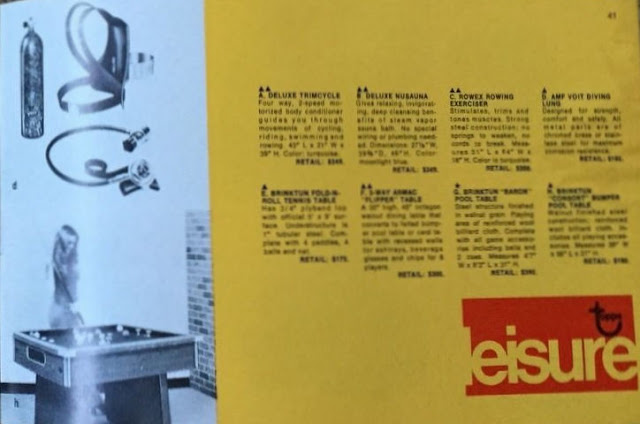 I especially like the Deluxe Nusauna and the Diving Lung!  The former strikes as something from a Three Stooges movie and the latter would be used for a type of activity that must have scared various team executives to death. But back to the money saving part-Topps could use retail prices when they probably got things at wholesale (or less)! Pretty sweet deal, no?

Topps had a system to keep track of the payments that also gives us a little more insight.  This Jim Palmer file card I swiped from Jon over at the the Fleer Sticker Project blog tells the tale: 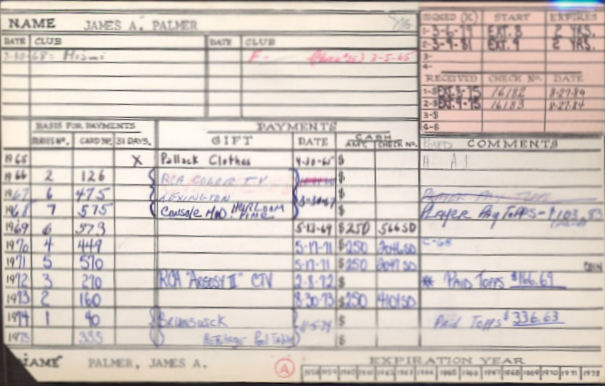 There is a ton of good information on here.  You can see how Jim reached his initial milestone to be paid by Topps (30 days on the roster had to go by first) during the 1965 season and he was dutifully immortalized in 1966.  You can see his card number and how he pooled his earliest "points" to buy a console TV (a big deal back in the day) but was filling out the den with a pool table by 1974. And perhaps most intriguingly, he was actually giving Topps money to complete some transactions! So Topps had a wholesale cost basis that would be "topped out" at retail if a player was short on time and wanted a big ticket item.  Nice!

In The Great American Baseball Card, Flipping, Trading and Bubble Gum Book, there is a great section in the front about operations at Topps right around the time the above gift catalog was issued. Sy Berger is quoted as saying "This year each guy will end up with about $400." There was also a royalty agreement described that sweetened the pot a little which I guess is how he got to $400 a man.

In 1973 or 1974 you were dealing with roughly 600 ballplayers and assuming most of them were on an extension, Topps would have had to shell out around two hundred and fifty grand at a time when wax packs went for a dime. According to Sy though, most players liked the process. He went on to say in the book "Richie Allen took a new refrigerator this year....Dick Green bought some farm machinery with his. And Al Kaline just bought his kid a new car."

I would love to know what kind of car was offered but I don't have any more interior pages to look through right now. Boy, times were different back then, huh?.
Posted by toppcat at 8:00 AM