Up North (Or Not)

Pretty much any collector of vintage cards is familiar with the Canadian firm O-Pee-Chee, which was founded as a confectioner in 1911 and started issuing, or distributing under license, various sports and non-sports cards in the 1930's, including several classic baseball and hockey sets and even a glass gun in the very early days prior to that. I'm not sure if the prewar issues they licensed were done so out of economic necessity or due to Canadian packaging laws of the era but after the end of World War 2 O-Pee-Chee went dark for a while on the trading card front, relying upon their confectionery line to sustain them.

Topps meanwhile, started selling Bazooka in Canada around 1948 and, at a minimum, Tatoo gum as well.  They also were selling their bulk gumballs, known as Bozo, in Canada and may have made that product Canadian only for a decade or so to boot.  Meanwhile, after watching Parkhurst issue a popular string of hockey cards up North, Topps launched their Hockey card line in 1954-55 before shutting it down after what were probably fairly dismal sales.  Topps only had the four US NHL teams for their inaugural issue while Parkhurst had all six. It's thought by hockey card guru Bobby Burrell that this set was imported into Canada and did not see sales in the United States, although the Bazooka prize and premium inserts that came in the pack have a Brooklyn mailing address so it's up in the air I guess.  The set was definitely printed in the US and imported.  In addition to the indicia on the cards and wrapper, I have read about an accident involving a shipment of these from Detroit (O-Pee-Chee HQ was in London, Ontario about 100 miles northeast of Motor City) but can't locate that article now but do recall a number of cards were destroyed. I would put this set in the top five of all Topps card designs by the way: 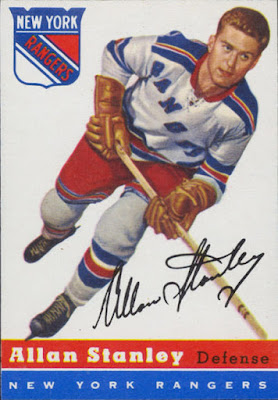 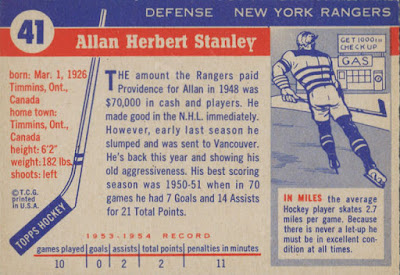 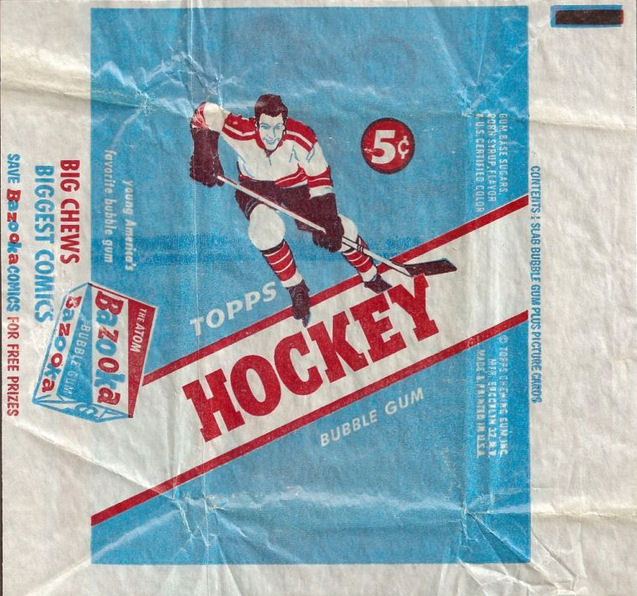 Topps bailed on the 1955-56 season and then it seems like a license problem (meddling by Topps?) prevented Parkhurst from putting out a set in 1956-57 . Topps also missed 1956-57 as did Parkhurst but both companies came back strong in 1957-58 with sets; Parkhurst now only featured the two Canadian teams while Topps had the four US entries.  This truncating of the Parkhurst issue strongly suggests to me that Topps managed to cause enough havoc with the NHL, or the individual teams, to prevent anything coming out for the 1956-57 season.  It's thought that Topps issued their cards near the beginning of the season and then Parkhurst issued theirs after the New Year, a pattern that would seemingly continue as long as the two firms competed with each other.

This 2/4 split of teams would continue until 1960-61, when Parkhurst managed to snag the Detroit Red Wings for their set, likely meaning that each team was able to negotiate their own licensing deals at the time. 3/3 would be the pattern until Parkhurst gave up issuing cards after their 1963-64 issue.

Now back to 1957-58, where the cards are definitely from the lower 48 but also have been French-i-fied: 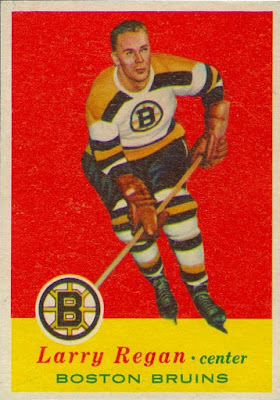 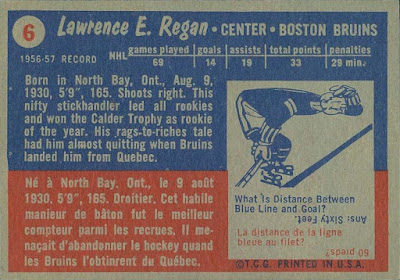 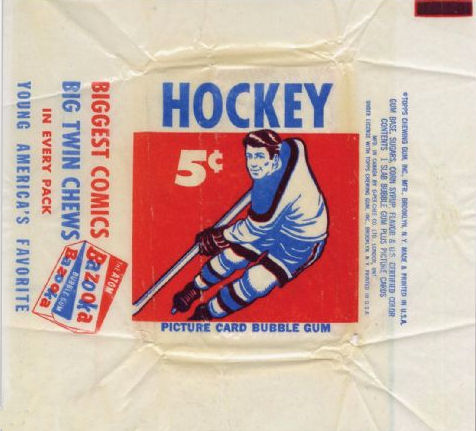 Every source I've seen indicates the Topps and O-Pee-Chee licencing arrangements commenced in 1958 across multiple product lines and that year is cited as the year the cards started being printed in Canada. But looky here:

What exactly was made where? There are two manufacturers and two countries of manufacture listed, with no breakdown of what was done where. The cards were made in the USA, but was the wrapper or gum?  How can you tell?!

Following this, for the 1958-59 season, as Topps seems to have determined their business model in Canada would be a lot more sustainable if a Canadian firm actually handled the manufacture and distribution of their products. There is a cohesive body of thought in the hobby that for the next decade O-Pee-Chee made all their Hockey sets from Topps production materials starting with this season but it's not quite as simple as that as once again the cards were from the U.S.: 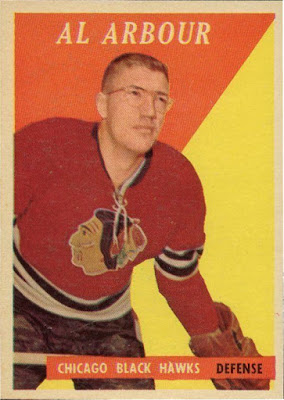 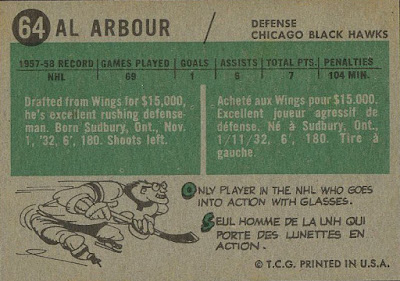 The ultra scarce 1958-59 wrapper is at odds with the cards, noting everything was made, distributed and printed in Canada under License with Topps. 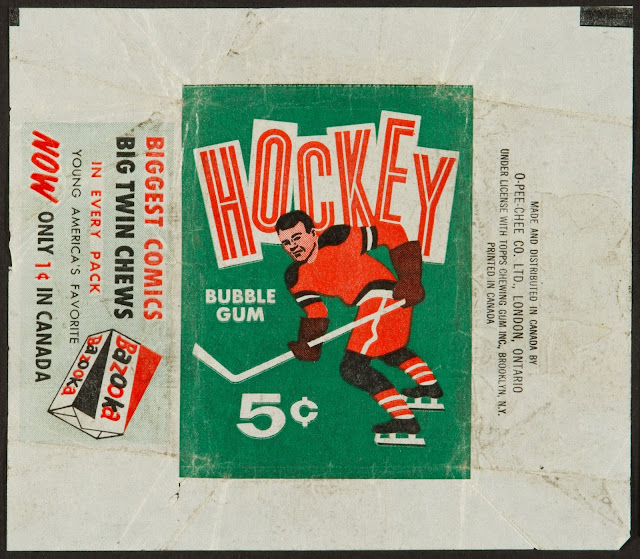 Interesting that the Bazooka ad is American and Canadian-oriented at the same time! 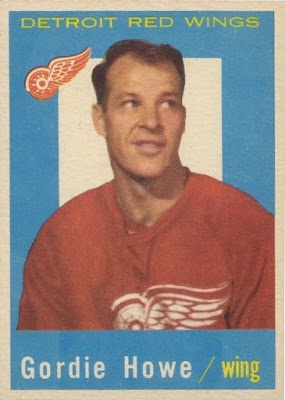 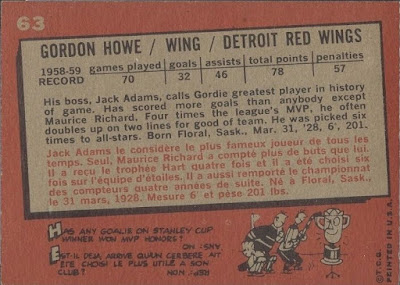 Bobby Burrell was kind enough to forward a scan of the almost impossible 1959-60 wrapper; it's virtually the same as the prior year, just with the primary graphic color being yellow.  The indicia remained the same though but dig those felt initials, a Topps premium mainstay since the 1940's: 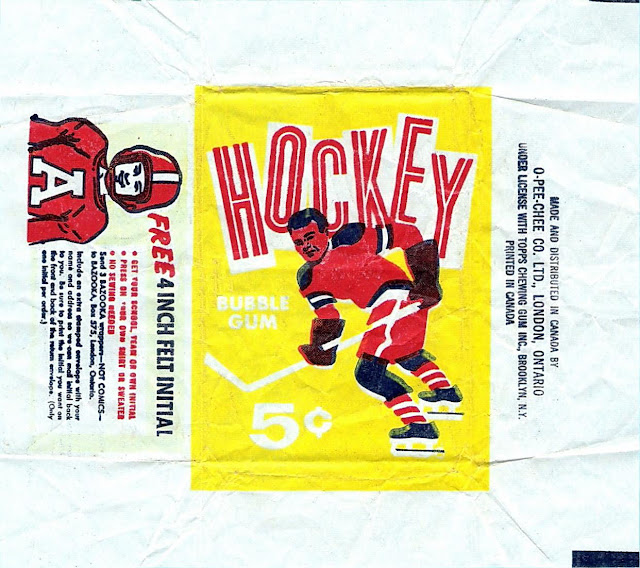 For 1960-61 though, it's a different story entirely. The cards are still American made: 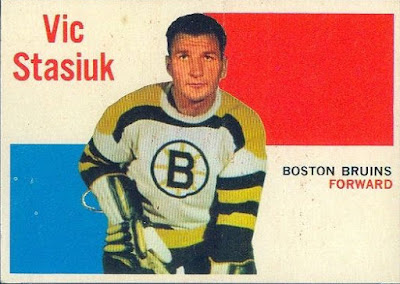 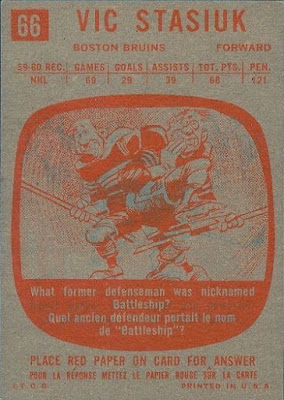 While both Topps and O-Pee-Chee information is on the wrapper; as you can see there is a bit of a conflict: As with the 1957-58 issue, I'm going to take the last "Printed In U.S.A" as referring to the wrapper, although that could be incorrect as the mailing address for the premium album (which we have seen here) is in Ontario- not to mention the cards once again stating they were printed in the USA!

Beginning in 1961-62 the cards themselves started displaying Canadian indicia, although Topps (T.C.G.) was still shown as the manufacturer; it would seem they truly began sharing production materials with OPC at this juncture. This is the only Hockey set that mentions lithography by the way: 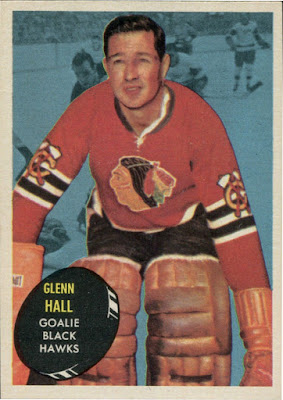 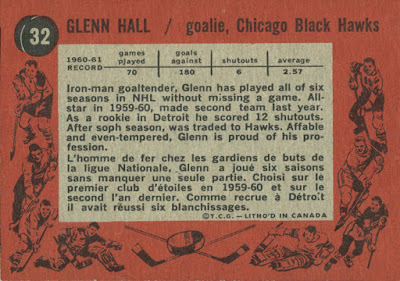 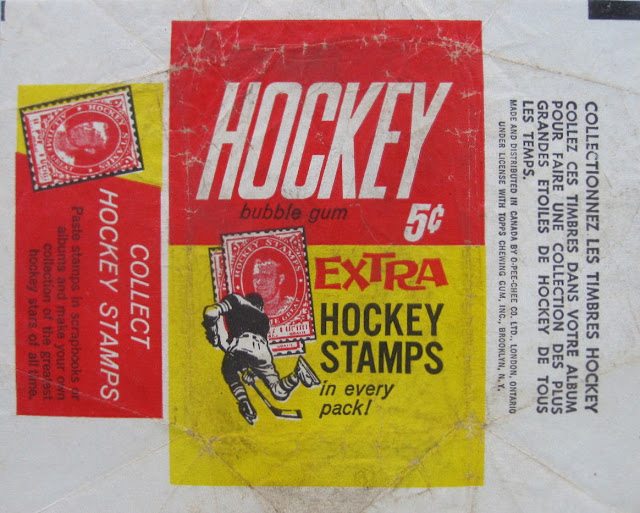 Basically I am of the opinion that the sets were more Topps than O-Pee-Chee until this year, and then more O-Pee-Chee than Topps accordingly going forward.  Clearly the Canadian production of all materials and confections associated with the Hockey sets commenced in 1961-62.

Stay tuned, we'll look at most of the rest of the 60's tout suite, next time out.
Posted by toppcat at 8:00 AM

It's funny that when they went "all Canadian" with the Bazooka ad, they didn't change the spelling of favorite to the Canadian version: favourite.

I've often wondered which company created i.e. took the pictures and wrote the script, as opposed to simply printed both the Topps hockey cards and CFL cards from 1957 to 1965.