Topps doesn't have any New Year's themed sets, otherwise I'd probably be posting about such a thing but as we start our ninth (!) calendar year here, I'm going to turn the WABAC to 1963 and take a quick look at the Bazooka All Time Greats set. I did a short post a while ago on these but want to take a closer look at the "silver" variations that are circulating. Besides, I'm on a bit of a Bazooka research bender these days.

Topps may have thought 1963 would be another year where Fleer issued an old timer's set, as they had for three seasons, but Fleer elected to try a set of current major leaguers, which Topps shut down after one series. The 1963 Topps regular issue only had a single insert, 46 Peel-Offs that would hardly have filled out all seven series of cards while they were competing with Fleer so it's a bit odd their other insert set went into Bazooka boxes destined for the nation's supermarket and variety store shelves. I have to suspect the timing was such that after shutting down Fleer they decided to just put the All Time Greats, which feature  T.C.G. indicia, into Bazooka, which already featured what was becoming a standard three card panel of current players. 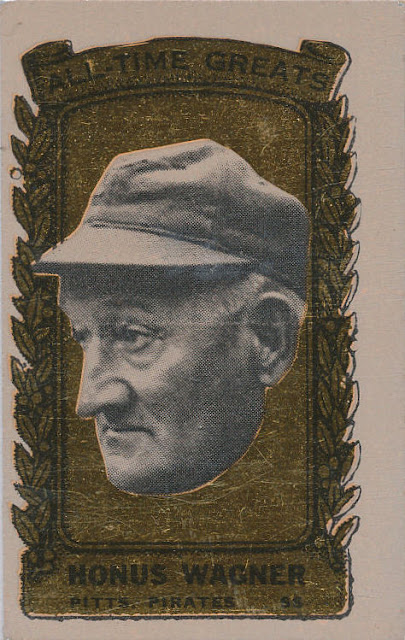 You can see how the gold foil scratches easily and retains production marks.  When the cards are in nice, spiffy shape they really pop.  In contrast, here is a "silver" front: 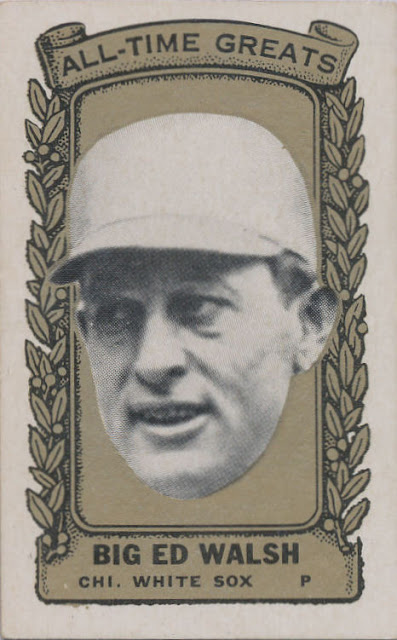 You can see there is no gold foil present, although I have to say they still look pretty nice in this format.  It's easy to think the foil just wasn't applied to the silver cards but that's not the case, as evidenced by the backs.  Here is the back of the gold Honus Wagner card: 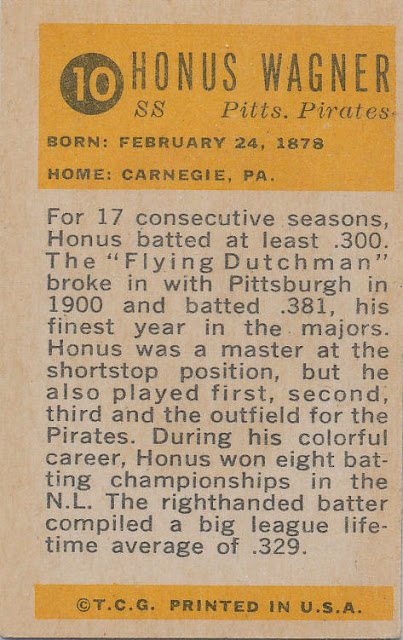 The mustard yellow blocks are prominent but on the silver cards, there is no block of color applied: 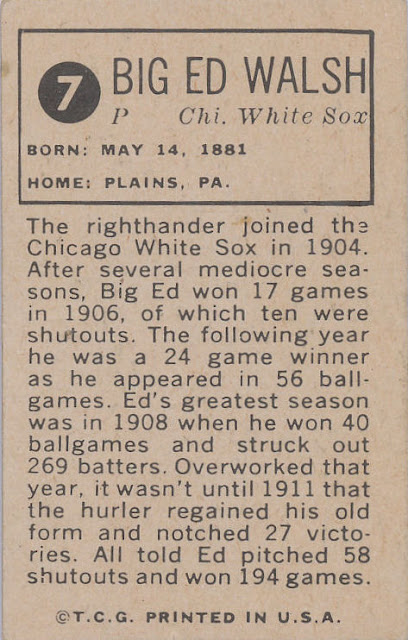 Clearly these were intended to be manufactured just a little differently.  So what's the story?  Some sources I've seen say the silver cards were issued in larger than ordinary Bazooka boxes (normally they were either 20 or 25 count) of 100 pieces or so, while others offer no opinion at all.  What I can tell you is that the November 3, 1963 Fifth Catalog Additions to the American Card Catalog mention both the gold and black-and-white backs so they were both produced in or by 1963. The 20 and 25 count boxes both state there were 5 Golden Edition" cards in each box. My best guess is that Topps had a final run printed up, awaiting the golden touches and then just used the cards anyway to finish out the 1963 Bazooka baseball issue. They are about three or four times scarcer than the gold cards but not particularly hard to find so some fairly large distribution of them occurred.

Here is the "Golden Edition" checklist, see you all in 2017!