I've written a couple of posts over the years about the 1973/74 Topps Action Emblems, which was an attempt by the company to introduce their own versions of Major League Baseball team logos that likely arose out of a desire to stop paying licensing fees to MLB.  The set is not widely known as it doesn't depict any players as subjects and while examples can be found on eBay they are not all that plentiful.  In addition, three differing formats/mediums were used.  Here is a typical example: 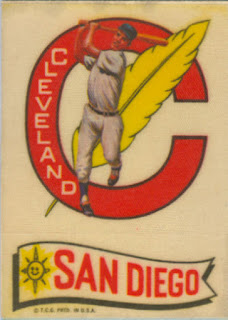 Certainly less well known among collectors are mockups of some football versions of the Action Emblems. This one has been known for a while and features fanciful Atlanta and Miami logos: 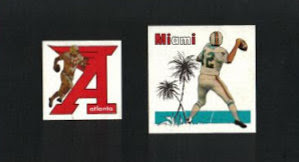 Love the palm trees!  Now that was the only example I had ever seen of the football version but another has popped up of late: 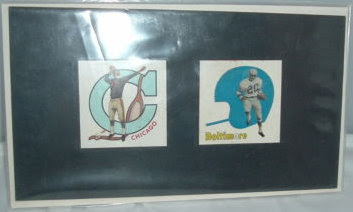 More ersatz logos, this time for Chicago and Baltimore. Topps did not have a license to use the NFL team logos for any of their sets issued between 1970 and 1981 (see here for some really good background on this) and I would date these mockups to the mid 1970's. So this has me thinking that instead of avoiding the use of the official logos, Topps also wanted to avoid use of the team names. It never came to anything but I wonder if a dispute was brewing with either or both of MLB and the NFL at the time over using the team names. The baseball stickers only have city names as well so it's plausible. Let's not forget how they avoided using the Astros team name for a good portion of the 60's due to a lawsuit over Astroturf-Topps was clearly sensitive to potential litigation in this area.

I wonder if any more of the football mockups exist? I'd love to see them if they do.