Every once in a while a Topps item comes up at auction that absolutely floors me.  Presently, this year's winning entry belongs to the good folks and Friends o'the Archive at BST Auctions.

Topps released a scarce set of Baseball cards on the backs of certain Bazooka boxes during the summer of 1959.  Twenty three in number, the set features gorgeous color photography (possibly the best ever done by Topps) and has a number of ridiculously short short prints and two variations of the Hank Aaron card.  471 have been graded as I type this and two boxes are also noted in the PSA pop report.

However, if you really want a scarce Bazooka set from 1959, you need to purse the equally spectacular Football cards. With 18 subjects and two variations of the Chuck Conerly card it's about twice as hard to find an example based upon PSA's grading. No boxes are shown by PSA but BST has one in their upcoming auction of goodies, many of which hail from the formidable collection of yet another Freind o'the Archive: Mike Blaisdell.

Feast your eyes on this: 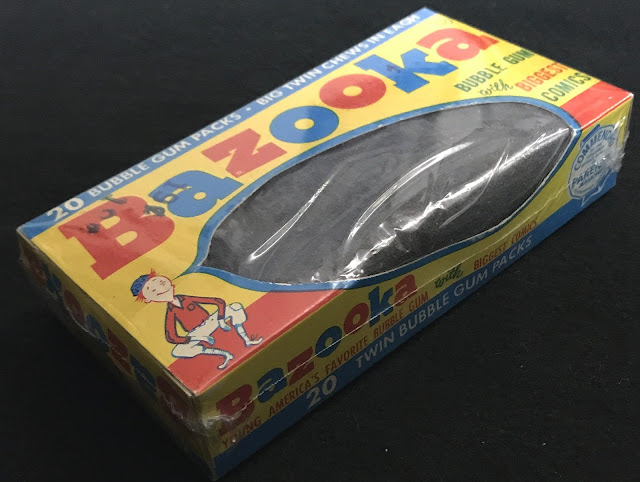 Wow, right?!  A couple of points:
1) How the cello survived almost 60 years is beyond me.
2) That's the original Bazooka Joe blowing a ginormous bubble around said cello
3) There's no splash on the front saying a football card lurks on the back, which is kinda weird. 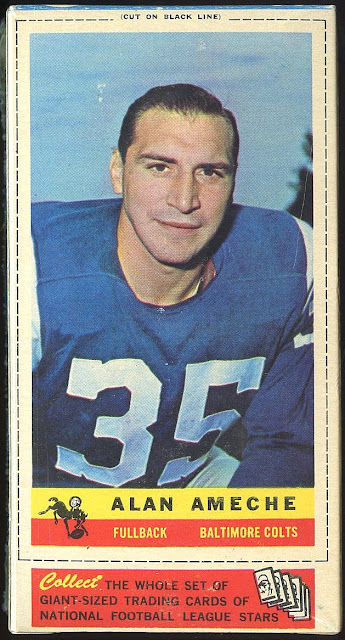 Like the Baseball box, it was the 20 pack that had the goods:

There wouldn't be another Bazooka Football set until 1971, when they issued not one but two sets, one in the US and another, stupendously rare one in Canada with CFL players.  Baseball of course was represented every year through 1971 so it's safe to assume the inaugural issue of Football was a bust, especially since the roylties paid by Topps to the NFL in the late 50's were negligible.

This is the only box like this I have ever seen; I can't find any scans of the two Baseball boxes that PSA has graded so for now this is the only eye candy available.