Friend o'the Archive Lonnie Cummins recently sent along one of the most stupendous Topps trade ads I have ever seen.  Dating to 1967 this ad details failed test issues-and there's a bunch! 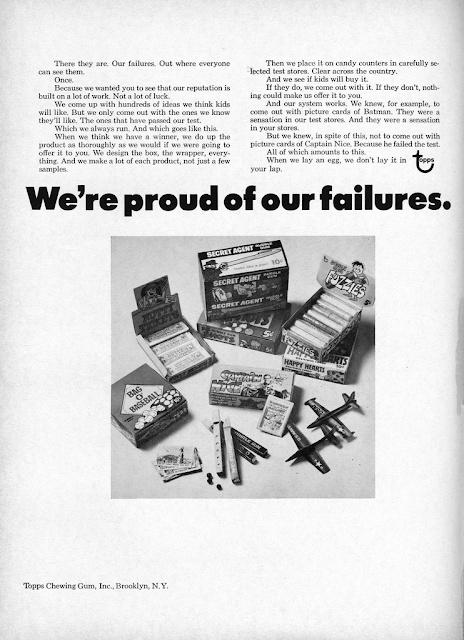 It's easier to see if I blow up the photo: 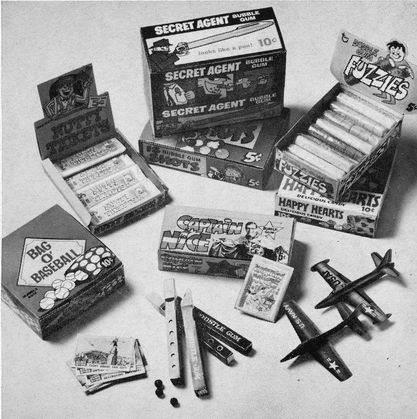 Secret Agent Bubble Gum and Bubble Gum Shots capitalize on the interest in James Bond/Get Smart spy thrillers then sweeping the country.  A pen shaped piece of gum is not all that exciting, now is it?  It seems this would have been a good way to repurpose Get Smart Secret Agent kits but it's just a confectionery item. Bubble Gum Shots?  No thanks.

Going clockwise we get more confections. Fuzzies sound gross and Happy Hearts candy must have been a test for a Valentine's Day product.  Below them though we get to Captain Nice, a legendary rarity among test collectors.  I am freaking out over that box-wow!

The planes are Fighter Planes. They are even tougher than Captain Nice and I've only ever seen packs, never an assembled toy. As I have determined from my research, the planes date to 1967, just like the Captain.

Whistle Gum gives the purchaser a plastic flute I guess. The next item is a lot more interesting though-King Kong makes an appearance! Kong dates to 1966, despite a 1965 copyright as it's one of the first Topps sets to have a commodity code on the box.

Bag o'Baseball bubble gum is intriguing but looks like straight up confection. That leaves us with Nutty Tickets, another 1967 set which is tough but never struck me as being "test issue tough".