Fit To Be Tied

Well gang, the parade of Topps product keeps rolling in to the ol' research complex, populating my type checklist at a fairly steady pace, although I'm at the point I am hauling in mostly tougher or oddball items that don't appear all that often.  Today's entry is 1968's Wise Ties.

I've discussed them here previously, and shown the pack version of the checklist here but this is the first time I've had one in hand that's not in a pack still. It's quite colorful in person: 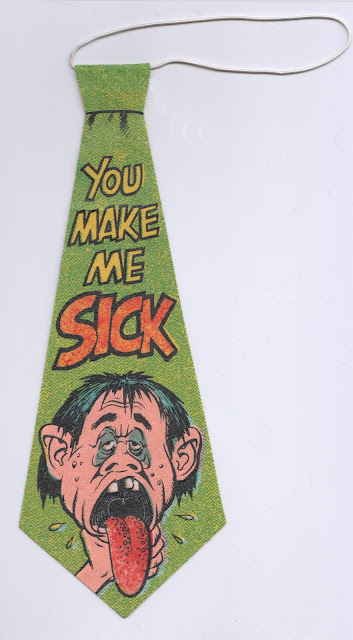 I was wrong years ago when I wrote they might be made of thin plastic.  They are made of a kind of crepe-like felt or, more likely pressed cloth, and measure 9 1/2" from top to tip.  The band is elastic and still quite pliable on my example.  I suspect, now that I have seen it, that the elastic band is what caused them to be pulled from the market, 12 shy of the planned 24 ties. The retail box holds 12 ties and much of the unopened material in the hobby of the set must come from overstock and returns.

The material used is very thin and light, call it semi-transparent: 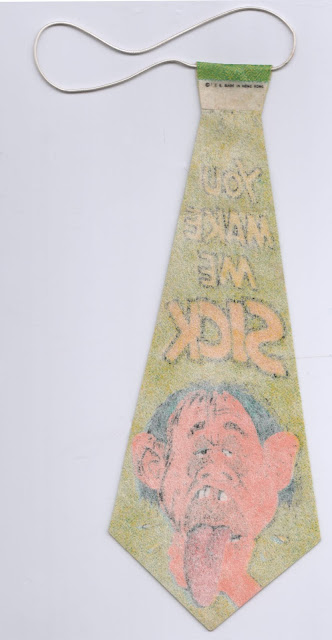 Here's a closeup of the reverse of the "knot", I know you can get nice suits made cheaply in Hong Kong but crepe-like ties?

Topps had zillions of similar style sets in the 60's and early 70's, likely the result of so many Mad Magazine and underground comix artists working there. I would love to see what the twelve  unissued ties look like.  In fact, I am trying to come up with the most efficient way to get images of all the really weird and odd sized Topps NS sets of the classic era documented as so many are practically unknown and/or hard to scan.  Stay tuned...
Posted by toppcat at 8:00 AM