Give 'Em The Bird

Two or three years ago I posted about a large index card that showed a bunch of information concerning Jim Palmer, specifically what he received from Topps each year in the form of cash or merchandise, in exchange for the right to use his image on their products.  Palmer had a long career and his card had been annexed, with a small additional piece stapled onto it.  It turns out that little stapled flip was concealing some good information about the process Topps used to sign and retain baseball players.  Thanks to a Friend o' a Friend o' the Archive Chuck Wolf, name one Andrew W., there is a player payment card we can examine that covered to totality of Mark "The Bird" Fidrych's Topps career.

Fidrych, who was tagged with his nickname by his first professional manager due to his resemblance to Big Bird on Sesame Street, had an extremely parabolic major league career and attained lasting fame in 1976, putting together a rookie campaign that ranked with the best of any postwar pitcher but also gained attention due to an eccentric personality and mound presence.  He made the Tigers out of Spring Training but didn't really get going until May, when he uncorked a string of stellar starts.  He would talk to the baseball before pitches, excessively groom the mound like a Bonsai garden, circle around it and then shoo away groundskeepers who came near it. He became a media sensation almost overnight, back in a time when that actually required some effort, made the All Star team (starting but losing the game) and ended up finishing second in the AL Cy Young race to, of all people, the aforementioned Jim Palmer.

He was also the 1976 AL Rookie of the Year and of course made the Topps Rookie All Star team. This would earn him the distinction of being , I believe, the only player with a Topps All Star card featuring a Topps rookie trophy symbol: 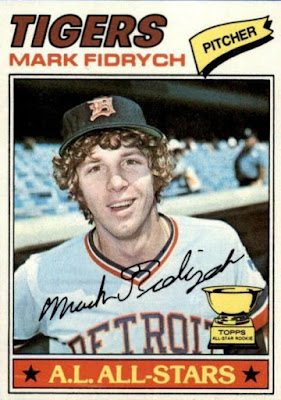 He hurt his knee early in 1977, still pitching well but his arm went dead and he was never the same and threw his last major league pitch in 1980, then pitched in the minors for three more years and that was it.  If you want more of the story, his ledger card at Topps tells it well: 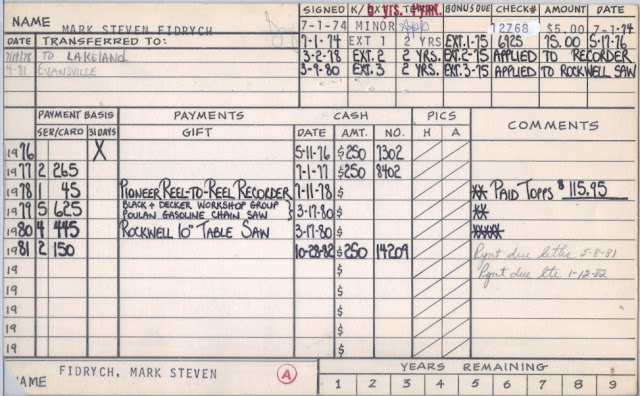 You can see at the top left he got sent down in July of '78, likely for a couple of rehab starts after missing the vast majority of the season. He did not pitch well the next two years and was demoted to AAA by Detroit in 1981, which ended any interest Topps had in him.

The top right portion of the card details a few things.  Firstly, once he signed a professional contract in 1974, Topps gave him $5 in "steak money" in exchange for his contractual rights to appear on cards sold with bubble gum. They did this for thousands of minor leaguers.  Fidrych then  got a $75 extension bonus for a two year period in 1975, which roughly corresponds to his promotion to AAA ball that year.  That extension bonus was referenced in the Jim Palmer post and I'll show a relevant excerpt for the Topps Gift Catalog provided to players that appeared here previously (this one if for 1973-74: 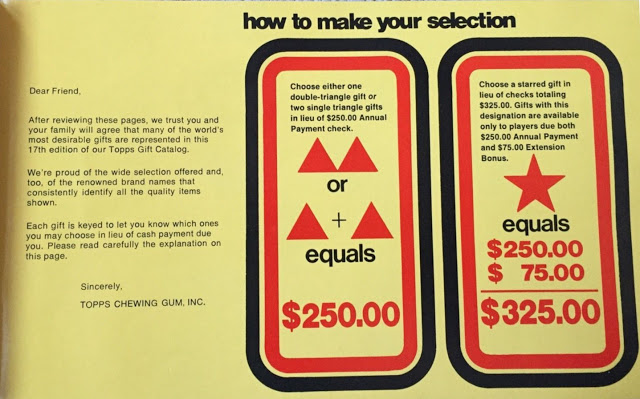 Once you made the majors (and stayed on a roster for 30 consecutive days), an annual $250 payment was made by Topps and your extension bonus kicked; I think it took a little longer in the 60's to extend but I guess the players (or more accurately, Marvin Miller) got better at negotiating with Topps. Fidrych got his for 1976 and '77 then they gave another two year extension in 1978. You could combine payments for gifts, take the cash or bank what you had.  These lovely and underpaid ladies kept track of it all for Topps:

Sometimes players picked gifts that exceeded their bank or annual allotment.  They would then write a check to Topps for the difference; Jim Palmer did it so why not The Bird?!

You can also see Fidrych was delinquent for a time, likely due to his thinking he would get his extension bonus for 1981!  Somewhat tragically, you can see he was taking some machinery as gifts, possibly as he was buying a farm, where he would be killed in an accident in 2009. He also took some state of the art audio equipment prior to that. It's fascinating to me how all of this dovetails and this ledger shows the sad arc of his career.

1) There are columns for series & card #, and the series column still got filled in even though Fidrych never appeared in a set which came out in series.

2) Somebody at Topps had exemplary penmanship!