It's looking like a pretty good year for Bowman ephemera, based upon a couple of unique and interesting bits that recently hit the auction block.

The first item to catch my attention was this shot of Joan Crosby (whozat? you ask) from June of 1953, offered by RMY Auctions: 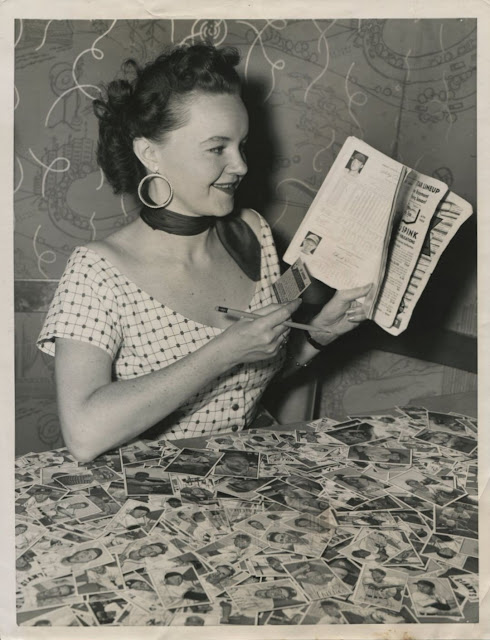 To fill you in, Joan Crosby was one of the agents used by Bowman to secure players for their baseball cards; her territory covered the Northeast US, including Philadelphia and New York.  It turned out her inability to access the MLB clubhouses of the time provided a major opening for Sy Berger at Topps, who of course had access to players in the clubhouses and who was also the son-in-law of Jerome Karpf, Managing Editor of the New York Evening Post which, I am assuming, also helped.

Ms. Crosby worked for an outfit called Art Flynn Associates, which also employed a fellow named Jack Tanzer who covered their more western territories. Berger of course, eventually hired a MLB scout by the name of Turk Karam to assist him in his signing efforts.

The copy on the reverse is Mad Men-esque: 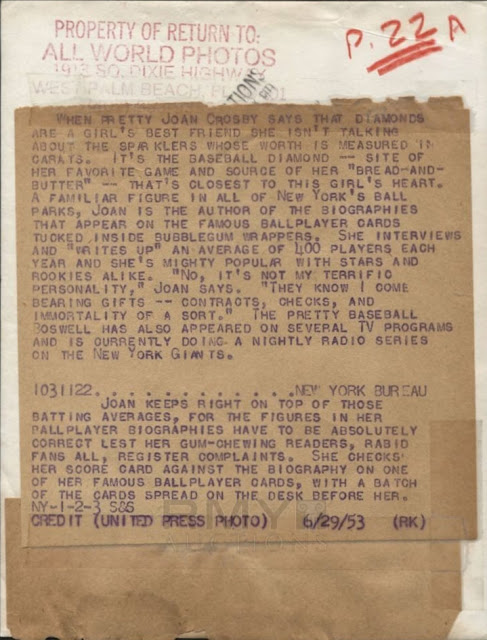 For reasons I will get into momentarily, I don't believe she wrote card backs as that was, by all accounts I have read, the province of Bowman's art and ad agency run by George Moll.  Perhaps she worked for them at some point although I doubt it. Also dig the Woody Gelman red crayon at the upper right, likely referring to his filing system at Topps, which must have ended up with a trove of Bowman documentation post purchase.

If that wasn't enough, Heritage Auctions recently offered up Mickey Mantle's 1951 and 1955 Bowman contracts and a couple of other related items.  I suspect a collection of Bowman related ephemera is being dripped into the hobby, with the choicest pieces now appearing.

Herewith the Mick's agreement to be Bowman-ized: 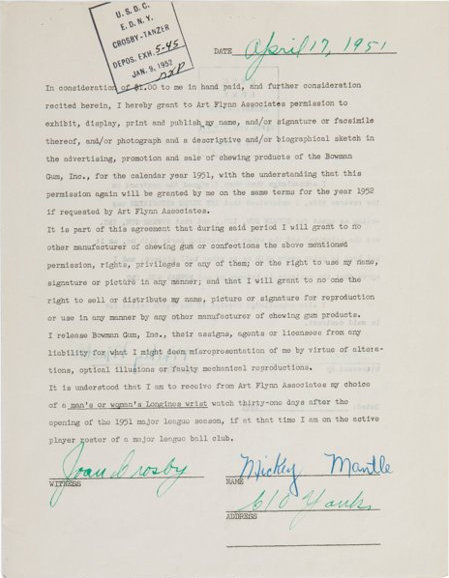 That stamp on top means this document was a deposition entered into evidence in the original lawsuit Bowman filed against Topps, asserting the right to use the phrase "baseball" in selling bubble gum cards was solely Bowman's. I've got a cancelled check Bowman wrote out to Whitey Lockman in 1949 that also has the same stamp.

Turns out Mickey got some steak money four days earlier to start the process: 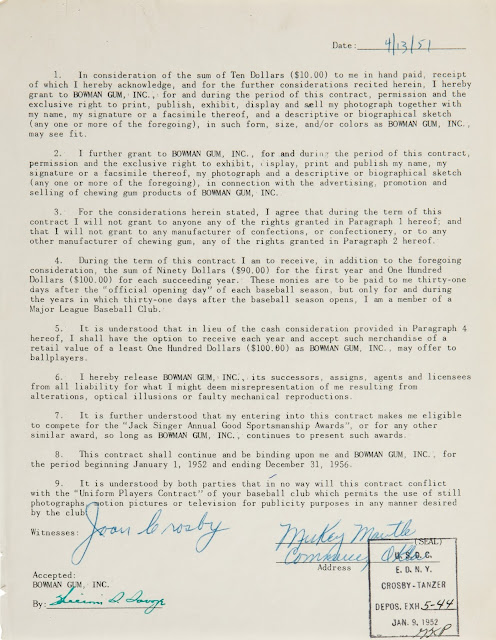 The 1956 end date is interesting, isn't it?  I wonder if a number of the early Bowman signees had contracts ending that year; it may help explain why Topps was able to buy Bowman out from John Connelly in February of that year if he didn't want to get into a low rent bidding war as he was preparing to greatly expand his other business, Crown Cork & Seal.

If there was any question as to who Mantle signed with, it was memorialized in this acknowledgement: 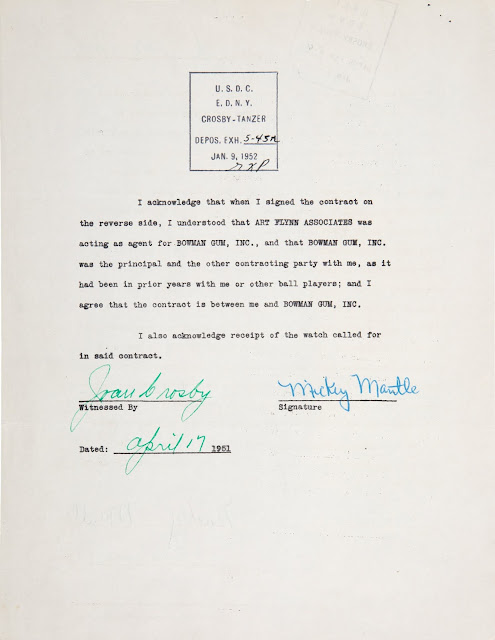 Topps prevailed in the original suit filed against them by Bowman but appeals and new suits emerged and in early 1953 a ruling came down asserting ballplayers (and everybody in the United States) had the right to control how their image and name was used by third parties. Ongoing legal actions seem to have dragged things out even further until, in the early days of 1955, this document was signed. 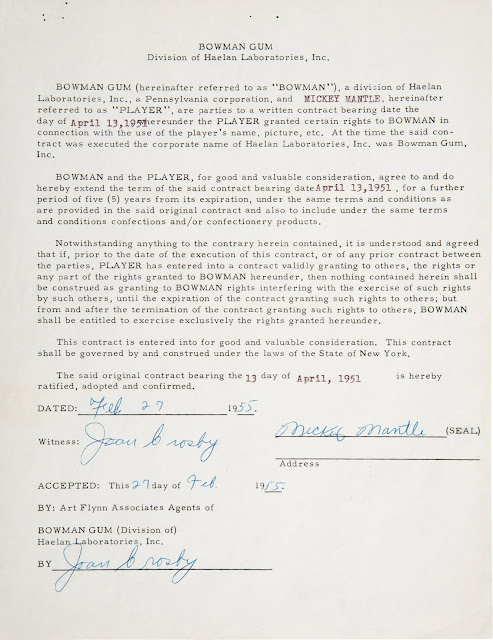 All of this gives more insight into a very important and interesting time in the early 50's for Topps and Bowman. Hopefully more Bowman documents leak out soon.