Some cool and unusual sightings on the interwebs over the past several weeks that didn't really seem to mesh into coherent discrete subjects are the focus today pilgrims.  See if you can cipher the theme!

A lot of the innovative Topps sets of the 1960's and 70's were actually kind of swipes of earlier things, many from the 1930's where I assume they held some sway over Woody Gelman. Check out this 1934 ad, bottom left to be exact: 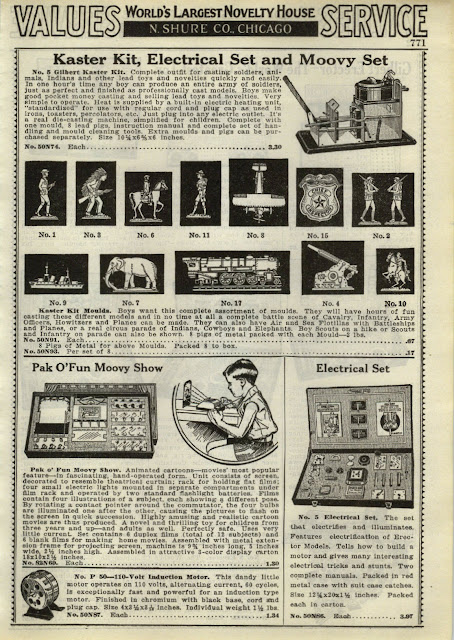 Yup- that's an antecedent to Pak o'Fun, which became a 1969 Topps release of some current difficulty in assembling, seen here in uncut sheet form at Heritage Auctions: 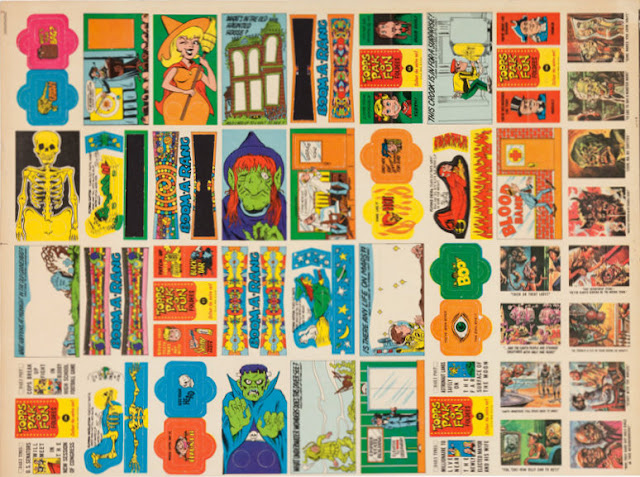 Good luck with this set, I'm still 5-6 cards short and a couple can't be found without the finger holes punched out. Talk about a mish-mash of things!  Laugh-In Necklaces, Funny Doors, You'll Die Laughing, Flying Things and Foldees are just some of the other sets being sucked in here (or jettisoned out, as the case may be).

1971 brings us north of the border, where O-Pee-Chee issued a modern rarity, the Bazooka NHL package design set, shown here with some Bazooka Joe and the Gang wrapper roll footage:

Back to something a little more weird, here's some uncut strips of the 1976 Fancy Pants, a truly problematic issue to find these days. Those tops are sliding off the backings, as is the case with many sticker sets of the era:

A dozen years later, although it seems more like that many light years, from an issue that cops from Pak o'Fun, these activity cards from 1988's Pee Wee's Playhouse are hard to find for a more modern issue. This is primarily due to horrible collation I think.  I bought two boxes years ago and ended up with 35 copies of one of the activity cards-yikes! 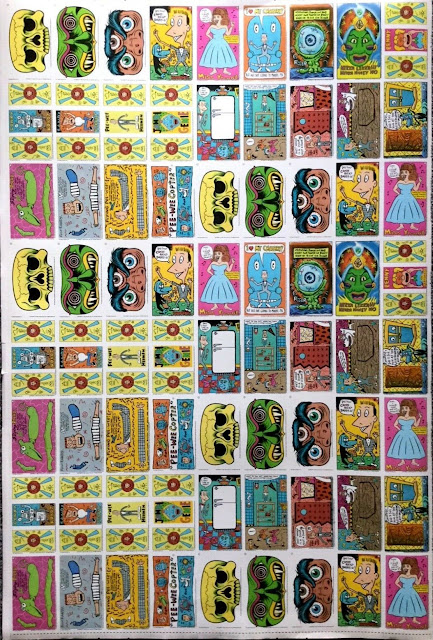 Finally, while I almost never post about post 1980 issues (rule already broken above), here is a Topps Heritage homage to the 1969 Decal inserts from 2018 that I think looks sweet: 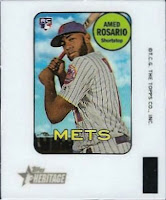 What comes around goes around again, sometimes more than once!

Great find on the 1934 ad. What caught my attention was the Kaster Kit as my father had one from when he was a kid, which would have been around the time of this ad. The ad brought back a lot of memories. In addition to the soldiers, there were also baseball player molds. I created a number of players and painted them to depict my favorite players.