Friends o'the Archive Lonnie Cummins has come up with yet another find as his survey of Topps oddities and curiosities continues. Today we turn to 1951 and look at some samples printed up in absolutely fabulous fashion.  I'm not sure these are true salesmen's samples, which Topps was on the cusp of producing but rather I suspect these were trade show handouts and the like, or perhaps provided to the jobbers who distributed products for Topps.  It's a fine distinction and one that deserves further study.

As near as I can figure Topps debuted four sets in 1951 and continued with Freedom's War which was introduced in 1950. It was a time of rapid transition for Topps as they dramatically and thricely increased their card sizes in 1950-51 before getting into the Giant Size issues during what many hobbyists consider to be their golden age spanning 1952-56.

The first size increase stemmed from the tiny cards issued with their non-Bazooka penny tabs and were merely reissues of two 1949 sets: Soldiers of All Nations/Flags of the World and Licence Plates,, which measured 1 3/4" x 2 7/8". I have dubbed these "post-tab" and they were quite transitory. Topps quickly moved to a 2 1/16" x 2 5/8" card that also ushered in a two year period of cards issued in two card panels that were sold in elongated nickel packs. In addition, these panels came in ten cent red cello's sold with out gum via their Trading Card Guild. This is why certain sets can be found with cards that are either non-perforated or perforated on one or two sides. This size I call "early-panel" and it kicked off wth Hopalong Cassidy and Bring 'Em Back Alive, or BEBA for short. Freedom's War came next and unknown to Topps at the time, was to be inexorably tied to BEBA in a decidely negative way (back to this momentarily).

Before that though, Topps issued Baseball Candy, a somewhat haphazardly thought out and produced set of cards that came with caramel and was their opening salvo against Bowman.  In addition to Team cards, Major League All Stars and Connie Mack All Stars found in five cent and higher packs, Red and Blue Backs also flew solo in penny packs in additon to being sold in panel form with cards from these other three sets riding along in some fashion.

As Baseball Candy fought for shelf space Freedom's War was on the receiving end of a number of protests that ended what must have been a top-selling set as a third series was planned but ultimately scrapped in the spring.  Topps President Joseph Shorin announced via press releases that  second series of BEBA would be issued instead but there must have been complaints about that as well (and/or Frank Buck's etstate declined to re-license to Topps) and they never appeared.  What did come out was Animals Of The World (AOTW) which continued the BEBA numbering but was the most benign looking set of the era.

This is all leading up to this, which was originally uncovered by Jason Rhodes (yes, another FO'tA) and then re-found by Lonnie: 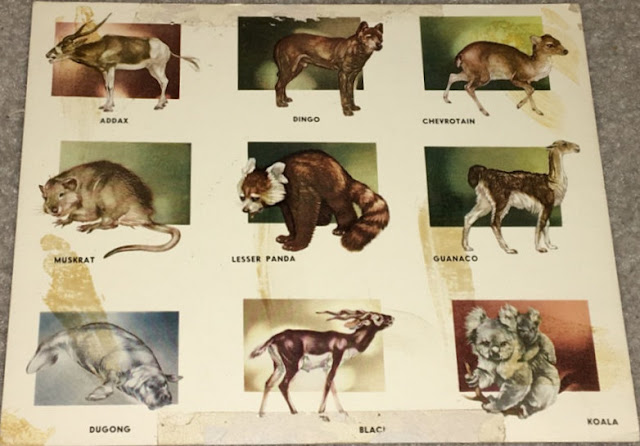 Note the nine card array.  The reverse though (or is it the front?) reproduced the display box art.  AOTW was the set name, Zoo was the name of the gum as Topps still made a distinction between product and confection at the time: 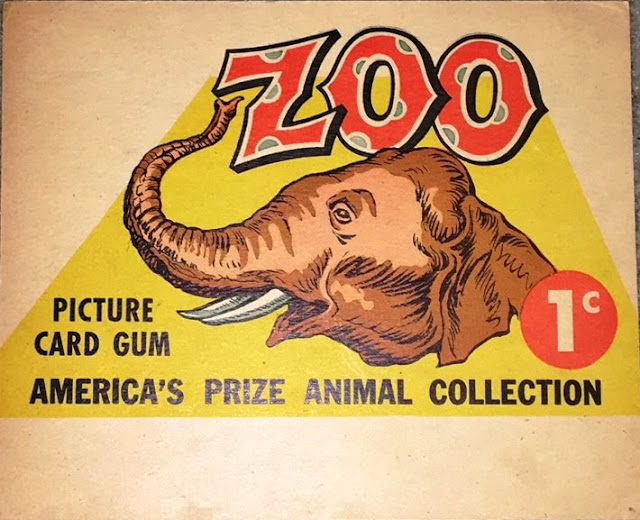 I had not seen this example previously but believed it existed and Lonnie proved me right.  What I'm not at all sure about is if Hoppy or BEBA ever had similar samples made up by Topps. I lean well toward no but never say never, right?

Also unknown-was Baseball Candy was given a similar treatment?  I say this because a subway car ad that Friend o'the Archive John Moran sent along some time back suggests it was possible: 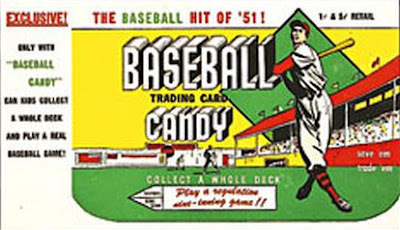 Back to the known-the next four sets Topps issued all got this ad treatment and also were produced in a  larger size card ("late panel" as I call it) that measured 2 1/16" x 2 15/16". Ringside was the next in line I believe and debuted the bigger cards. Friend o'the Archive Adam Warshaw has this bad boy in his collection (I have a cut up example that's similar-front subjects could vary- but his is quite intact and features Rocky Marciano): 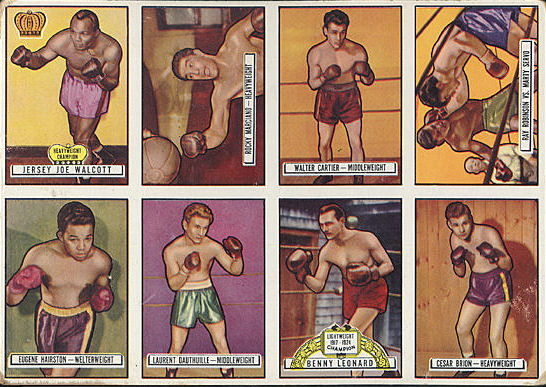 The larger card brought the samples down to eight in number. I love this graphic as it really shows the brutality of a prize fight : 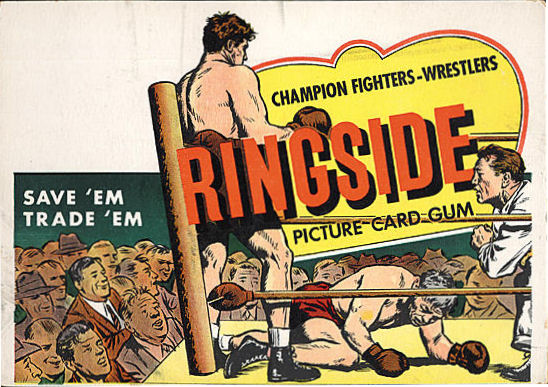 Next up is Magic Football and it's not nearly as great unfortunately, as this example from Friend o'the Archive Mike Blaisdell shows: 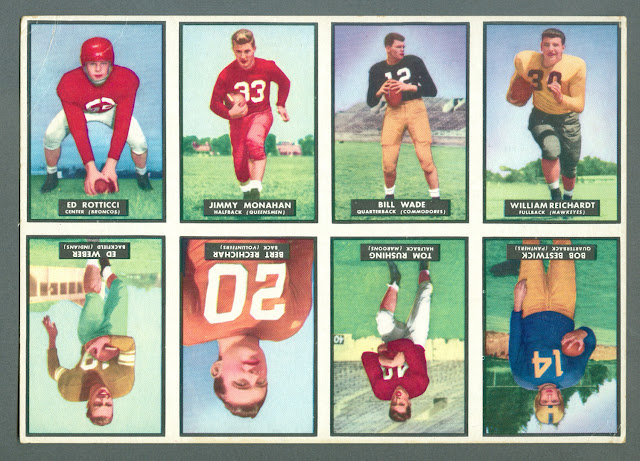 The up/down orientation is due to the scratch off feature on the reverse being located at the bottom. I think you'll agree this is not as nice as Ringside: 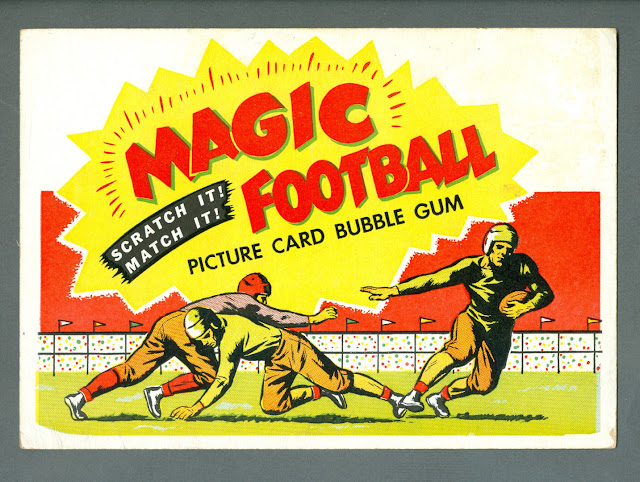 This brings us to Fighting Marines.  I'm not 100% certain but believe a sample exists.  It was probably offered in an old Legendary auction, whose archive is now guarded like Fort Knox by the present owners of that problematic concern. However, I found a scan of the display box art and I think it's entirely possible it saw sampling too: 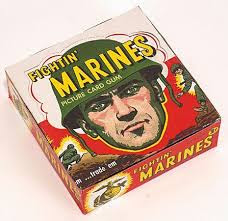 Given that Fighting Marines likely was issued at the end of 1952, this teases that other sets in this size like Look 'N See could also have been given this treatment given that it debuted earlier that year.  Scoop from 1954 probably didn't though and the photographic set Jets in '56 (the last that measured this way) was done up in a different style of sampler that used proper reverses, or ones that were very close to those on the issued product. Other than Fighting (or Fightin') Marines (the card back differs from the display box), those sets were not issued in panel form however, so I may need a new moniker for them!