I stumbled across a bit of an oddity involving Bazooka the other day and since it's something I've never seen before, figured I'd throw it out there to see what might stick (*groan*).
In 1977 Topps introduced the Bazooka Lollipop. It sold for a nickel and according to a source I found, tasted like bubble gum (which sounds fabulous, actually): 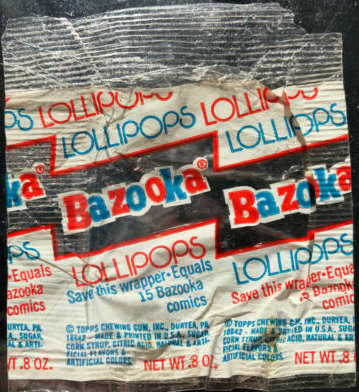 15 comics worth of premium power for five cents?  Deal! Ring Pops were coming, though and I'm not sure where this particular product lies in the evolution of those persistently top-selling Topps pops. As I detailed a couple of months ago, Ring Pops were either introduced in 1977 or 1979 but I can't find a source to confirm this either way. I suspect their introduction was closer to 1979 than 1977 and perhaps this lolly was a precursor or even a test. Or just a failed, separate experiment...
(EDIT 4/19/21): Lonnie Cummins advises Topps filed for a Ring Pops trademark on March 17, 1975.  I suspect that is the date to allow for test marketing purposes.  It would seem then that 1977 is probably the operational year full retail commenced.  If the Bazooka lolly was a test, it wasn't for Ring Pops.)
Ring Pops became (and remain) a monster seller for Topps and they have also been selling Bazooka Pops, which have a bubble gum center, for many years now.  The 1977 Lollipop though, had no such chewability within and echoed back instead to some very early Topps products.  I'm not sure which came first but it was one of these two products, one with a Christmas theme and one with Western flair: 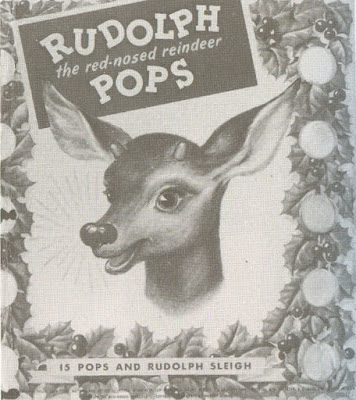 I lean toward Rudolph being the uber-Topps lolly as there was a 1948 movie followed by the massive  smash hit song recorded by Gene Autry that hit number one during the holiday season in 1949. The luractive but fleeting licensing deals for the franchise would probably have occurred prior to one of those events, so I make it either '48 or '49.  I cannot make out that copyright on the box and have never seen another example where the indicia might be deciperable.
As always, there's a chance Topps played catchup with Rudolph and Hopalong Cassidy was the first one in 1950, the year Topps procured a license as Hoppy-mania kicked in over his chopped down kiddie flick rerun fare that ended up as the number one filmed show on TV.  But I don't really think so.  Here's Hoppy again. 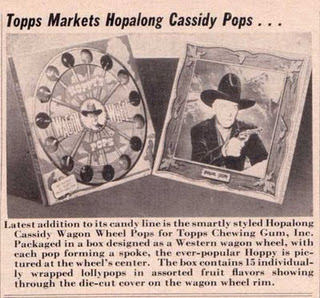 Topps had Santa Claus lollipops ready for 1951 and possibly also the year following but they shut down their Candy Division at some point soon thereafter and have to confess I'm not exactly sure when they made a pure candy play again, although it was well before the Bazooka lolly saw the light of day.
Posted by toppcat at 8:00 AM