How Great It Is!

I've not touched upon the somewhat puzzling 1971 Topps Greatest Moments set in quite some time and my prior peeks have been somewhat cursory.  I ran through the two proof sheets and before that gave a super short capsule review in a kind of catchall post a while back so it's high time I readdress these oversized (2 1/2" x 4 3/4") cards.

Their origins in the hobby are a little murky but the set of 55 was seemingly tested in Brooklyn and the Boston metro area during the summer of 1971. It's likely one or two other areas saw them as well (you would have to surmise test stores around the Topps plant in Duryea, PA had them) but Brooklyn and Boston are the only areas I've seen positively identified. A display box is known as is a test wrapper: 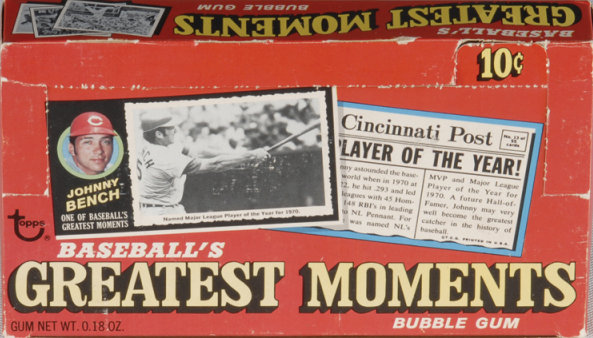 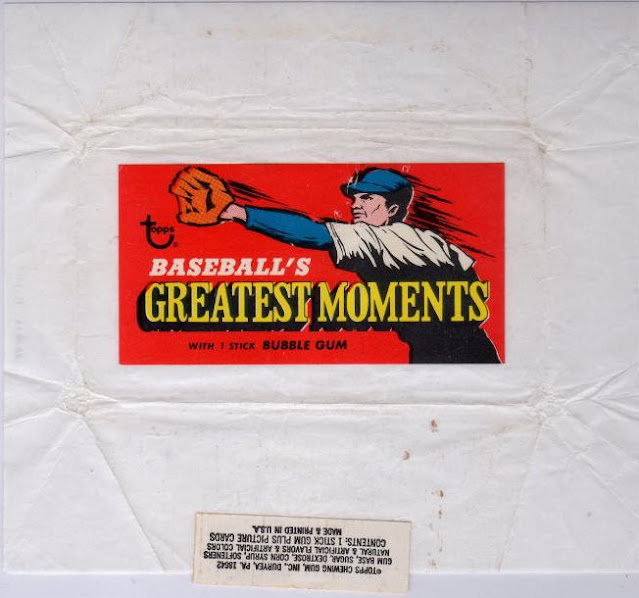 The earliest hobby reference I can find is in October 1971, where The Trader Speaks editor Dan Dischley gave his readers a checklist and quick rundown: 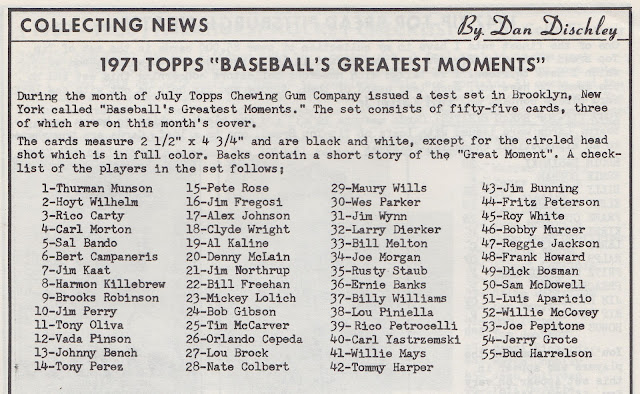 The cards look super nice.  I have three, two of which are Mets and those two are also short-printed.  Topps must have really liked the black border look in '71 - I know I do: 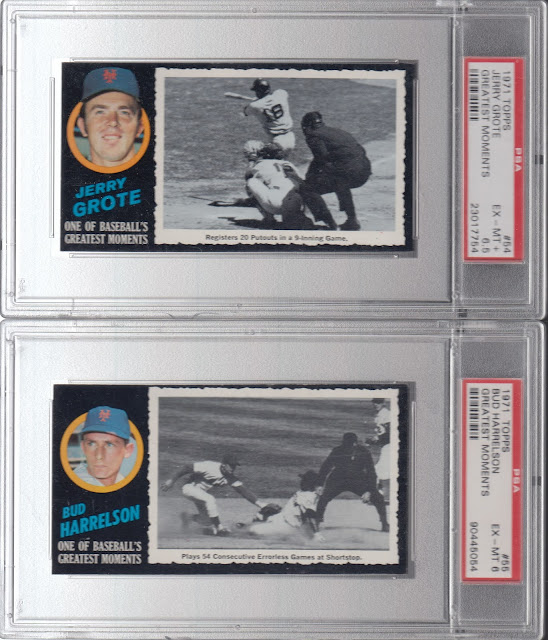 The backs tell the tales (both of which I remember happening as a wee lad): 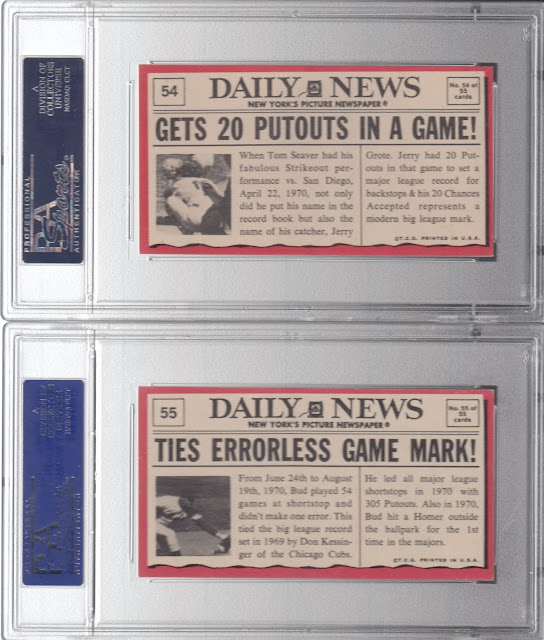 Topps was very much trying to get "super" sized sports cards going in 1970-71 and I have to assume they thought there would be enhanced profit margins selling such behemoths. They probably wanted to create a full "super" line, which was clearly being ironed out from 1968 to 1971, but the plug got pulled before any large size 1971 Football set would have been issued. It seems to me it's likely a combination of poor sales and cost-cutting efforts due to their imoending March 1972 IPO (the latter possibly influencing the poor retail distribution of Greatest Moments) killed these sets off.
The set has 33 short prints and 22 double prints.  The DP's are often found in groups of 22 while the SP's are usually found as singles in my experience.  The Double Prints are as follows:
1 Thurman Munson
4 Carl Morton
5 Sal Bando
6 Bert Campaneris
15 Pete Rose
16 Jim Fregosi
17 Alex Johnson
18 Clyde Wright
19 Al Kaline
24 Bob Gibson
25 Tim McCarver
26 Orlando Cepeda
27 Lou Brock
28 Nate Colbert
36 Ernie Banks
39 Rico Petrocelli
40 Carl Yastrzemski
41 Willie Mays
43 Jim Bunning
50 Sam McDowell
51 Luis Aparicio
52 Willie McCovey

As you have no doubt observed having read this far, the cards are mostly grouped by team.

Bob Solon, writing in the same October 1971 issue of TTS, was unimpressed by Topps "distribution" network shenanigans, although his prediction from 1972 was wrong: 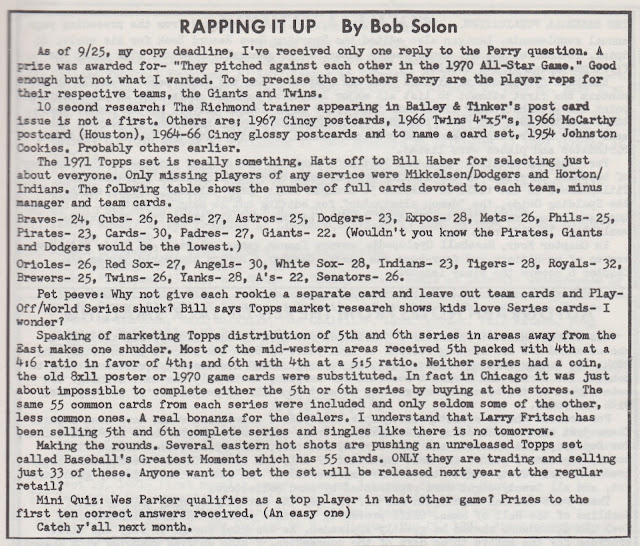 The ad from TTS November 1972 has a typo or two (I think he meant "55" not "33" and the year of issue is wrong) but gives an indication of how the DP's would be found in groups: 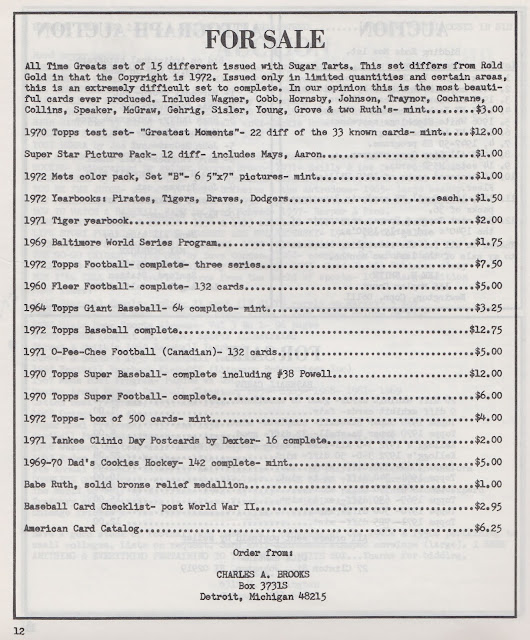 Supply was affected by the 1975 fire at the Card Collectors Company warehouse as this ad from February 1978 shows: 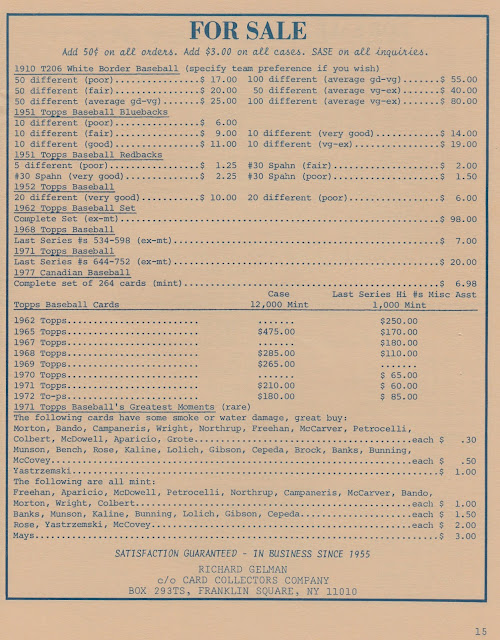 Looks like they lost a bunch of SP's and DP's alike based upon the Mint ones left unscathed by the blaze! Despite this setback, it seems most extant examples came from Card Collectors Company.

PSA has graded just under 4,900 of these, or about 63 of each slot (of 77) on the press sheet. Clearly an aftermarket supply, deservedly derided by Bob Solon, was made available and three or four favored dealers got some post-test stock one way or the other. The SP/DP pops run roughly 50-60/110-120 and of course for every graded card, especially black bordered ones, there are resubs and superstar skews, plus raw examples still in the wild (at some kind of multiplier like 3x I'd say if you sleuth eBay listings) but it's a good confirmation of the double print vs. single print ratio.

The set is one of the better looking extras issued by Topps over the years IMO.

I actually received a complete set of these cards as a bonus for ordering the complete set of either 1972 or 1973 Topps baseball cards from Card Collectors back in the day. Sadly long gone, but not forgotten!