Following last week's post, I thought I would take a stab at estimating how many 1952 Baseball high numbers Topps actually produced. It seems impossible but there's some information that can be used to give it a whirl.

Ten million leftover 1958 Basketball cards, as noted in August 7th's post, are one indicator of what could happen when a set didn't sell (we don't know the total amount of those produced though) but Topps had to give testimony and provide sales figures in the Fleer-FTC case in the early 60's and the latter totals were unearthed within by the late Bob Lemke some time back: 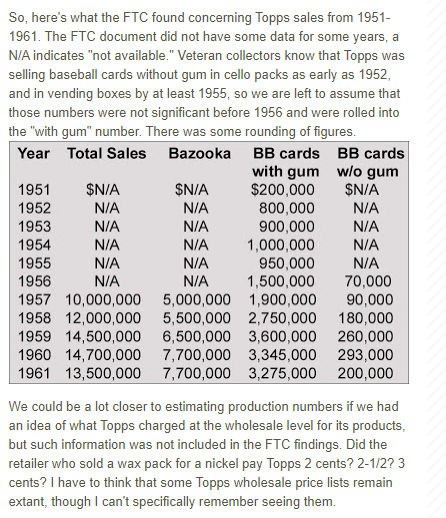 I'm not so sure Topps just combined the gum and non-gum figures.  Topps had good reasons to keep the lines segregated and I'm taking their numbers at face value for purposes of this exercise.

Here''s a 1952 Baseball high number wrapper, just for the sake of showing it.  The upper's part's blue area was green for the five series that came before the sixth: 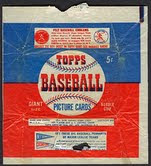 Topps wholesaled their product at 60% of list price, 2% net, so it 's going to work out to be slightly less that 60 % but whatever. BB cards without gum (vending & cello), from what I have been able to determine for later years, would have totaled no more than 10% of production at any time and of course far lower than that for 1952.
If 5% was the "no gum" figure (and remember no one cent or cello packs were issued for the highs and vending is probably non-existent as well, or close to it), they made $840,000 from Baseball card sales in 1952. Even if they did have some vending sales, 5% is a good fudge factor just due to imprecision when a press run was printed, roundig of the figures provided to the FTC, etc. I do think the N/A entries are due to Topps not having the specific breakdowns as they were tracked as part of something that encompassed an entire line, not just baseball.  Anyway...

Then you have to account for production of each series compared to the whole set and I'd estimate that at roughly:

There are some comments I've read over the years that the semi's were printed at 50% of the series before, same with the highs, i.e. half the rate of the semi's. We'll never fully know of course but that seems essentially correct based upon the populations seen today, assuming more high's than semi's are submitted "organically" due to their higher valuations. Not all series had 100 cards either so it's going to be imperfect no matter how you try to figure it but the FTC figures are as as good as we'll ever see for Topps sales figures of the era.

5% of 140 Million is 7 Million Highs.  Divide by 100 and it's 70,000 per card, plus another 70,000 for the DP's: Mantle, Thomson and Jackie Robinson. So maybe 140,000 Mantle cards were printed. Put another way, a full 200 card press sheet (i.e.  two 100 card slits) with that amount of Mantle's would have a production run of 35,000 sheets.  That strikes me as being eminently possible for a single day or two's Topps baseball press run of the time.
If, by some miracle, 40,000 Mantles got dumped by Sy Berger - like I somewhat jokingly estimated last time out - then Topps actually sold a good chunk of the highs, maybe 70% or a little more of them, which doesn't seem too bad and certainly not the disaster Sy Berger asserted.

Feel free to run your own calculations but please check my math too!  And yes, they would have shipped cards to Venezuela by sea I'm sure. I'm highly doubtful there were tugs and barges going to South America back then, so it was likely break-bulk shipped (i.e. pallets lowered into ship's holds by crane). It's an ocean voyage, not inland to boot (or a few miles out to the Atlantic Bight), and so much more dangerous.  It's also not the way you would want to do it due to many stops being needed to refuel, even if theoretically possible.
And just revisiting last week's commentary, here's the other thing-there was a City of New York Dock a block away from Topps HQ with an internal Bush Terminal Railroad connecting to it.  City of New York Docks were/are used for many purposes, one of them being loading of garbage onto barges for disposal. Why would they have needed to use trucks to get the cards to the barge?  The schematic is here if you want to check it out.

Back to it now-the big question is whether or not the Mick's lived on after the CCC fire on March 30, 1975.  I suspect many did but check out these population totals first:

THIS IS MOSTLY ALL MAJOR CONJECTURE HEREAFTER: That's 2,329 Mantles and who knows how many "crack and re-subs" are in there, maybe 15%?  More? That brings it down to about 2,000, maybe less but let's say 2,000. If 140,000 Mantles were printed, and assuming more raw ones exist than are slabbed, then only a small fraction survived, no matter what actually happened out at sea, at the landfill or in the blazing Card Collectors Company warehouse on March 30, 1975. More Mantles get graded of course, compared to say Bobby Thomson, and I doubt my usual WAG of 3x for early 50's raw cards applies to Mickey.  It's possible, given the star power of this sucker, more are graded than not but if it's a 50-50 proposition, there's about 4,000 Mantles out there, or about three percent of the number printed.

Imagine what they would be worth if he wasn't a double print?!

I checked PSA the website they track about 250 sales in the last 2 years of those 1700 cards.