Well more deep diving into my stash of old hobby publication tearsheets has yielded a couple of sets I had long forgotten about.  In fact, they showcase two of the biggest superstars the game ever had.  Yup, Babe Ruth and Ted Williams both got a short and odd treatment from Topps in the 1990's.

"Babe Ruth" was broadcast by NBC TV on October 6, 1991, which was a couple of days before the MLB Playoffs began.  Babe Ruth the card set was produced by Topps for the producer of the movie, Lawrence Lyttle and it seems only 500 sets were printed.  The 11 card set mostly features actors, as one would expect, but there are two noteworthy exceptions.  Pete Rose, two years on from the lifetime ban that derailed his surefire first ballot HOF election, played Ty Cobb: 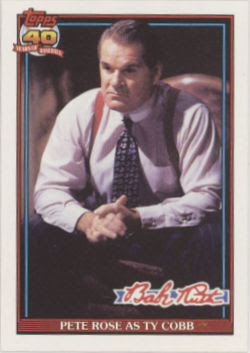 Ironically, Cobb and Tris Speaker (both of whom are certainly in the Hall of Fame) each ended up as teammates on the Philadelphia Athletics in 1928 as a result of a game they had bet on toward the end of the 1919 regular season. Dutch Leonard and Smokey Joe Wood were also in on the action but they had already left the majors by the time the matter came to light in 1926.  American League President Ban Johnson and Tigers owner Frank Navin paid off Leonard, who had damning correspondence implicating all four players, in what sounds like a successful blackmail scheme.

The Commissioner's Office was duly informed toward the end of 1926 and the two players were forced to resign (Cobb as Tigers player-manager with Speaker in the same role for Cleveland).  The scandal was not exactly squashed but it was certainly covered up by Landis, Johnson and Navin.  Cobb and Speaker were both released as well, with Ty going to play for Connie Mack in 1927 while Speaker ended up with the Senators before joining the Athletics for 1928, which was the last active season for both men. Inspired casting, I say!

The set however, does include a Hall of Famer in Rod Carew, who served as the hitting consultant for the movie. 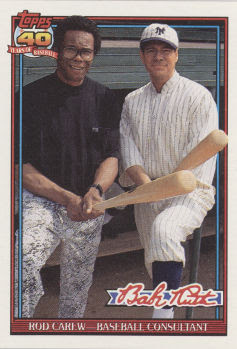 As his write-up noted, Stephen Lang played the Babe: 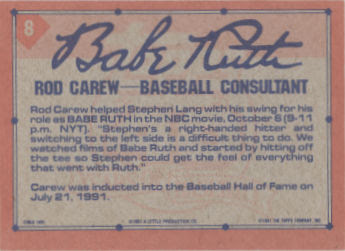 Topps would do things like this on occasion and such sets would have been used as part of a promotional package or even as a thank you to certain people involved with the making of the movie.  The checklist is like so:

Topps got to use their "40 Years of Baseball" logo and the set looks pretty sharp!

As for Ted Williams, when I said short and odd at the beginning of this post, I meant it.  On December 15, 1995, at the dedication of the Ted Williams Tunnel, which connects Logan Airport to the city of Boston (and was part of the infamous "Big Dig"). Williams had been driven through the tunnel as part of the opening ceremonies by the governor of Massachusetts and once they arrived at Fenway Park an invitation-only luncheon was held.  Attendees received a 13 card set sponsored by Boston Sand & Gravel Company as a favor, which featured 12 cards produced by Choice Marketing but also sported a single card made by Topps.

And what a card it was: 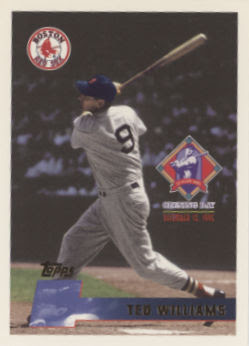 Naturally, it was card #9, although I believe it was used as the "header" for the set: 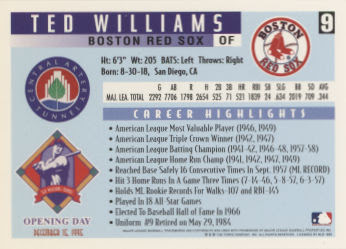 It's reported 3,000 sets were produced and the Williams is definitely easier to find than the cards from the Babe Ruth set. (UPDATE December 9, 2021: Keith Olbermann advises far more than 500 Babe Ruth sets were printed up, likely several thousand).