I've briefly touched upon the esoteric and poorly documented issue known as Magic Funny Fortunes here previously, covering an issue of early 60's vintage (the exact issue date is presently indeterminate but circa 1961) that mimiced the familiar one cent Topps tattoo format of the era. Instead of a tattoo, it had a magic viewer feature; otherwise it's essentially the same thing in terms of packaging, with a small piece of red cello added.  Here's an example:

Classic Jack Davis right there kids! That helps with the timeline for the set too but I'm not here to discuss Magic Funny Fortunes today.  Nope, instead let's take a peek at a successor set, issued inside Bazooka around the time they were running out of Bazooka Joe's in the early 80's. Running out?  Yup-Wesley Morse had created so many of the little strips that Topps used his Joes for almost two decades after the artist had died in 1963 before running out!
With the strip's Howard Cruse redesign still a couple of years off, a number of oddities and recyled ideas, plus flat out reissues, started peppering the Bazooka interior wraps around 1980-82. One of these was a refreshed take on Magic Funny Fortunes.  Take a look at this fortune and compare it to the above image: 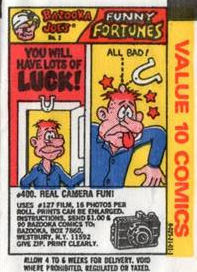 That and the rest of the Funny Fortunes detailed here came via Friend o'the Archive Lonnie Cummins and I assume the punchlines all match those of the vintage Magic Funny Fortunes from the 60's. No Jack Davis? No problem, just get Jay Lynch to come up with some snazzy artwork 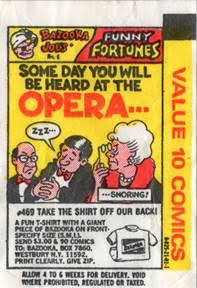 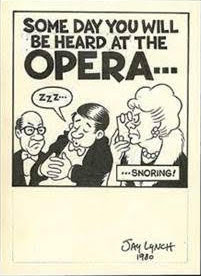 According to a reliable source, Lynch signed all of his work to make sure there was no, um, misattribution; an issue apparently sometimes at Topps.  But wait, there's more: This original has some instructions regarding color (with color ink codes to boot): 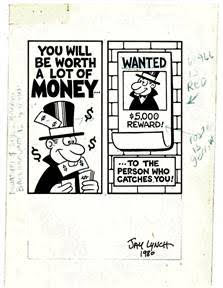 I'm not sure if all of the 1980's Fortunes were taken from the 60's version but it's likely as the gags were already written (and paid for!). Check out this groaner: 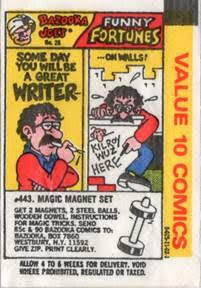 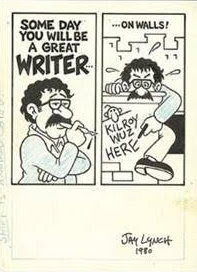 Lonnie has sent over a gaggle of stuff on the "between the Joe's" strips, stay tuned! More Bowman fun is coming too!

Those are actually kind of funny.