Well best laid plans gang aft agley sometimes as I was going to table my look at unissued Bowman card subjects until the MLB offseason (which looks like Thanksgiving almost, sheesh!) but then Friend o'the Archive Keith Olbermann pointed me to a couple of finished paintings that Huggins & Scott recently offered.  These are really neat and colorful, so I'm treating this like a burst of Spring, which I think you will all enjoy.

These are all Phillies subjects and were framed by a collector years ago and apparently not kept out of sunlight for some portion of their time as wall hangings.  Bill "Swish" Nicholson" is up first: 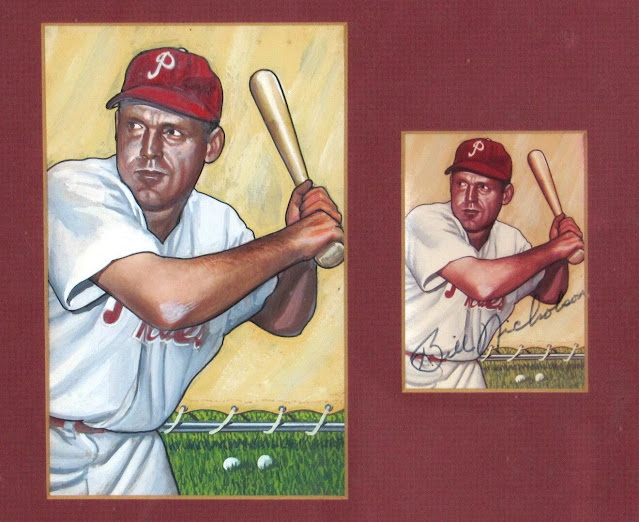 The lot description states the original painting measured 4" x 6" and while that is obviously not an issued card on the right, the 1952 Bowman's measure out at 2 1/16" x 3 1/8".  You can see how the reduction smoothed out the imperfections in the original, which may have had a couple areas ready for retouching (look at the area under the bill of his cap).  The original collector had Nicholson sign his ersatz 52, a nice touch!  Swish was a third series card for Topps in 1952 who appeared in the 1950 and '51 Bowman sets and then returned in Black-and-White in 1953. It seems he was deemed Topps property for 1952.

Nicholson's story is fairly well-known and he made his mark as a Cub, especially during the World War 2 years. He got his nickname in Brooklyn as a result of practice swings while stepping to the plate and while today he may be recalled as a power hitter who struck out a lot, that wasn't really the case.  He was a solid ballplayer, with four All Star appearances and he received National League MVP votes in five consecutive seasons, finished third in 1943 and second in 1944. He lost his mojo after that and ended up with the Phillies for his last five seasons, bowing out after 1953. He was a Whiz Kid in 1950 but missed the final month or so of the season and postseason after being diagnosed with diabetes.

Less well known is Lou Possehl, a pitcher who put in very small parts of five seasons over seven years with the Phillies. He wasn't very good in the minors either and looks to have had high walk but middling strikeout counts.  He never actually appeared on a Bowman or Topps card, so his artwork was likely prepared as a hedge against setbacks in litigation with Topps, since neither his 1951 (2 games, 6.00 ERA) nor 1952 stats (4 games, 4.97 ERA) seem to have warranted inclusion by Bowman. 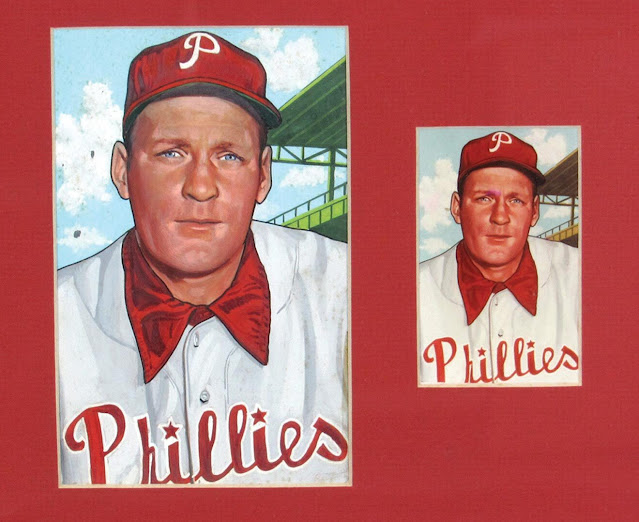 There was one issued artwork in the auction too, Granville "Granny" Hamner: 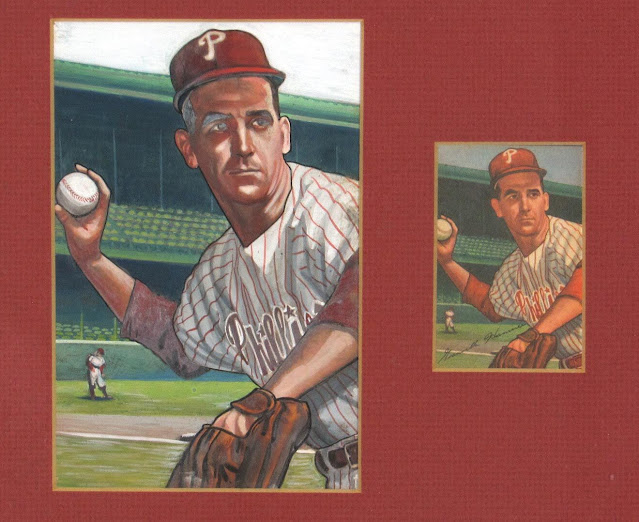 If you look closely, some retouching must have been done after the larger painting was completed.

Hamner had a very long career with the Phillies (1944-59) although he bounced up and down until sticking for good in 1948 and was a key member of their 1950 NL pennant winning team as their starting Shortstop. He almost ended his career in Cleveland during the latter half of the 1959 season when, oddly enough, he was trying to convert himself into a pitcher.  Indeed,  he returned in that fashion for three games with Kansas City in 1962 after three years in the minors as a two-way player. A fan favorite, he had some real issues with his teammates and management over the years he played in Philadelphia, although he eventually made his way back to the Phillies organization in various roles.