There's been several concerted efforts these past two or three years by some intrepid researchers over at Net54 Baseball trying to piece together various uncut sheets arrays for Topps series' where short prints either reside or are thought to.  I chime in on these threads sometimes and there's been some impressive debunking of various SP and DP theories as a result of a kind of crowdsourced look at miscuts and sheet remnants.  Since my interest in off-the-beaten-path Topps stuff started with trying to decipher the 1967 high number SP's four decades(!) ago, I love following these discussions.

The 1967 highs have been pretty much put to rest in terms of SP and DP rows and I'll get into that next time out as I've not posted anything on what I hope and believe are the final findings, but today I want to look at the 1967 semi-highs.  These span nos. 458 to 533 and include eight Hall-of-Famers. Like the high numbers in 1967, it's a 77 card series, which seems to be a magic number for Topps tomfoolery. Of particular note is the long held impression in the hobby that card #476 of Tony Perez was short printed, often the only one from the series identified as such in the guides.  A single SP in a full series is a rare thing with Topps and it implies the "broke the pattern" for some reason.  Before eBay and the internet, it was hard to prove or disprove such things.  Not so anymore.

You can pretty much assume, with a couple of exceptions, that any standard sized Baseball sets (2 1/2" x 3 1/2")  issued by Topps in series will not have short or double prints if the series count was 66 or 88.  The former gives you four impressions of each subject across a full 264 card uncut sheet, the latter three. Outside of those two, the only other series that is an even number is 110 , which Topps used to lead off the first every year from 1958-69, although once they started printing checklists as discrete cards (1961), those series run only 109 cards, with a preview checklist covering the next series tipped in. Those generally result in 44 (or 43 with the extra checklist added) over prints (vs. a more unwieldy-to-describe 88 - or 87 - short prints) in the series as the first wave in most years was produced in massive quantities, which seems to smooth out the press run.  Rule of thumb: if it's not detectable in the pricing, then there aren't short prints in the abstract sense, as there were too many cards produced in the series to matter.

That's 20 distinct 77 card series!  I'll try not to step on all the work done over at Net54 so am limiting the discussion here to 1967.  I ran the semi-highs through an eBay search on June 13th and came up with this:

I designated the two World Series teams from 1967 (Cardinals and Red Sox), Hall-of Famers and Yankees to make sure to weed them out if they had weirdly high counts.  I wanted to see if the semi-highs were as strange as the highs when it comes to double printed and short printed rows.

It sure seems like the Coombs, McFarlane, Dodgers Team, Rigney, Hicks and Martinez should be in a "super print" row based on eBay's listings, while Palmer as a HOF skews some numbers in the Merritt/Santiago row it's been determined he resides in.  Palmer is really popular to grade for some reason and I don't think there is a true super-print row in the semi's based on his positioning and counts I will show below.  I still suspect the 67 highs had a production issue that really changed two planned row counts but believe the semi's were not similarly affected. I say this because of the PSA populations.

If you take the HOF'ers out for a minute, the top 11 counts from eBay are (with eBay to the left, PSA pops to the right):

The Dodgers Team probably skews high due to Koufax being in the team picture. 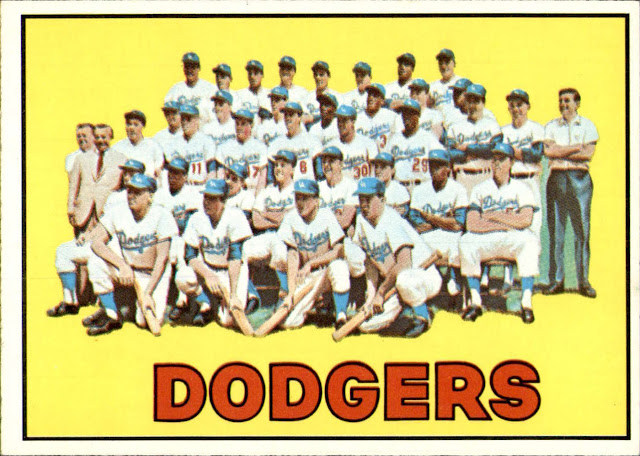 But based upon research over at Net54baseball.com Hicks (91 eBay hits) is in a row with Menke (60) and Talbot (50), whose PSA pops are: 245, 253 and 279 respectively.  That is a major eBay disparity on Hicks, like Palmer.  Maybe there's commons that are so lowly literally nobody buys them?

Conversely, the lowest 11 counts are, with PSA pops to the right:

I think this relative smoothness among the two sets of counts means that 33 x 4 and 44 x 3 is the likely row setup for the semi's then over the 264 card press sheet array.  Nothing really jumps out when you look at PSA's figures.