No, not Atlantic City, where I opted out of this year's National Sports Collectors Convention but rather the American Card Catalog. Jefferson Burdick's groundbreaking and indispensable guide to the hobby of collecting trading cards and other similar items, first published in 1939 as The United States Card Collectors Catalog (USCCC) and intended to be updated and reissued every seven years.  Burdick started writing about the guide in 1938 in the Card Collectors Bulletin (CCB), his early hobby publication, in the mid 1930's after using the 'zine as a resource for set checklists, finds and other hobby news since early 1937, after branching out from a couple of years of similar content in a column run by Hobbies magazine. The mid-30's were essentially the start of what we now refer to as the organized hobby, although it would be several decades before it really got going and identifiable dealers came into the fray.

Loose-leafed for 1939, the USCCC was designed to allow the insertion of annual updates, which were issued through 1942 (with a scant one-pager in 1943) until the war precluded any additional leaves being sold in 1944 or 1945. While bareboned and lacking individual checklists, the catalog was still the most relaible (and essentially only) guide available and started the classification system many old time (and some newer) hobbyists still use. In addition, it had rudimentary pricing, another valuable feature. George Vrechek has written an excellent overview of all this, and many other Burdick related subjects over at the Old Baseball site, which I urge you to read if this at all interests you. 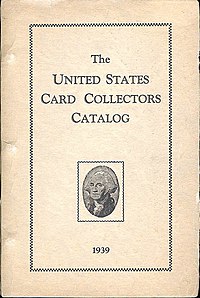 Note the punch holes.  The Card Collectors Bulletins could also be inserted into the book as Burdick issued them with holes punched out.

In 1946, renamed and mostly rewritten with letters added to what was strictly a numbering scheme prior, a staple-bound soft cover American Card Catalog was offered by Burdick without an option to add updates directly to the book; you can see bits and pieces of it over at Net54baseball, where David Kathman has written and posted extensively on this volume. The 1939 book and to a slightly lesser degree the 1946 are very collectible and can bring some big prices, the former being printed in edition of only 500 and apparently not selling through until 1945. Here she is, courtesy of REA: 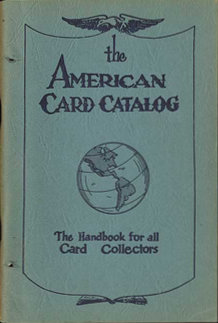 I believe those holes were punched "after market" as Burdick had major issues getting the books punched originally. The fasteners must have done a number on things as well.

This was followed by a more robust ACC in in 1953, that featured Woody Gelman as one of its editors then a 1956, hard-to-find reprint, likely created to raise some additional cash and update the buy and sell ads in the back of the book.   This is the 1953 cover: 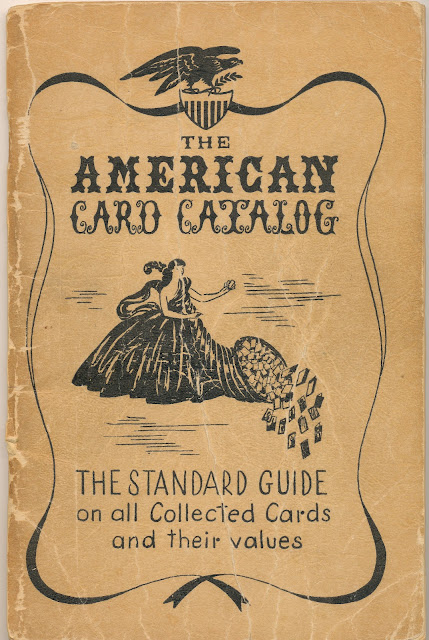 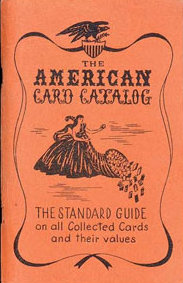 (Courtesy REA)
And this the 1960, the final, updated ACC, in hardback: 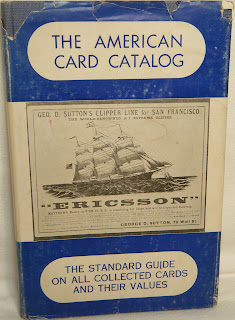 Burdick had by then turned over the tracking of updates to Buck Barker, who published regular and extensive updates in the CCB after this book came out, as he worked on mounting his massive collection for the Metropolitan Museum of Art in New York City. Burdick died in 1963 and Gelman was supposed to issue a 1967 guide with updated information but despite Barker's massive efforts at cataloguing the tsunami of issues that had been unleashed since the mid 50's, it didn't come out, for reasons that have never been determined.

Gelman did put out a soft cover, reprinted 1960 edition though in '67 and with, I think, new ads: 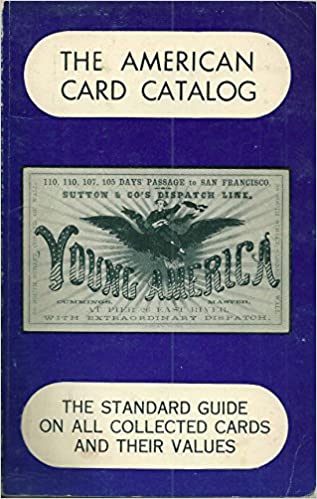 Barker's updates continued until early 1972 and thankfully were collected in a hard-to-find, authorized  pamphlet issued by Chris Benjamin in 1990 (some were assembled in a similar, likely bootleg, fashion by Ed Broder in the early 70's): 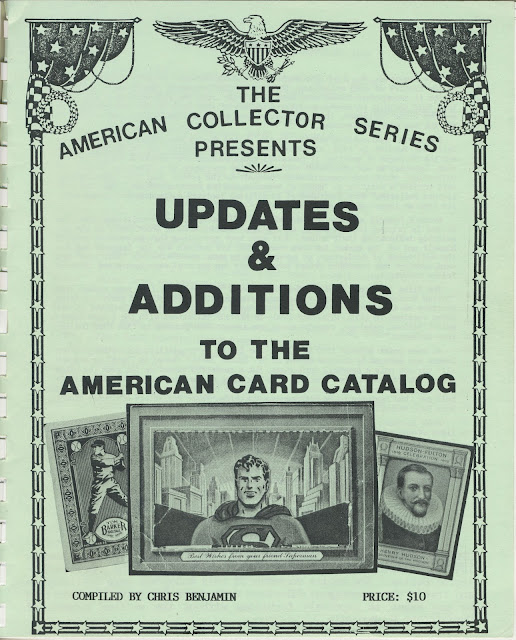 Barker attempted to revamp the listings for some of the more current issues toward the end of the Sixties but without a full book, this innovative attempt at revision never took within the hobby, but the Catalog was always a metamorphic; some classifications were revised every seven years and a chunk of the ones we know today, especially for Topps and Bowman, were only locked in via the 1960 book.  Reissues of the 1960 guide were put out by Richard Gelman via Woody's old Nostalgia Press imprint in 1988 and again a year later (and/or possibly a year earlier as I can't cipher it right now) as Card Collectors Company used the ad space in back for their current catalog .  Here's my 1988, which I use all the time: 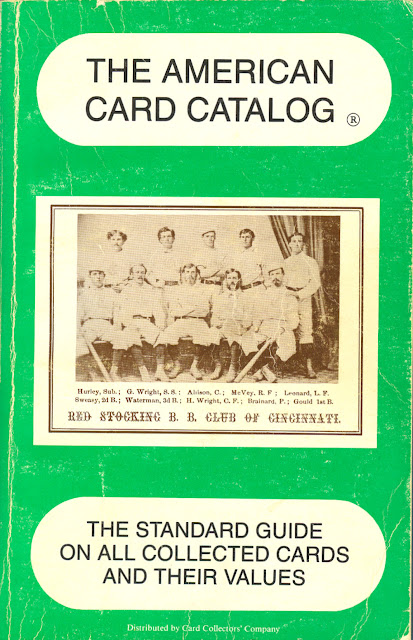 There's a nice Woody Gelman connection here but the classification changes are my real quarry.  I'll be looking at the progression of the Topps and Bowman issues from 1953 and through Buck Barker's updates next time out.