Wrapping It All Up

Those pesky B&W 1960's Topps issues just won't go away. No sooner do I scatter blogs on this subject throughout the last month like Hansel & Gretel at a 4C convention, than Les Davis and Kurt Kursteiner et al come up with a killer article in The Wrapper #240 tying up the loose ends. Well played Gents, well played! 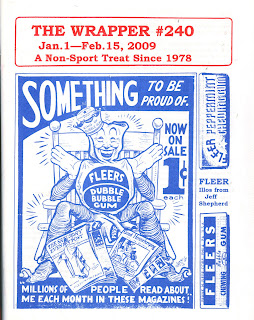 In addition, the current issue features some crazy Fleer confectionery items from Jeff Shepherd's collection (this blog would be half blank if not for Jeff's killer scans) and about a kazillion other essential non-sport articles and ads. You all need to send send Les Davis $23 (plus some orphaned postage stamps) and get with the program. 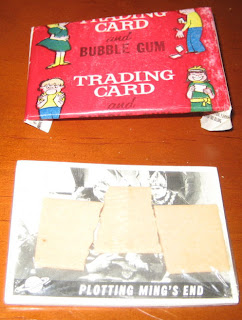 discussed here, have been shown to have also appeared in Topps baseball boxes in addition to Fun Packs; Bob Marks noted in The Wrapper #124 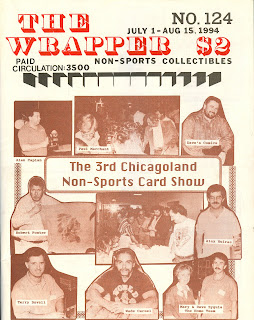 that four such boxes at 120 cards per box had been found in 1984, in the first known instance of a double wrapped Topps trading card product. I would say at most two or three additional boxes worth have been found over the years, so the total number of Flash Gordon cards out there could be in the 720 - 840 range. However, that count may include an empty box so the number could be less than 600. In my experience, if there is a population of under 1000 cards total for a 60's or 70's test set, then there is extreme competition among collectors for them and they bring prices in the $150-$200 range for singles when they pop up for sale or auction.

In theory this would yield around twenty or thirty 24 card sets, but card # 24 seems to be in short supply, as do nos. 6, 10 and 11, especially the latter two. I would be shocked if more than a half dozen complete sets exist in the hobby as a result of the distribution of the short prints among the known cards. This is not unheard of - the 1971 Bobby Sherman Gettin' Together set has the same collation problems, although it seems to be available in about triple the supply of the Flash Gordon cards.

The bizarre manner in which these Flash Gordon cards entered the hobby seems to smack of Woody Gelman funneling items to his trailblazing card dealership, the Card Collectors Company 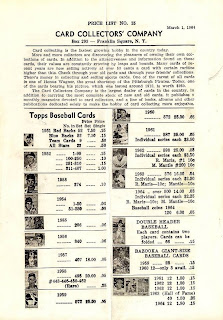 which had an offshoot called Nostalgia Press that handily reissued the American Card Catalog among other things. From what I can gather, once Topps sold the retail product, the rewrapped product, the Fun Packs and whatever other channeled discount blowout they could muster, Woody Gelman took control of the detritus and sold it to the far flung hobbyists of yore. That is our blessing and our curse.

Card Collectors Company sustained a fire in the early 1970's that destroyed part of their warehouse and consumed much precious inventory while creating some legendary scarcities within the Topps oddball canon. That story will be told another day.

One of the Flash Gordon rewraps just showed up on the bay. If I had not been laid off two months ago, I might have took a pop at it.