In 1967 Topps issued an expansive (and currently expensive) set of interactive cards commonly referred to as Punchouts. 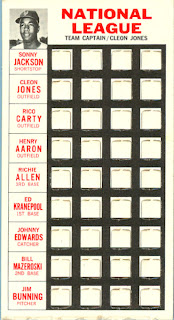 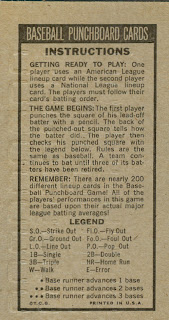 The design is based upon the myriad punchboards found in drug stores and saloons in the early part of the 20th Century and like so many things at Topps issued throughout the 50’s and 60’s , they may have been a recreation of Woody Gelman and Sy Berger’s boyhood totems. Sold, according to legend, in the area the 67’s are found infrequently today, although I would put them in the “scarce” and not “rare” category.

There are numerous subtleties to both the nuances of Gelman and Berger's adolescent memories and the 1967 Punchouts, which will be set aside for another day. Today, I want to explore the set’s predecessor, the 1966 Punchout Proofs.

While the Standard Catalog indicates the 1966 flavored Punchouts were test issued, I have serious doubts it ever got that that far. At present, there are nine known panels of two conjoined Punchouts:

(from 2009 Standard Catalog of Baseball Cards)

Apparently, Mastronet sold a Mays panel (with unknown opponent) about ten years ago but I am still trying to confirm that. Here are all of the scans I have been able to find (how I wish one were mine, all mine): 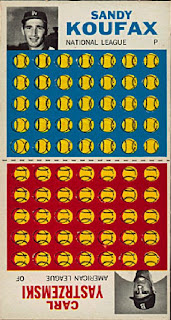 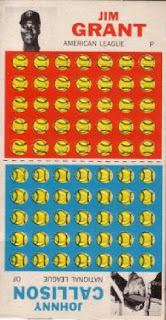 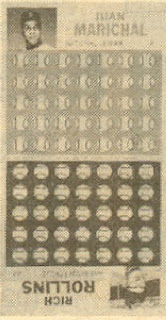 The Roseboro/Richardson panel was once Woody Gelman’s! These were not even checklisted until a few years ago. I do not believe more than one of any example is known but a couple of duplicates would not surprise me. For this reason I think the cards were only proofed; even test issues exist in greater quantities than what is known for these guys.

The panels were “tallboy” size (about 2 ½” x 4 ¾”) and obviously designed to be separated so two kids could play baseball with them. I have never seen the reverse of a 66 Punchout but presume they carry instructions like the 67’s.

Mickey Mantle is pictured on the box proof but I have never seen a wrapper design. 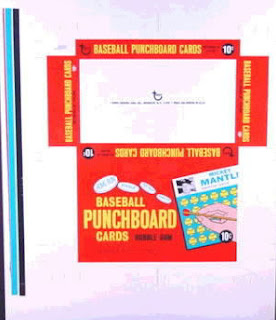 I hate to talk money, but the Koufax/Yaz panel sold at auction about five years ago for close to $7,000. Considering the rarity of these, I think that is low today, even in our imperiled economy.

Thanks for showcasing another great rarely seen Topps issue.

FYI
The other player on the Willie Mays card is Tony Conigliaro... if your interested in seeing an image of it please let me know where I can forward it to.

I will have an update on this set soon-there have been a number of new discoveries.