The Deckle is in the Details

When I posted at the end of May on the 1969 Topps Deckles, I figured it would be a pretty innocuous piece and for the most part I was correct. What I didn't realize at the time though, was that there was a pattern to how the cards were originally ordered, thanks to an e-mail from friend o' the archive Duke, who alerted me to the reasoning behind the two pulled cards and their corresponding replacements.

Wilhelm had actually changed teams when the yet-to-play-a-game Royals packed him off to the Angels on December 12, 1968. This left a hole that was made bigger by the the corresponding trade of Rusty Staub from Houston to Montreal early in the New Year as Topps was including players from the two dozen ML teams in '69.

Now, as you can see from the checklist below, the set was originally ordered by AL teams and then NL teams, alphabetically by city. But when Wilhelm and Staub were pulled, Wynn and Foy were placed out of sequence. Here look:


I'd say the Cardinals got short shrift and the Giants made out pretty well but the disruption of the alphabetical sequences is odd. Nonetheless, here's the deckle of Willie Mays, in a classic pose I have always liked: 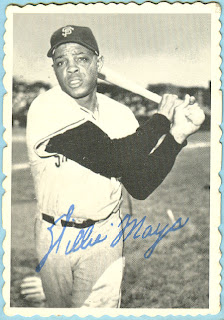 I'll be more alert when discerning the patterns within patterns Topps was creating in my future endeavors.
Posted by toppcat at 7:34 PM

It's strange that Topps was so concerned about the teams, and arranged the cards by teams, but did not put the team name on the card anywhere!

Very interesting.. I always wondered. Thanks for posting!

Great research! Thanks for the great information.

Yes, the team concept seems to have been very import to Topps 40 years ago. They did the same thing with other insert sets of the era, such as the stratch-off and the team booklets.