Well, the set that will not go away returns! Yes, every time I scan my respective in-boxes, new details emerge on the 1971 Topps Winners.

Collector Doug Goodman was kind enough to send along some scans to top off the visual checklist of known cards, which remains at fifteen. Here is Jeff Hooper: 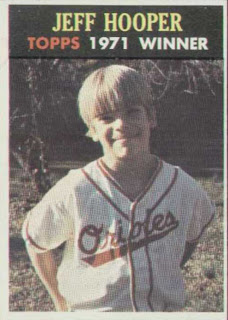 And here is Darren K. Lazzari: 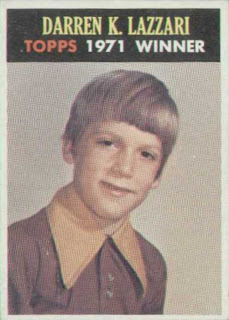 There is a twist this time though-another collector (let's call him Bill Mullins) did some ace detective work and found a newspaper article about Master Lazzari. This is from the Valley Advertiser of May 3, 1972 which served Monessen, Pennsylvania at the time. Monessen is a Pittsburgh suburb so we are zeroing in on one pocket of sweepstakes distribution.

As the article states Darren was "happily passing the cards out to his school chums" and "packages with his picture will be appearing in stores throughout the country" it would appear that while the Winners were from 1971 they were distributed within 1972 Topps baseball packs. It also seems possible they had national distribution but I have to wonder if that was limited to the two or three areas the contest seems to have been held.

Other nuggets in the article indicate Darren received 1000 copies of his card and a carton of bubble gum containing packs of 10 regular issue baseball cards plus one of his. This ties in with the recollections of the Bole girls in my earlier posts. The fact that these were inserts in baseball card packs makes them a bit of a different beast than just a contest card.

More as it happens!
Posted by toppcat at 6:48 PM