I managed to sneak a post in on some soccer stickers last time out instead of finishing my look at the 1952 Topps high numbers. So it goes on a lazy three day weekend.....plus I had a chance to think it out a little more.

I found an interview with Sy Berger where he indicated the 1952 highs were definitely a last minute effort, which I think supports my theory they had pictures already in hand from the 1951 season for all the players to appear in the 1952 set. I also consider that the high numbers should have totaled 100 cards in number as all prior series were divisible by 10 when counting subjects.

In fact, from 1952-56, which covers their entire span of Giant Sized cards, the evidence is compelling that Topps always planned each baseball series to be divisible by 10. That applies to any issued Giant Sized set in that span the more I think about it, not just baseball. I'm sure Sy Berger could have scraped up three more players considering the selections that made the cut for the 97 issued subjects, so it seems highly probable outside forces intervened. So who else could have been in, then out? Here are three viable candidates: 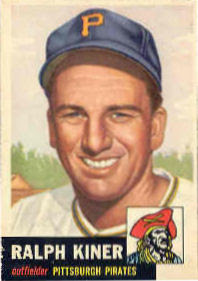 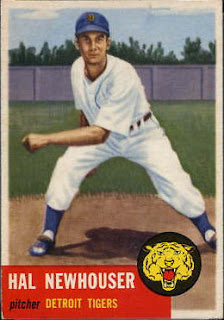 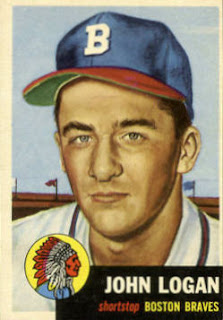 Well, Ralph Kiner fits the bill. He was in two 1951 Topps sets (Major League All Stars and Red Backs) and in 1953 would appear on both a Topps and Bowman card, so he is a ripe candidate to my mind as he may not have been a Bowman exclusive.

Hal Newhouser is also a good possibility. He did not have a great 1951 season but bounced back in 1952 and would certainly have been a guy with a mug shot or two lying around. He never was on a Bowman card and was a well known name.

Johnny Logan is another potential future garbage scow candidate. Logan had a decent 1951 rookie season for the Boston Braves and looks like he was on the roster all year so unless he missed picture day on any the Braves half dozen or so visits to New York City that year, he should have been a guy with a photo on file. He has a rookie card in the 1953 Topps set and in '54 was on both Topps and Bowman cards and given Bowman's propensity to only issue cards of proven players in 1952 (starters mostly) would have been a good choice for Topps as he does not seem like a Bowman exclusive.

Now, if Bowman was not able to contest these three players, perhaps they were involved with some kind of local promotion that precluded their appearing in the 1952 Topps high numbers. I would think that more of a possibility with Kiner than the other two but who knows?
Posted by toppcat at 5:16 PM