One of the things that occupy my idle thoughts are uncut Topps sheets. I guess it's kind of like a mental default setting that dials to "Topps" and not "blank" but I'll leave that for my psychotherapy sessions down the road. Last night then, my mind turned to the 1952 high number half sheet. Famously, it contains three double prints, one each from the Yankees, Dodgers and Giants, the "hometown" teams for Topps (even though the Shorin's were Dodgers fans), consecutively numbered as 311, 312 and 313 and giving them a real solid launch for the high numbers: 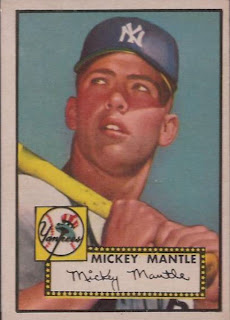 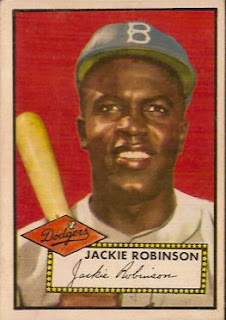 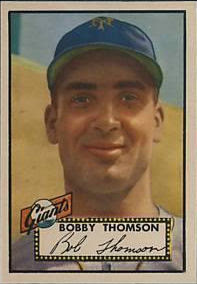 I have posted only a little about this sheet here and like all other known 1952 sheets, consists of reconstructed quadrants, one of which is still inferred. This schematic from the 3rd edition of the Sport Americana Baseball Card Price Guide will show you the two possibilities regarding setup of the high number sheet (there would have been another sheet, theoretically identical to this one forming the other half sheet), the lower left quadrant is the one that remains a mystery: 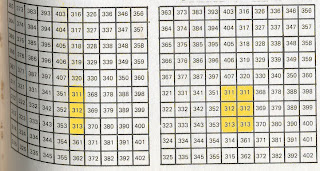 My Corel Paint Shop program is not letting me color in the double prints on the left edge of the left schematic but they are five columns over, hard on the border, in the same rows as the highlighted ones. I plan to look at the differences between the double prints shortly but today am contemplating which three players could have been pulled as it would seem highly probable that the set was to have been complete at 410 cards and not 407.

Topps had won their initial legal skirmish in 1951 with Bowman over players selected for baseball cards after a less than stellar debut that year, as we all know. With the departure of Warren Bowman from his namesake company in the spring of 1951 Topps would have been empowered to go after Bowman full tilt in 1952 with their broad player selection and Giant Size cards. Bowman though, was not without their own legal beagles and may have had three players under contract that Topps had intended to include with the high numbers (or, more properly, second series as it was commonly referred to at the time) but were forced to pull. We can eliminate rookies who debuted in 1952 as there would not have been any photos available for Topps and players exclusive to Bowman at the time (big stars usually). So who then?

One thought that occurs to me is that one player apiece from the hometown teams were originally slated to appear in the slots duplicated on the sheet. The nameplates used on the three DP's seem even more slapdash than the ones on the non-DP cards and while I am assuming they would have had the team logos already in place, it's an educated assumption. The question then is, which players were pulled? A couple of obvious candidates, Carl Furillo and Casey Stengel were Bowman exclusives until Topps bought their main competitor in 1956 so they are out, as is Sal Maglie for the same reason. Vic Raschi? Bowman all the way. OK, time to narrow things down starting with the Yankees.

Whitey Ford seems like a good candidate as he was in the '51 Bowman set, then nowhere at all in '52 before resurfacing with Topps in '53. If there was no Topps or Bowman card for Ford in 1952 then he seems like a player whose contract was either being litigated. However, he was in the military during the 1951 and 1952 seasons so he's probably not our missing Bronx Bomber. Topps stretched their player rosters but not for a guy who had missed the year prior and was slated to be out in '52, although there is precedent as Joe Page did not pitch at all in 1951 (or '52 for that matter). So we look to the season roster.

A few guys are not on any '52 cards; Jim McDonald, Jim Brideweser and Bob Cerv all saw limited action with the Yanks in '52, with Cerv leading the way with 12 games played. But Cerv's rookie card is in 1953 (Topps) so he's probably not our guy, the others only played a couple of games. Charlie Keller looked promising but he was released by the Tigers very late in 1951 and the Yankees did not pick him up again until September 1952, so it's not ol' King Kong. That pretty much leaves us with Art Schallock, who debuted in July of 1951 and had a solid half year on the mound for the Yanks.

The Dodgers, after you eliminate Furillo (who was the only Dodger in '52 to be a Bowman exclusive from what I can see, with the possible exception of Don Newcombe) and all the rookies who debuted that year, had two guys (Joe Landrum and Steve Lembo) who did not play in '51 but debuted in 1950 and had their last season in 1952. They are certainly possibilities as was Don Newcombe, who appeared with Bowman commencing in 1950 then was theirs exclusively excluding his absence in 1953 due to military service but could have been a ripe candidate to be poached. Still, he feels like a Bowman exclusive when you look at it a little.

Nobody else who played for Brooklyn in 1952 fits the bill and Topps had already included four coaches, three guys who did not play at all for the Bums in '52 and another player who was in the military to stretch things out so it could have been either Lembo or Landrum. I am going to go with Landrum, based upon his stellar prep career and despite the fact he served in the military for 1951, as Lembo was sent down for the 1952 season, playing in Fort Worth. If you click the Landrum link above, you will see the guy was considered a stud in '52.

As for our missing Giant, again after eliminating the rookies we have some candidates. The one guy who I am sure Topps would have loved to depict on cardboard, Roger Bowman did not get a card at all until 1955 when he appeared on his namesake brand, so I say no to him. George Bamberger pitched two really lousy games at the end of his rookie season in 1951 so no to him too. Ray Noble is a possibility as the catcher had a solid rookie season in '51 and was in the '51 Bowman set and '52 Berk-Ross set (Berk-Ross is a dark horse for contract exclusivity). After that, there's really nobody so I will go with Noble.

So were Art Schallock (#408), Joe Landrum (#409) and Ray Noble (#410) the three missing players? For Topps, those were exactly the types of players they filled out the high numbers with but they are obviously not in the set. So what happened? Well, darned if I can figure it out but I think it eliminates the possibility of the three missing players being from the hometown NYC teams.

One other non-NY possibility is someone from the White Sox as there are none at all in the high numbers I 'll take a closer look at some other possibilities next time.
Posted by toppcat at 7:32 AM

I've never considered whether there may have been "missing" players from the set since it was so much larger than any gum set that had come before it. Since there were a large number of coaches and rookies, I'd always assumed it was the "scraping the bottom of the barrel," so to speak.

However, I simply assumed that the reason the three cards were repeated...was because they needed three cards to fill out the sheet and Topps just went with the first three cards of the series. Not that I have any other knowledge of the printing process.

On a related note...supply and demand being what they are, how much more do you think the Mantle and Robinson cards might be worth today if there were only half of them around?

Intriguing! I like the detective work and possibilities, even if we'll never know for sure...