We saw last time how Topps used a paper envelope wrapper to market two test sets from the 1968-69 era. This was not the first time they had done this and it was way back around 1956 when they tried for the first time to use a paper wrapper.

Round-Up (more properly Western Round-Up but no matter) was one of the last, if not the last Topps set to be issued in Giant Size.  A paper wrapper exists, although for what purpose is hard to say as it does not seem like it would have been an ideal way to keep the gum sanitary.  The set's penny wrapper is far more common and it was also sold in what Chris Benjamin has described as five cent "layered" cello packs so there may have been some experimentation going on with the nickel packaging. It appears a piece of tape (see left border) may have held the pack together. 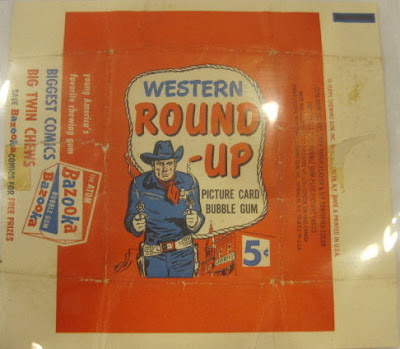 The other 1956 paper wrapper is from Flags of the World, which also got the envelope treatment a dozen years later.  I can only locate a scan from the same Bob and Jeff Marks article from The Wrapper #92 that featured the envelope version as well: 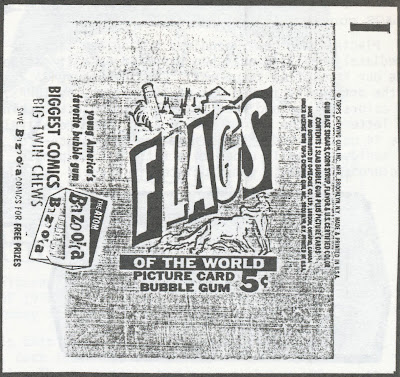 (Update 1/4/18-The above is a Canadian wrapper, I missed it on the indicia originally. More to come on these sets semi-shortly.)

Other wrappers from other sets could also exist as these are very rare.  If anyone has further background, I would love to hear it.
Posted by toppcat at 3:05 PM

Email ThisBlogThis!Share to TwitterShare to FacebookShare to Pinterest
Labels: 1956 Topps Flags of the World, 1956 Topps Roundup