Who Ya Callin' Short?!

The earliest piece of true hobby research I ever pulled off was in the early 1980's, when I sussed out a black & white picture in an old hobby magazine of a 1967 Topps high number sheet.  I did this because the accompanying article mentioned it showed the Brooks Robinson card (at the time thought of as the ne plus ultra of all short prints) as a double print on the sheet.  Well, I thought to myself, that's odd, and then with the help of a magnifying glass and a team checklist book, pieced together all 132 cards on the sheet and then typed it all up (yes, on an ancient device called a typewriter) and tucked my schematic away.  I am glad I did that as I lost the original picture sometime later, although I have since found other examples of it, like so: 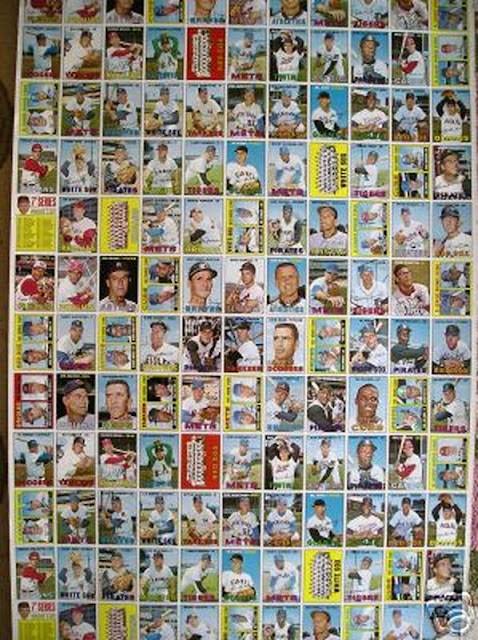 That is described as the "B" sheet, which means it was on the right side of the full 264 card sheet; the "A" sheet would have been to the left, although I think they were actually printed in a horizontal orientation.  Pay attention now, there will be a quiz at the end and you will have to use math! After years of relative stability in their printing patterns, Topps started mucking around with things in 1967 (Edit 5/29/19-looks like starting in 1965). Counting from 1961, the first year of expansion in baseball, their set lengths were 587, 598, 576, 587, 598, 598 again (1966), then 609, before dropping back to 598 in 1968, the final year before another MLB expansion would occur and set sizes would grow beyond anything ever seen before.

Topps also had consistently printed additional cards on each press sheet when compared to the checklist cards in this period, thereby giving the purchaser some cards from the next series plus the checklist card for the following series (in what was technically the prior series pack) and ensnaring their young consumers in a ceaseless march to the last series of the year where the extra cards and checklists would elegantly resolve.  But in 1967 they changed how they did this and also went over the 600 mark for some reason, which is not entirely clear and was not supported by their being more teams or players. The was also a distribution problem with the 1967 high numbers and many locales did not receive them, especially west of the Mississippi River. Add it all up and you have a recipe for scarcity.

Now, getting back to the uncut high number sheet.  While the above scan is truncated at top and bottom, if you count the descending rows and use DP for double print and SP for single print, you can label them as: DP1, DP2, DP3, DP4, DP5, DP1, SP1, SP2, DP2, DP3, DP4, DP5. The odd placement of the two SP rows has always caught my eye and led me to think something was afoot but eventually I forgot about this happenstance.

Well we have to jump ahead a few years, to when I found a list of 1967 high number DP's in The SCD/Standard Catalog of Baseball Cards. They had DP's where I had SP's.  I then checked one of the Beckett books and found their list did not mesh with mine either.  I e-mailed Beckett and got a response that their DP listings had been created by direct observation of a (possibly partial) uncut sheet.  The source of SCD's listing was never revealed to me but it seems now it was based upon tabulation data and not an uncut sheet.  It was clear though that Beckett had access to a sheet that was different than the one I had sketched out.  So I created a spreadsheet to show all the possibilities and came up with something quite interesting:

The 7th series checklist also appeared on the 6th series press sheet, so is more abundant in theory than any other 7th series card but we'll treat it as a true high for our exercise here today.  If you look at the data you will see that 11 cards identified as short prints have no corresponding DP designator from either SCD or Beckett.  Logically, these 11 cards are the true 1967 high number short prints and they are all from the row I call SP2:

Conversely, 11 cards that are in my SP1 row are Double Prints on both the SCD and Beckett lists (I suspect #601 Bryan, a Yankee, was left off the SCD list inadvertently):

Then there is the curious case of the 11 cards shown as DP's in the other two lists and also on my sheet:

A nice, neat 11 cards and all appearing in the row I have dubbed DP1. The next three rows (DP2, DP3, DP4) are not designated by either price guide but I have them as DP's.  Beckett, if using a partial sheet, may not have caught these and SCD just doesn't mention them.  I have them all as DP rows in order to make the Beckett sheet work,

Did you notice all three of these "odd" rows (DP1, SP1, DP2) appear as a single grouping on my sheet? Let's replicate them at the top of a theoretical second sheet:

Still, what of Brooks Robinson? SCD has him as an SP and the old thoughts on Brooks were based upon a vending box hoard's yield many years ago that was shy on Brooksie's.  If we presume his row (DP5 on my sheet) was not a DP row on the "Beckett" sheet, we can extrapolate the rest of the sheet:

Maybe not in that exact order and not ironclad until the second sheet turns up but the math works. This gives a final tally that you can check yourselves, of:


My SP rows would not have been known by Beckett, so there are now 24 rows present and accounted for!  It may be disproven someday but right now I'm sticking with it.  As for the promised quiz-see if you can rearrange the theoretical second sheet to match what Beckett would have seen on a partial while still maintaining consistency with the list of SP's and DP's in the full 7th series list above and then have it prove out over 24 rows.
Posted by toppcat at 11:53 AM

Great work, as usual! Wish I had time to tackle the sheet rearranging. :-)

And that Mickey Stanley card...brr. He's a tough gent to track down.

Fascinating research, and I am also greatly interested in the sheet layouts. Recall Rich Klein formerly of beckett commented that they did indeed have access to a sheet.

What I don't get is why would beckett report DP for only 22 of the cards? Given your proposed layout of the beckett sheet, (and i don't disagree with it) i would expect them to say that there would have been DP on every card on DP1, DP2, DP3, DP4, and SP1, with single prints for SP2 and DP5.

At that timeframe (late 70s/80s) did we/they yet realize that A and B sheets were different? I think we can assume they did not know this since they would base their DP monikers based on evidence from a single sheet.

The only explanation that makes sense is they only had a partial sheet and that partial sheet must have shown 2 rows for SP1 and DP1, and just some other rows, but not enough of a full sheet to show the dupe rows for DP2,3,4.

Their partial may have shown dp5 or sp2, but not enough of a sheet for them to know that they were truly short printed.

Hi, Dave from Dave's Vintage Baseball cards, and we carry hundreds of these hi numbers.
So my confusing question would be, if/is there a "a" sheet that we have not seen and it has different rows or number of rows of the high numbers, how could you determine what the short prints are without access to both sheets?
This could explain why one company could call something a short print or double print in contrast to your sheet. Certainly some cards seem to be very difficult to obtain, but without seeing the entire 264 card layout how can you officially label anything single or double printed?

Thank you for providing so much information on these hard-to-find cards. Are you saying rows DP5 and SP1 are actually 1.5 prints? What card numbers are in DP5?

This is Rich Klein, not only did we have access to a sheet at Beckett, but in my dealing days I dealt with a ton of 67 Hi #'s

For whatever reason, the cards Beckett listed as a DP were always easily available and I could never sell them unlike most of the rest of the 67's.

Cards such as Vada Pinson,,,,, were also 11-22 cards that so many dealers would advertise tons available for sale.

I think we can continue learning about these cards but I'd wager that if you asked any dealers with a 67 Hi # stock, the cards Beckett lists as DP is what they have overages of in stock.

Rich-thanks for commenting. If you had DP's on the "Beckett" sheet and the other sheet (let's call it the "blog" sheet) had corresponding SP's, then that is a minimum of three appearances over the two sheets for the cards in the SP1 row on the blog sheet. The Pinson row (DP1 on the blog sheet) has the 11 cards Beckett and SCD have as DP's without any corresponding SP on the other sheet, so four appearances for that row over both sheets would certainly produce an abundance of cards. Still, there seems to be some other interplay at work. I don't suppose any of the Beckett sheet rows appeared three times? That would help explain this whole SP/DP thing I believe.

You may be referring to the following series' checklist, but each checklist (except the 1st) was actually part of the previous series.