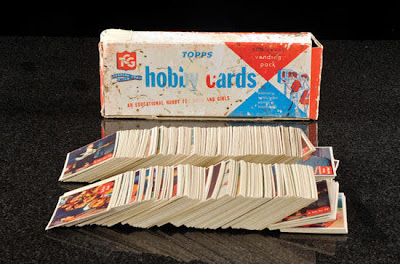 The Trading Card Guild livery is very much in line with the times as Topps preferred, when moving product without gum, to use that clever alter-ego.  The red, white and blue color scheme is also in line with the Shorin family's penchant for patriotically themed graphics, which go back at least to the American Gas Station days during the Depression.

Elvis was a scant 66 cards in length and you would think a vending box would yield  6 or 7 sets but the collation on these  was often quite poor so even one set full set lurking within might have been pushing it.  I have to think this poor collation was done deliberately by Topps to keep the kids buying more cards in a vain attempt to complete a full set.  There would also be myriad centering issues, as was the norm at Topps for decades. Still, a vending box or two of any vintage set would be great fun to rifle through.
Posted by toppcat at 4:56 PM