Well, as I well suspected, I am not the only person out there who likes and collects the obscure Topps issues from even the most unknown sets. A while back I posted on a set of insert cards issued in 1970 called Racing Track Cards. These came with the Mini Model Cars of the same year and were designed to be put together like a puzzle to form a race track for the mini models. A collector named Bill Cox has been piecing together the race track and is just shy of being halfway there (21 cards comprise a full track): 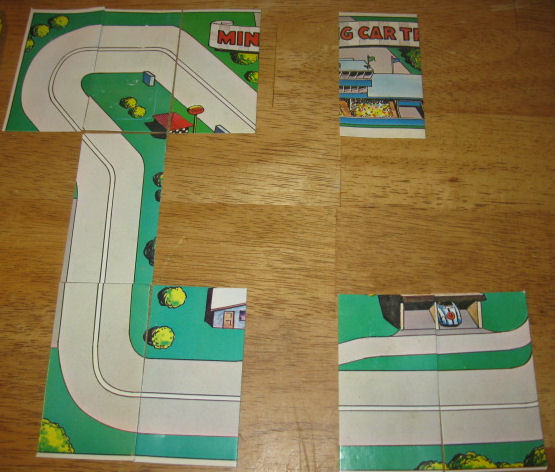 I have traded him a piece he needs and am also going to nab a Soda Fountain Car Card from him, which I will show here of course once it's in my sweaty little hands.  Those were issued in the same packs as the race track pieces but there  are only 12 cards in that subset.

If anybody can help out with the remaining pieces for Racing Track Cards or the Soda Fountain Car , I can pass a message on to Bill.  I think it would be cool to see the completed track and he indictaes he has extra pieces to trade.
Posted by toppcat at 1:46 PM

I have over 100 packs of these things in my basement. They are doing nothing but collecting dust and I would be willing to sell some, many, heck all of them.