One Of These Things Is Not Like The Other One

Dating anomalies fascinate me.  No, not like Lyle Lovett and Julia Roberts when they were courting, but when dates of issue on a set are seemingly off by a year or so despite evidence to the contrary.

One that caught my eye recently was the 1953 Topps License Plates issue of 1952. You probably just went "Huh?" huh?  Well it's pretty simple.

We've seen the set before but here's a peek at one of the cards, a non-state as it were, at least at the time: 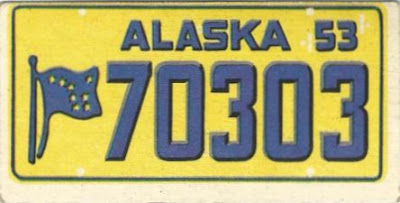 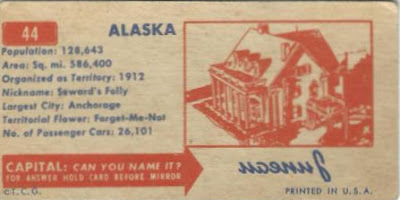 That Alaska License Plate is a reminder of how Topps stretched 48 states plus DC into a 75 card set. Those 49 plus the one above made 50, which would have been a nice round number but Topps was also interested in selling the set elsewhere, so 9 Canadian Provinces (missing was Newfoundland & Labrador, only established in 1949) 4 Australian States (2 missing for no good reason at all), 3 Swiss Cantons (what?) and 9 additional countries filled things out. 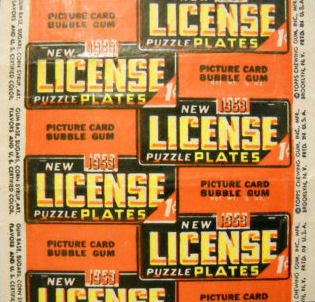 One cent Topps packs generally did not carry copyright dates but some of their nickel packs did back then.  This Canadian five cent wrapper clearly has a 1952 copyright date and no "1953" reference in the graphics: 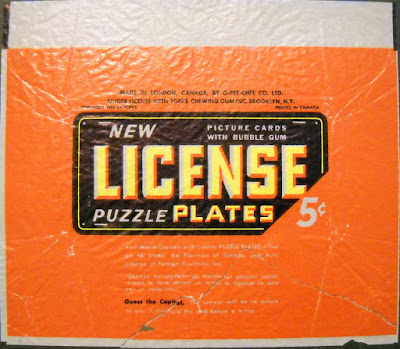 A lot of extant Topps non sports five cent packs and wrappers from 1948-53 or so hail from Canada, as do many cards, including baseball and hockey.  I assume a jobber or five held returns and that they were eventually discovered but what's interesting is that these finds have occurred across the country and are not isolated to one geographic area. Others probably languished in the US, never being shipped out to begin with but if you see an "elongated" five cent wrapper or pack from this time, chances are it came from North of the Border.

In the end, the date is actually not that big of a mystery.  Sets that were intended to be issued early in a calendar year would sometimes be copyrighted very late the year prior. Furthermore, new car models would come out well before their designated calendar year. I just liked this one as the 1952/53 juxtaposition is pretty obvious.