So a short while ago I posted about some Mexican issued Topps cards from the mid 70's.  Part of that post mentioned that some Planet Of The Apes cards were known (but not seen) and that such set likely was hawking the TV show, not the movies.  Well thanks to Friend o'the Archive Scott Gaynor we now have more details on this set and a related, even more interesting set (or two)!

Scott's take on the POTA cards is that they came from an executive the Topps plant in Duryea (where have I heard that before?!) and he only had a couple of sets, since sold off (about 16 years ago now) and no scans or pictures.  So I'm still looking for more details on that particular issue.

What Scott did have scans of though, were these bad boys: 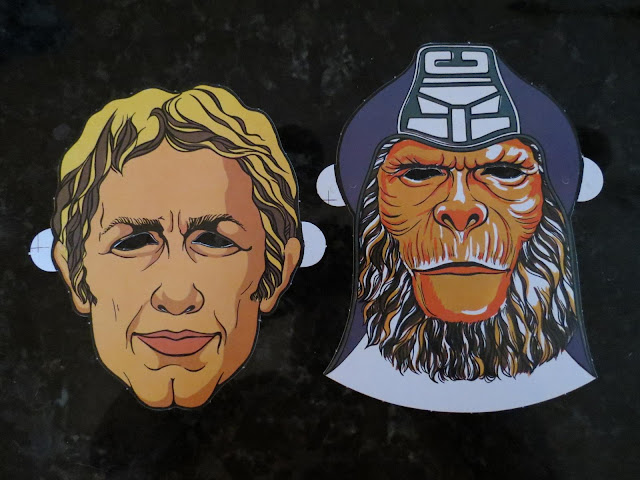 He thinks there were three to the set, which was clearly promotional.  Intriguingly, he also had a back scan: 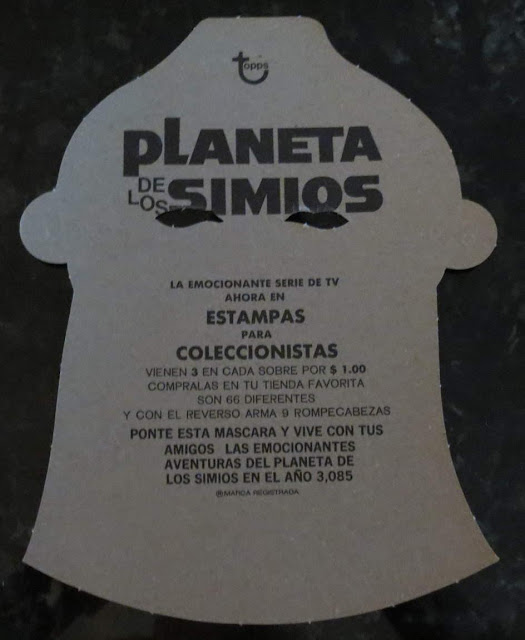 I ran those bits of Spanish on the back through Google Translate and got:

PLANET OF THE APES
The exciting TV series, now in stamps for collectors come 3 in each envelope for $1.00
Buy them in your favorite store
They are 66 different and on the back 9 puzzles
Put on this mask and live with your friends the exciting adventures of
The Planet of the Apes in the year 3085

OK, the big question of course is whether or not the stamp set is the same thing as the card set Scott remembers. I have a another question in mind as well, namely did Topps ever produce a US version of these masks? I hope so because I'm thinking a US version would be a lot easier to track down than the Mexican examples. Those masks are really quite nice!