So I was perusing the Mile High catalog for the March 10th auction the other day and noted a neat partial uncut sheet within, for the 1968-69 O-Pee-Chee Push Out Stickers. I went to the website to grab a scan but the lot (#600) appears to have been withdrawn.  So I scanned the catalog image instead since it's such an interesting piece, which I will get to momentarily.

The stickers were inserts with the regular OPC cards from the 1968-69 season and had 22 subjects. 21 of these were player images superimposed on a hockey puck and you had to "push out' the puck and then lick the back (like the original 1967 Wacky Packages) to get it to stick to something: 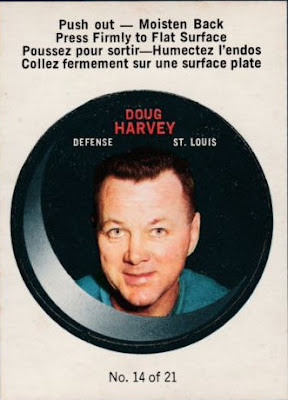 The whole back was ready for expectoration: 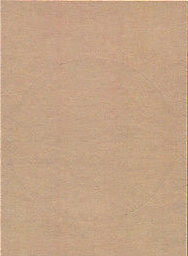 The 22nd sticker was a salute to Gordie Howe for scoring his 700th goal. It's quite the sticker actually: 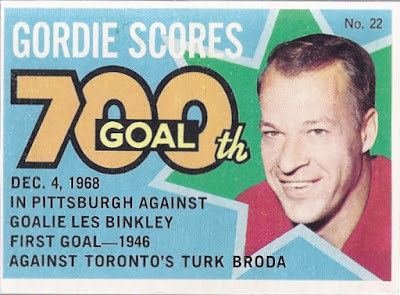 There was no push out option for Mr. Hockey, but his back was gummed so I guess the whole enchilada could have been stuck anywhere! You can see how this special sticker was produced with the rest of the insert set: 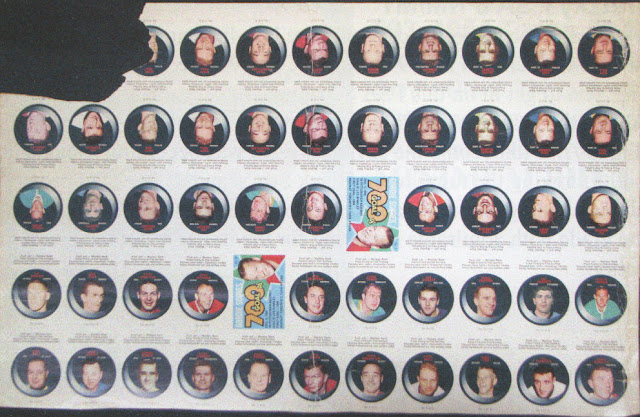 That is definitely a partial sheet. There is no bottom gutter and it's clearly hand cut down there. As the stickers are standard sized, my guess is at least a 66 card sheet was made of them, if not the ubiquitous 132/264 array.  A 44 sticker partial also exists.

It's too bad more sheets don't exist.  More used to but many have been cut up for grading over the past couple of decades. I prefer 'em like my Blu-Rays: uncut!

Email ThisBlogThis!Share to TwitterShare to FacebookShare to Pinterest
Labels: 1968 OPC Hockey Push Out