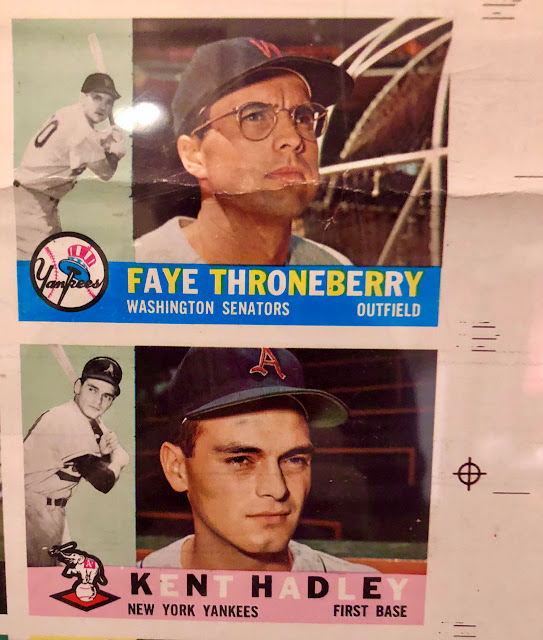 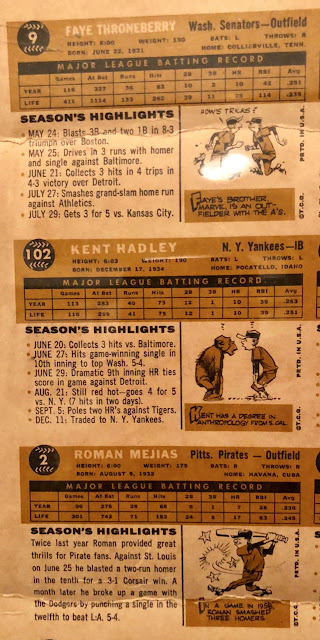 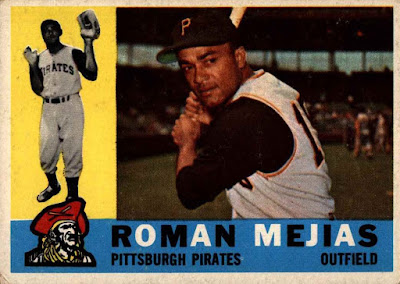 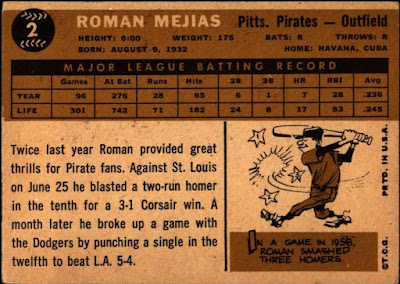 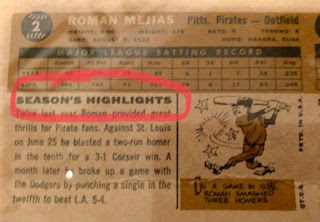 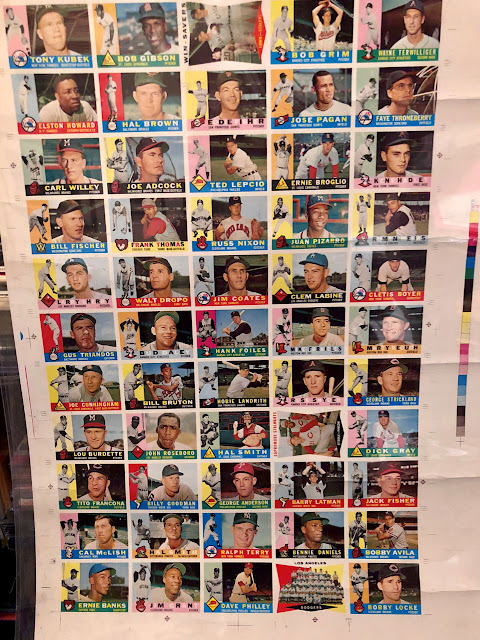 And that’s the proof that they’re all proofs.
For Gelman’s claim to be true – that seven copies each of Cimoli, Hadley, and Throneberry made it into card packs and were issued – we have to assume that one of two explanations is also true:
A) the other variations on the sheet, on 22 different cards, for a total of 154 copies (plus whatever variations might have existed on the separate sheet containing the Cimoli), either never made it into the packs or, while a couple of Cimolis and Hadleys have changed hands in the last 20 years, none of these 154 cards has ever appeared in an auction or an article or on eBay or even in a rumor somewhere or nobody ever noticed them and they’ve been sitting in piles of commons for 58 years. Either that’s true, or:
B) those other 22 far more subtle errors and only those 22 errors were found on the proof sheet and corrected before the issued cards were printed. But somebody at Topps decided to let Cimoli, Hadley, and Throneberry proceed with big glaring errors intact to the publication stage and only then after exactly seven sheets rolled off the presses and through the cutting machine and into the packs did somebody yell ‘stop the presses’ and fix them. More over if the cards were “issued” why would John Rumierz have had to have gotten them from Bill Haber when Haber worked at Topps in the ‘70s or ‘80s? Why would there still have been any more copies at Topps?
In theory, “B” could have happened. But I’d say the odds against are far higher than another wild explanation: that when Woody Gelman wrote “seven of each were issued” he meant “seven of each were issued by me.”
Posted by toppcat at 8:00 AM

Awesome information, Keith (and Dave). I am a Cardinals collector, and will probably never see a Cimoli.

Theory B is sort of true. I was a 13-year-old in 1960, and a pretty sophisticated card collector. My father was spending serious money on his stamp collection, and I already understood condition, scarcity and provenance. I subscribed to The Card Collector newsletter and corresponded with numerous collectors and sellers around the country. Sometime in late 1960 or early 1961, an ad appeared either in The Card Collector or a Card Collector price list, stating that only 7 each of the Cimoli, Throneberry and Hadley error cards had been printed, and were offered for $1.00 each. I immediately placed my order, and received one of each – which I still have now in safe deposit! These are regular cut cards, not proof sheet or hand-cut.

I even saved the two mailing envelopes these came in, with their 3-cent postage meter stamps. I also have a couple of letters (on other topics) from Woody Gelman himself, as well as a large number of The Card Collector newsletters, plus price lists and correspondence from many other collectors of the 1960s. I’ve looked through my old materials for the error cards listing, but haven’t found it so far.

I’d be most curious to have an estimate of the three error cards’ value. My guess would be whatever they’d bring at auction.

If you have any scans of Woody's letters, would love to see them.

Hey toppcat - I've scanned one of my Woody Gelman letters but see no way to upload it to this site. Any ideas? I'm a member of several Facebook vintage card collectors' groups.

You send it to the gmail link, it should show on the top right of the page in web view.