A trove of Topps Presentation Boards was auctioned on eBay a couple of months ago and it was, to put it mildly, a diverse lot.  These do pop up from time to time but this batch was particularly large and also had a geographic reference to its location in Honesdale, PA (in an attic, no less), which is about 40 miles from where the Topps plant was in Duryea.

I'm not sure about the process of presenting with these boards-it seems likely they were meant for Topps brass in Brooklyn, but most seem to originate near Duryea so I could have that backwards.  Or they just ended up in Duryea for storage and went home with people at various points in time.  This latest batch looks to cover a period beginning in the mid 70's and running into the mid 80's.

Here's the full Monty-you can plainly  see the wide range of products and years: 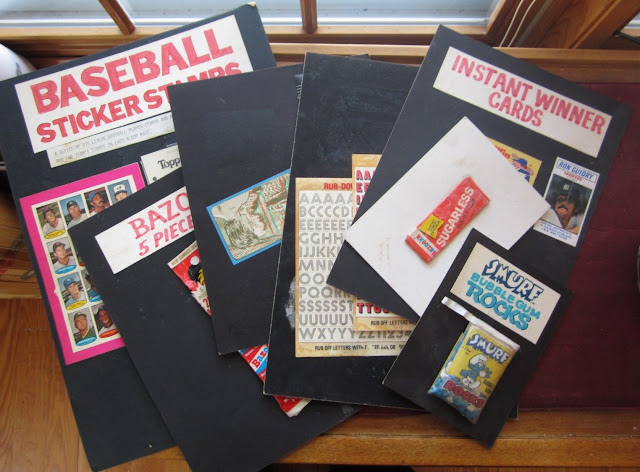 Let's start with the baseball proposals.  The first is, without a doubt, what evolved into the 1974 Baseball Stamps issue.  It looks to me like the stamps (or stickers, depending) were already designed and the presentation was to nail down the album concept: 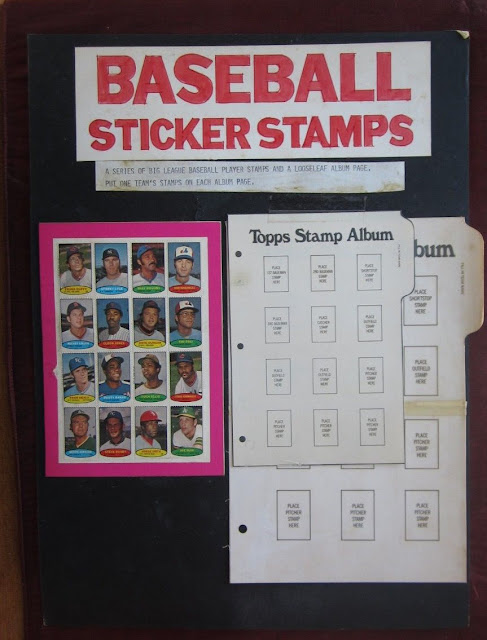 The stamps would ultimately be issued in a 2 x 6 array and the albums ended up being shrunk down from the proposal, which went as big as looseleaf pages.  We know Topps had been working since 1970 on a full size sticker release and it looks like the 74's got pretty close to realizing that concept.  What's unfortunate is that the stamp set seems like it failed-stamps were dumped or had issues in production and the albums were not produced in quantities to match.  In fact, the 1974 Baseball Stamp Albums are pretty tough to find these days while the stamp sheets are a breeze.

Meanwhile, we see an intriguing Hit to Win mockup that closely resembles the (different) contest cards inserted in the 1980 and 1981 Baseball packs. 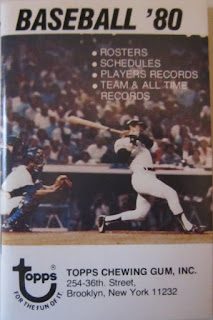 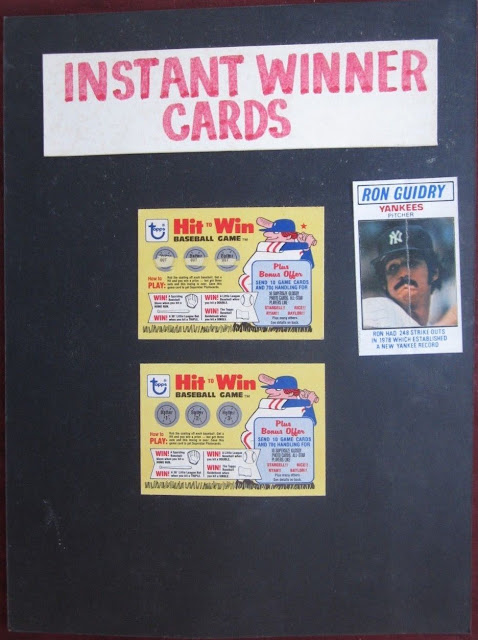 Check out the Guidry mockup-Did Topps intended for the cards to also include a player insert or have a two sided insert?  Seems like the Guidry part of the pitch came very late.  Or maybe it was intended to show some detail from the Baseball Guidebook offered as a prize for hitting (scratching off) a single in the game.  Either way it's a neat, unique Yankees piece. Never seen the guidebook?  Here ya go: 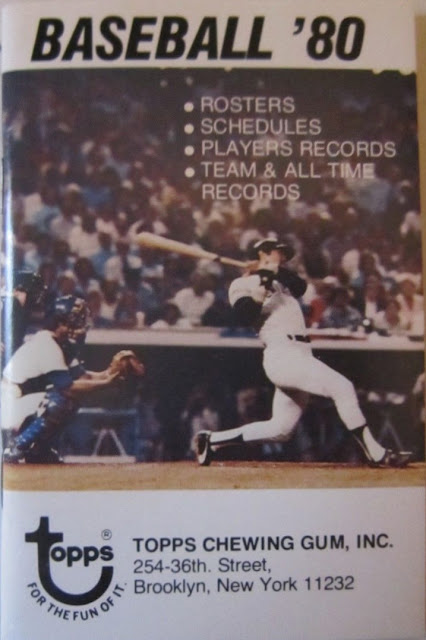 This concept seems a bit mundane: 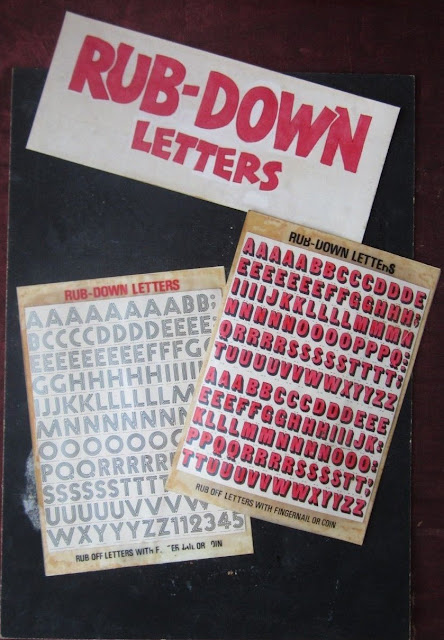 More intriguing, although out of my wheelhouse in terms of scope (I tend to end things here at 1980 so don't profess much knowledge beyond that year) and subject (Smurfs? No....) but the gum sure resembles some old Topps product like Rock's O' Gum. 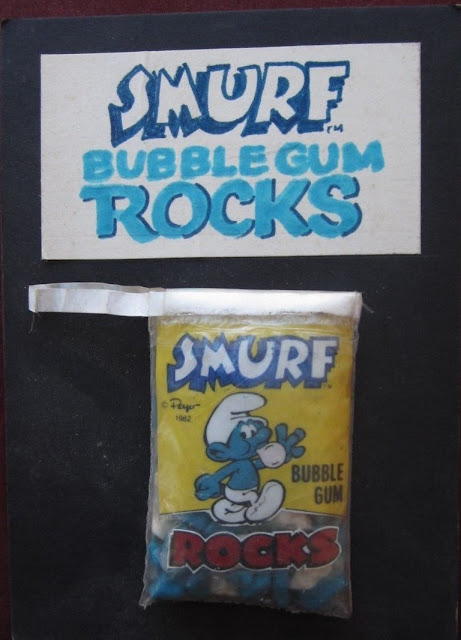 To me though, the most interesting proposal had to do with a 3-D set: 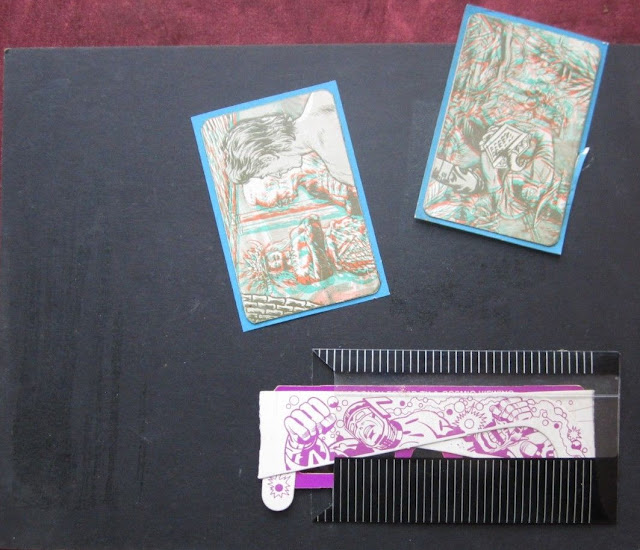 Those are the fronts of two 1953-54 Topps Tarzan cards being used to show a new concept-check out the artwork for the proposed 3-D glasses:

That very much looks like Jack Kirby's work, or heavily inspired by it. Joe Kubert actually did the line art for the Tarzan sets (note-under investigation, see comments) so if it is by Kirby, it's a nice tie-in of two legendary comic book artists. Can anyone ID the superhero? He looks like a Marvel product of the times but my comic book knowledge is pretty much kaput these days. The original title is no longer with the board so it's anybody's guess what the product was supposed to be I guess.

Decades after they were created, the boards show the creativity and thought processes that went into designing and issuing a set of cards or inserts in the pre-digital design days.
Posted by toppcat at 8:00 AM

You are correct. The art is by Jack Kirby. In 1982 Kirby drew a 3-D comic book produced by Ray Zone, Battle for a Three Dimensional World. While I have the comic I don't seem to have the original glasses that accompanied them, but the pair I've seen on Ebay look like the same one as yours, although this one has Kirby's name on the side. Could the glasses you show been part of a proposal from Ray Zone to Topps?

Incidentally the Tarzan art appears to be the work of Dan Spiegle, not Kubert. Spiegle worked at Western/Gold Key and drew Korak, Son of Tarzan, among many other comics.

Thanks for this excellent blog. I grew up with Topps cards in the 1960s and 1970s, write about comic books and their creators and recently wrote about neighborhood candy stores and included info on Topps (and other non-sport) cards, Bazzoka Joe and other items I and other Broolyn-based kids collected.

Here is a link to the cover and contents of the original 3-D comic: https://www.comics.org/series/2693/

I've got some type of evidence Kubert did at least some of the Tarzan cards around here somewhere-I wonder if there was more than one artist involved? A little more of the story is here: http://toppsarchives.blogspot.com/search/label/1953%20Topps%20Tarzan%20And%20The%20She%20Devil

Just read your blog piece-nicely done. I have an R. Crumb themed post coming up tomorrow and am working on a longer form piece or pieces about Woody Gelman and his "stable" of artists in the 60's and 70's.

Thanks for your very informative comments!

Nick-would you e-mail me please (addy is in my profile), I have a couple of questions if you can stand it and can't find a good link to e-mail you on your blog. Thanks.

Thanks for the kind words. Looking forward to the Crumb post. I couldn't find your email link but feel free to contact me at caputon66@aol.com