Yonks ago, I posted a round of correspondence between Woody Gelman and Robert Crumb just after the debut of Zap Comix in late 1967 or early 1968.  Woody, in fact, received 25 copies of the first printing of this infamous and influential underground comic. To put this in perspective, a near mint copy of this comic is worth about twenty grand today. But I digress.

Crumb and Gelman look like they had a fairly close relationship, no doubt as a result of Crumb's employment by Topps in 1965. I have no idea how long they corresponded and in fact, I think a good deal of Crumb's early letters post 1964 have been lost or are unavailable to the masses. His existing letters from 1958-1977, which are very light post-1964, have been collected in book form in case you are interested.

Well, I stumbled across the letter Crumb sent back to Woody after receiving his check for the 25 issues of Zap (plus a bit extra as a gift upon the birth of Crumb's son, Jesse). The letter was even accompanied by an "almost" illustrated envelope, which is still a doozy:

That's the address of Card Collectors Company. Woody actually lived one town over, in Malverne. 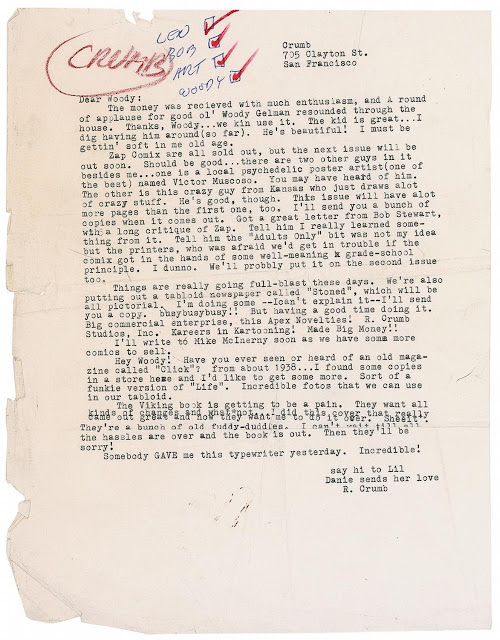 Let's navigate this sucker, which I found over at www.icollector.com.

Woody filed these, hence the circled "Crumb" in his distinctive red crayon.  Len Brown, Bob (actually Bhob I think) Stewart, Art Spiegelman and Woody all got to see it circulated at the Topps offices in Brooklyn from the looks of things.

Crumb has misspelled Victor Mocsoso's last name, even though he was a Zap contributor. Moscoso is one of the most famous psychedelic artists in the world.

The crazy guy from Kansas has to be S. Clay Wilson, who was about to move from Lawrence to San Francisco to be with the Zap team.

I'm not sure the "Stoned" newspaper ever took off, although it may have semi-manifested in some later collaborations, most prolifically "Weirdo!", which was considered an artistic bust when it debuted in 1981 and which Crumb abandoned after a year or so, although it soldiered on for a while.

Mike McInerney was someone in New York Woody put Crumb on to in the hope of assisting with distribution on the East Coast; Crumb had inquired in his first letter to Woody regarding assistance in this area and McInerney, who was also vital in 1960's Science Fiction fandom, ended up moving to San Francisco in 1969. It seems Woody started that wheel turning!

Don Donahue's Apex Novelties was the underground publishing concern that printed Zap. It is legendary in a number of ways.

"Click" commenced publishing in 1938 and was "The National Picture Monthly". This link will lead you to a reprint but with some detail of the contents of a typical issue.

Jesse Crumb died in a car accident at the age of 49 unfortunately.

Crumb divorced his wife Dana in 1978, the same year Woody would pass away.

I've said it before and I'll say it again-Woody was the man!
Posted by toppcat at 8:00 AM