Saw It In The Funny Papers

Topps had a tradition of reselling and/or rewrapping excess inventory just about from the get-go, with their first bulk discount occurring in early 1950, as this ad I've previously posted from Billboard (4/29) shows.  Sorry for the yellow highlights, I can't find my original scan to convert it back to good ol' black and white: 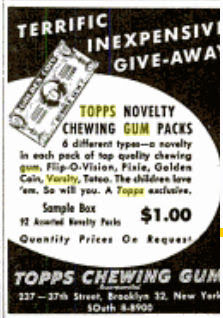 Topps ran that ad for a few issues in the late winter and early spring of 1950, no doubt burning off returns or unsold inventory.  I suspect they had lots of their original penny tab packs - with a single tiny card inserted between the inner and outer wrappers - left over as they transitioned to a larger size card (the second of five within three years) and more sanitary packaging.

That Novelty Pack had a couple of nickel packs as well (Golden Coin and Flip-O-Vision) removed by the time Hallowe'en rolled around that year and 30 tabs were offered in a smaller configuration.  I believe this is the first of the annual Topps Hallowe'en campaigns and the first mention of "Fun Packs" by them:

They clearly had a lot of volume to move-that gum must have been stale as those packs were all sold in 1948-49!

1950 is clearly documented Fun Pack-wise but 1951-64 is not!  I'm not sure how Topps sold their bulk discounts for Hallowe'en in that span but suspect it was mostly leftover penny packs.

In 1965 (possibly a year earlier according to the TPG's), we see the beginning of the more traditional Fun Packs, where they got their own wrappers. These usually held individual cards and a slab o'gum but in at least one season, cello packs of the ultra-rare Flash Gordon cards lurked within.

I believe that pack was used through 1966 but it's most commonly referred to as 1964 or 1965. I have not been able to find a dated version of it as of yet but here is a 1965 Hallowe'en catalog page showing the above style pack: 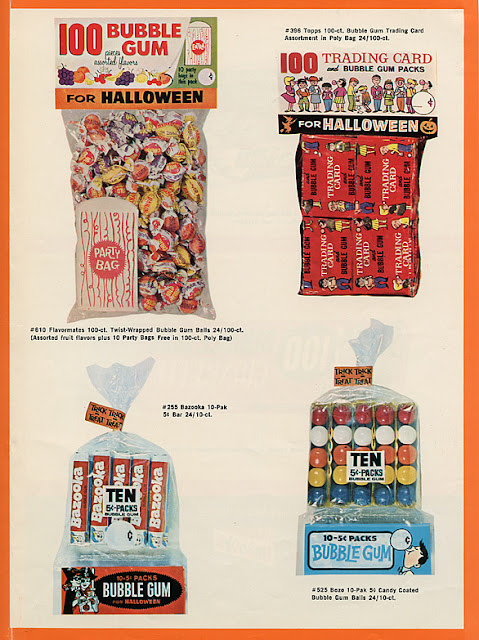 As an aside, the top left bag, dubbed Flavormates, is interesting.  I believe the twist wrapped pieces just say "Bubble Gum" and Topps didn't file for a Trademark on this brand until 1969 but had been selling it since 1963. Too bad there's no Blony on the page, it would run the full gamut of Topps bubblegum if it was!

That curved Topps logo on the Fun Bag only started appearing in 1966 and the below wrappers clearly cap the above style in 1967, although they may be a version without a commodity code out there. 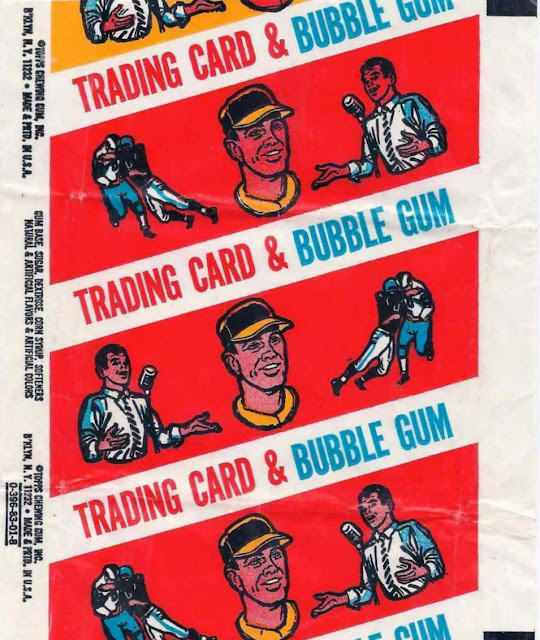 Here's the yellow version (with a 1968 Baseball card within).  I think the orange sliver above is an oversaturated scan of the yellow: 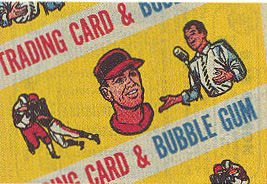 You can see the commodity code ends with an 8.  The Brooklyn address would change the year following, resulting in a code indicating 1969: 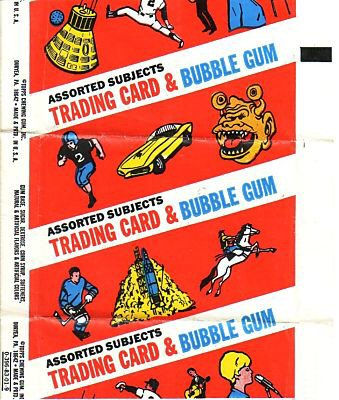 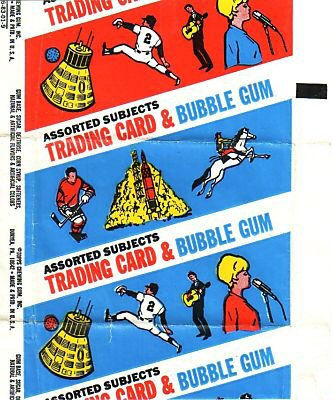 Note the address change to Duryea, which led to a new copyright filing and design.

I'm not sure when these stopped being used.  Topps would sometimes use a regular issue pack with two cards in it for some of the Fun Bags, as they would designate the bulk package, and possibly even some cello's, which I seem to hazily recall getting in my trick or treat bag as a kid around 1970 or so. These 1974 Football packs had the two card monte going on; I believe Creature Feature and Kung Fu also got this treatment. 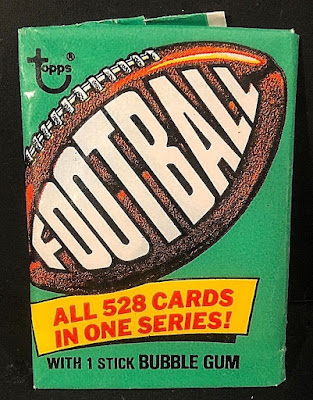 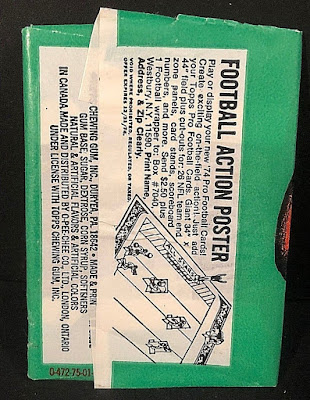 1976 brought a new and very colorful design.  This top one has a 1977 Football card within so they got multi-year use out of these: 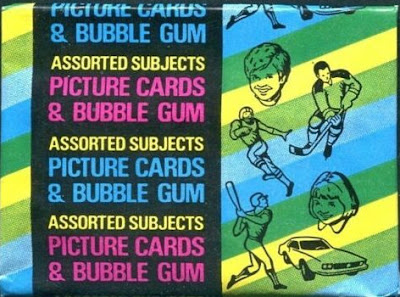 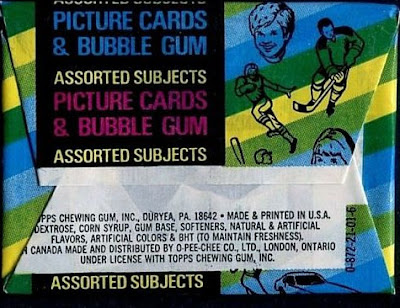 The color permutations are super groovy and these are described in my notes as containing 1981 or 1982 cards while still retaining the 1976 commodity code:

The Fun Bags could also hold regular issue wax and various types of cello packs and I think that practice became more common as the 1970's and 80's wore on. I'll look at those in a follow up post some time soon.

My first encounter with fun packs was 1962. That year two cards were put in unwrapped. My teaser cards were from Civil War News, so I bought a fun pack. There wasn’T another CWNcard in the bag. All I ended up with was a “ junky” looking set of Mars Attacks, about 20 extras, and some 1960 FB. The Mars Attacks set sat in drawer for several years. Was I surprised when I discovered it’s value later on