Topps spent a fair bit of time getting their cloth baseball stickers down in the 1970's.  Finally seeing the official light of day in 1977, there were materials tests undertaken in 1970, 1972, and 1976, plus a series of 1973--74 Cloth Emblems that spanned a few sports, not to mention the 1968 Football Paches and some non-sports issues. I'm not sure why it proved to be so difficult for Topps to work up proper specifications for the national pastime, those '68 Football Patches have held up remarkably well, although most of the press ended up being rescued from a Pennsylvania dump along with the black and white Football Team cards test issue they were packaged with. And let's not forget their 1949 Flags Of All Nations/Soldiers Of The World issue which used a similar cloth-like material.

I've covered the 1970 and 1976 cloth stickers previously and the former are famous hobby rarities, while the latter are not.  The 1977 set needs no commentary today, it's still found in abundance and is, to my mind, quite nice. I may do a post on it shortly as the checklist/puzzle cards that came with it are harder to find and kinda neat as well.

I remember seeing a few of the 1972 Cloth Stickers at shows in the 80's in uncut form, which is how all of these have entered the hobby. I'm sure they came via a Topps back door somewhere, possibly in the outflow of Card Collectors inventory following Woody Gelman's death in 1978, and which took some time to disseminate as the earliest mention of these I can trace so far is from 1981. The sheets were fairly reasonably priced back then, not so today due to the Roberto Clemente In Action being included in the array and a lot of times you find them with the plain sticker backing gone or discorporated.  Some are missing a slice across the top of the sticker as well. Still, they are pretty cool.

Unlike 1970, which came from a specific half sheet section and 1976, which was Frankensteined by Topps using only Duffy Dyer and Bob Apodaca, the 33 sticker run spanned two Topps half sheets from the 3rd series in 1972.  It also includes partials on either edge, echoing the 1970 version in this regard:

I don't know why Topps took things to test from across two sheets like this but it's quite common in their history.  Here's a  look at some real estate from a normal 3rd series sheet: 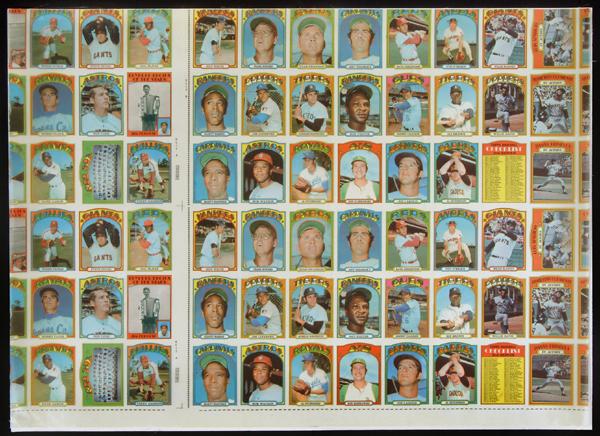 You can see how the imaged cloth sheet was just the bottom three rows of this section - Topps printed 66 cards from each 1972 series on one half sheet and 66 cards on the other, with the DP checklist for the next series on all but the high number sheet (132*6=792-5 DP's=787 card series) in '72. The top row is interesting as well as the stickers I have seen with the slice taken off the top seem to come from that row, which is indeed short on this regular issue sheet as well. This could truly be coincidental as I'm not sure why a card board version missing real estate would be replicated in cloth.

Here is the checklist:


Four Hall of Famers and Willie Stargell In Action and Sparky Anderson are partials on the uncut sheet....what could have been!
Posted by toppcat at 8:00 AM